GODZILLA AND MOTHRA: THE BATTLE FOR EARTH (1992) 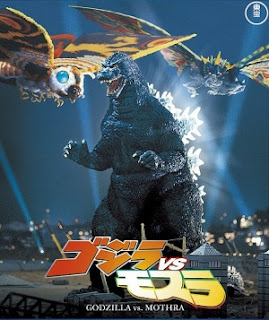 
I goofed when I stated that I had reviewed all the stories in the Heisei GODZILLA series except for GODZILLA 1985, for I belatedly realized I hadn't done this film, either.

Structurally, GODZILLA AND MOTHRA is similar to their two monsters' first crossover film, 1964's MOTHRA VS. GODZILLA. Once again, there's slightly more narrative attention paid to the mythology of the colossal caterpillar/moth than to the cranky green reptile. But this time it's because the project was originally supposed to be all about Mothra and his dark twin Battra. Patently Godzilla was merely written in for purposes of marketing, so although his battles with the two giant moths are better than average, Godzilla himself has no raison d'etre beyond being Mean and Green.

Of all the films in the Heisei series, this one has the most engaging human characters, particularly a divorced couple that ends up re-bonding over the battle of titanic kaiju.  Takuya, an unusually impolite Japanese explorer, gets dragooned into joining an expedition with his ex-wife Masako. The expedition, funded by an unscrupulous corporation, voyages to Infant Island, home of Mothra, the tribe that worships him, and the minute twin fairies who act as spokespersons for the giant caterpillar, who are now styled "the Cosmos." Though there are agents in the group who merely want to harvest a Mothra-egg for profit-- thus proving that no one in Japan learned anything from the 1964 film-- Masayo and Takuya are intrigued by the Cosmos' revelation that the fairies also represent a long-vanished, super-scientific civilization, strongly reminiscent of Atlantis. This civilization was wiped off the face of the Earth by Mothra;s destructive twin Battra, and Mothra had to fight his twin to keep Battra from wiping out all of humankind.. After being defeated, Battra fell into a deep sleep, but the fall of meteors to Earth has reawakened his menace-- as well as Mothra's other famous enemy, the Big G.

After some exploration hijinks for Masayo and Takuya-- which, for a change in a kaiju film, are actually amusing-- their unscrupulous cohort Ando arranges with his aides to steal a Mothra-egg, taking it out to sea with the aid of a freighter. However, both the re-awakened monsters home in on the freighter. Battra battles Godzilla, apparently just out of sheer orneriness rather than out of concern for Mothra. But the delay gives the egg the chance to hatch, and a new Mothra is born.

The human party manages to make it back to Japan, where the CEO of Ando's group does what CEOs usually do: he grabs hold of the twin fairies to use them for evil merchandising purposes. Naturally, Mothra invades Japan to rescue the Cosmos fairies, and Battra and Godzilla follow in due course.

The two moths join forces against the big reptile, resulting in one of the most colorful titan-battles in Japanese film (partly because the moths use colorful dust as a fighting-technique). Godzilla is defeated (temporarily) and the moths attempt to drop him back in the ocean. Before being dumped off, Godzilla wounds Battra fatally. Then, at the eleventh hour, the fairies reveal that Battra's true destiny was to destroy a big asteroid fated to annihilate Earth. However, say the fairies, it's all good, because Mothra can and will destroy the asteroid, which comprises the film's climax.

The last-minute revelation that Battra had a "good" purpose during his long sleep undermines the original concept that he was a destructive deity provoked into action by humankind's excesses. I surmise that if Godzailla hadn't been inserted, maybe Battra's mythic persona would have remained more consistent. But BATTLE FOR EARTH still ranks as one of the more enjoyable films in the Heisei series.
Posted by Gene Phillips at 3:39 PM
Email ThisBlogThis!Share to TwitterShare to FacebookShare to Pinterest
Labels: combative dramas, the marvelous