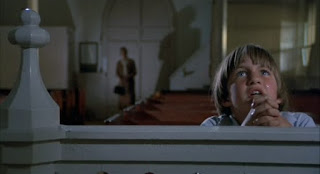 The big "reveal" of THE OTHER-- though it takes place roughly halfway through the film-- is that although the viewer sees two twin kids (played by sibling-actors) at the story's outset, there's only one living boy, Niles, who is constantly imagining that his dead brother Holland is around. Further, Niles performs a host of malicious acts that he attributes to Holland, much in the same way that Norman Bates attributes his actions to "Mother."

I have never and probably will never read Tom Tryon's 1971 novel, but since Tryon himself adapted his own novel for the film's screenplay, it's likely that there are no tremendous differences between film and source-novel.  The action takes place in a rural part of America in 1935, on various neighboring farms, one of which is owned by the Perrys, consisting of Niles, his frail mother, and his somewhat superstitious grandmother Ada. None of the other locals, despite their experience with planting, are capable of understanding the "bad seed" in their midst.

The script doesn't give a lot of detail as to what makes Niles so bad, though his grandmother has encouraged him to imagine himself flying in the body of a bird. In addition, she's inculcated in Niles an absorption with angels coming to bring mortals into the realm of death, so it's at least possible that Niles has never learned to distinguish between life and death. He brings about calamity after calamity, including dooming both mother and grandmother, though always with no sense of overt malice. Niles always seems blissfully innocent, in contrast to the original "Bad Seed" of theatrical/cinematic fame.

Director Richard Mulligan opts for a gradual approach to horror, giving the bucolic surroundings a look of pristine beauty, although he finds ingenious ways to insert images of unsettling aspects of nature or man-made artifacts. The downbeat ending of the theatrical release was occasionally modified in TV reruns.

Posted by Gene Phillips at 2:23 PM
Email ThisBlogThis!Share to TwitterShare to FacebookShare to Pinterest
Labels: perilous psychos (u), the uncanny