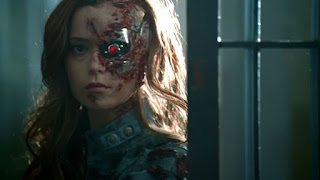 
TERMINATOR: THE SARAH CONNOR CHRONICLES is  a somewhat misnamed series. As producer Josh Friedman points out in the commentary for the show's final episode, he and his team avoided using the name "Terminator" until that last show. (Usually characters refer to the futuristic robots by the term "metal.") Further, even though Sarah Connor (Lena Headey) is undeniably one of the program's ensemble characters, she really has no arc of her own, as she does in the first two TERMINATOR movies (which the series follows, ignoring the second movie sequel from 2003). All the narrative attention goes to the other members of the ensemble, her son John Connor (Thomas Dekker) and his robotic protector Cameron (played by Summer Glau, and named for the writer-director of the films).

Admittedly, James Cameron himself shifted the attention from Sarah Connor, the viewpoint character of the first film. John Connor, the youth destined to defeat the forces of the evil computer-system Skynet, becomes far more important in TERMINATOR 2 than Sarah is. Still, there is a subplot about Sarah's attempt to recover her humanity even in the midst of fighting off yet another killer cyborg, while her adolescent son bonds with a "good Terminator," who becomes the father John never had.

Though the second film strongly implies that the heroes' actions insure that Skynet will never be built, CHRONICLES can only exist if Skynet is still a threat. Thus Sarah and John are still being besieged by cyborgs out to slay future-savior John. However, Future-John, apparently aware that the Arnie-bot from T2 would not be enough, also sends back another reprogrammed robot to help the duo. In a rather confusing narrative move, the trio time-jump from 1999 to 2007, partly to get a line on how Skynet rose despite their efforts. Of course, the time-change may also have been designed to make the characters more relatable to viewers living in 2008 and 2009.

The episodes in which the cyborgs manage to track down the fugitive family, resulting in heavy arms-fire (especially for a TV show), tend to be the least interesting stories. The investigate stories, in which Sarah and John try to track down Skynet's recrudescence, are well-made but not very involving. The strongest episodes are those that follow up on the theme established in T2: the ability of a humanized machine--albeit with some organic material-- to assimilate human forms of behavior. Cameron, whose appearance was copied from a future freedom-fighter named Alyson, gets many of the best lines, for the actress is allowed to shuttle between grim purpose-- she even tells John that there's a "Terminator" part of her that still wants to kill him-- and moments of quixotic humor, as she endeavors to process human cultural practices.

The constant problems of time-manipulation lend the series an intentionally downbeat air, given that the protagonists can never really be sure whether or not their actions solve any problems. Various support-characters come into the mix as well, but none of them prove as interesting as, say, the almost-erotic relationship of Cameron and the hormonally-frustrated John Connor.

Though no single episode stands out as representative of the series' symbolic compass, overall the series admirably continues the dramatic issues raised by the original Cameron films.

Posted by Gene Phillips at 3:49 PM
Email ThisBlogThis!Share to TwitterShare to FacebookShare to Pinterest
Labels: combative dramas, the marvelous