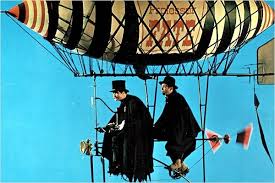 
Like 1952's CRIMSON PIRATE, Blake Edwards' THE GREAT RACE falls into the category of the metaphenomenal only in that it shows characters using technological marvels that are technically possible now but unlikely to have been seen in RACE's turn-of-the-century time-frame-- the combination dirigible-bicycle seen above, a primitive torpedo, a car that exudes a smokescreen long before James Bond's era.

Though RACE is overlong, like a lot of other star-studded productions of the 1960s, it's an enjoyable re-framing of the "mellerdrammers" of the early 20th century, with emphasis on the cliches of state and silent film. Heroic Leslie (Tony Curtis) dresses in white, while villainous Professor Fate (Jack Lemmon) dresses in black. But, rather being crimefighter and criminal, the two are rival daredevils constantly seeking the acclaim of crowds. After showing the various ways in which Leslie wins that acclaim, while Fate always loses out despite his penchant for cheating, the film gets down to a long, cross-continental car-race. To further complicate the contest, suffragette Maggie Du Bois (Natalie Wood) decides that she wants to participate in the race to prove the equality of women. When neither of the daredevils will accommodate her, Maggie gets her own car and tries to compete-- though almost inevitably, she ends up riding with Leslie, and the two end up falling in love, albeit with many arguments and complications. Fate, unlike most melodrama-villains, has absolutely no interest in stealing the hero's girl, only his thunder.

The celebrated pie-fight during the "Prisoner of Zenda" spoof is justifiably the film's most famous moment, though I like almost as much the spoofy western saloon-brawl as well, in which Larry Storch plays a bandit who keeps telling people to give him some "fightin' room" and finally gets decked by girlfriend Dorothy Provine. Curtis plays off his earlier swashbuckling characters with aplomb, while Lemmon puts a great deal of energy into the maniacal Fate, as well as a secondary character, a daffy king whom Fate resembles. It's been said that Natalie Wood didn't want to play the role of Maggie, but she essays the spunky role with as much energy as anyone could have.

I also re-watched the film to gauge whether or not RACE was a combative film. It's not impossible for a work to be combative even if the antagonists are contending via their vehicles, but there's no climactic contest between the cars. Leslie demonstrates a high level of swordsmanship in two scenes, one of which has him out-duel an evil conspirator (Ross Martin), and he has some fights in the saloon-scene, but these incidents seem isolated from the fundamental plot, and so I judge that the film is not combative.

Posted by Gene Phillips at 1:42 PM
Email ThisBlogThis!Share to TwitterShare to FacebookShare to Pinterest
Labels: diabolical devices (u), the uncanny