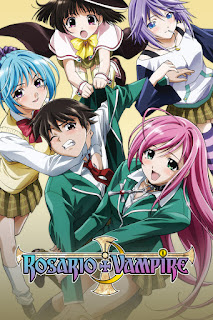 
I have yet to devote any of my comics-writings on ARCHETYPAL ARCHIVE to the Akihisa Ikeda manga series ROSARIO + VAMPIRE (2004-07), for the simple reason that I haven't yet finished reading it. However, there were only two seasons of the 2008 teleseries anime adaptation, so it's easy enough to review.

I have read enough of the manga to state that the anime is only broadly faithful to its source material. Some manga-stories are directly adapted, and all of the main characters appear, but the anime never does a narrative that lasts longer than two episodes, plainly because there are only 13 episodes in each of the two seasons. And while the original manga sports numerous sexploitation tropes, whoever did the anime seemed not to know the adage "less is more." ROSARIO the series is filled with so many gratuitous panty-shots that it manages the signal feat of making them all rather boring. In addition, whereas the manga-series uses comic elements but has more of an adventurous tone overall, the anime is pure "harem comedy."

Teenager Tsukune Aono has such low grades that he can't get into any prominent high schools. By chance, he enrolls in a private school, Yokai Academy, only to find that it's a school that exists in an otherworldly dimension. The inhabitants of the dimension are all monsters-- some Japanese, some Western-- and the students at Yokai, though they all appear as human beings, are learning how to emulate humans in order to move among them without being detected. Tsukune can't initially get away from Yokai, and then he meets a female monster, vampire Moka Akashiya, who makes him want to stick around, despite the threat to life and limb. In the first episode Moka learns that Tsukune is a human being, and she helps him conceal the fact from the other students-- including three other female monsters who find Tsukune to be endlessly enticing: succubus Kurumu, snow-woman Mizore, and witch Yukari (who, in keeping with many Japanese serials from the nineties on, is a "lolicon" middle-schooler who constantly embarrasses Tsukune with her attentions). The five of them become friends who belong to the same club, and the four monster-girls are frequently called upon to defend the powerless human from other monster-students. Of the four, Moka the vampire is indisputably the most powerful, and most of the episodes conclude with her clobbering an enemy who's conquered all other opposition. Each trouncing, and the number of seconds it takes, is announced by a bat-narrator, a device that becomes so tedious that one soon welcomes the couple of times that Moka gets knocked around by a superior antagonist.

On top of all of these "harem comedy" tropes, Moka is also a bit of a Jekyll-and-Hyde as well as a Dracula. When Tsukune meets Moka, she seems to be a sweet-tempered Japanese girl who wears a curious cross-rosary around her neck. He soon discovers that the rosary subdues Moka's "Mister Hyde" persona-- the one she was actually born with-- and that, though she can't take it off herself, Tsukune can, and whenever he does, the powerful, arrogant side of Moka emerges to smash down any and all enemies.

The manga series was able to investigate these potential S&M aspects in much greater detail than the series can (though the closing montage works in a fair amount of nudity and chains). About the only episode which gets as wild as the manga is the first-season episode "Math and the Vampire." The story, in both manga and anime, suggests the pressure high-school students feel to excel in subjects like math, for Tsukune is briefly enslaved by evil teacher Ririko, who dresses in sexy outfits but apparently only gets turned on when her favored student mindlessly spouts mathematical theorems. Appropriately, Ririko's form is that of a Lamia, which in Greek mythology was a female creature that murdered children.

Only the first season follows the plot-line regarding Tsukune's dilemma about trying to romance Moka while not exposing himself to other students as a trespassing human. The other members of the harem find out Tsukune's identity at the end of the first season, and although the producers handle the drama fairly well, the second and last season is devoted to nothing but sex and silliness. It concludes with Tsukune having a big fight with Moka's vampiric father, but it resolves nothing and the series ends by restoring the status quo. My overall finding is that ROSARIO is a watchable if repetitive trifle.

Posted by Gene Phillips at 2:40 PM
Email ThisBlogThis!Share to TwitterShare to FacebookShare to Pinterest
Labels: combative comedies, the marvelous