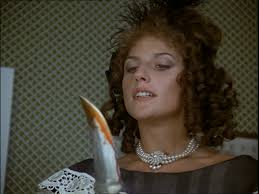 Most of the episodes of the thirteen episodes of 1980's HAMMER HOUSE OF HORROR are at best tolerable time-killers, such as Peter Sasdy's "Visitor from the Grave," or really awful crapfests like Don Leaver's "Mark of Satan." Francis Megahy, though, directed and co-wrote a nice little thriller in "The Carpathian Eagle," with a few interesting myth-motifs mixed in.

To be sure, the mythic content of "Eagle" comes about because the script is seeking to come up with ground its psycho-killer in a medieval background roughly reminiscent of the real-life multiple murderess Countess Bathory. In real history, the 17th-century countess used her aristocratic position to massacre roughly six hundred peasants, possibly for the purpose of using their blood to preserve her youth.

In this telefilm, 1980s England suddenly sees an uptick in serial murders. The police, led by an inspector named Cliff, determine that most of the victims seem to be men who had picked up a young woman. The killer is variously dubbed "the Eagle" or "the Eagle Woman" because the murders are committed with a curved weapon that reminds someone of an eagle's claw, though Clifford seems dubious that a woman could commit such feats of violence.

Clifford has no clues to go on, but a TV interview informs him that a young author named Natalie is about to debut a new book, which tells the sordid history of a Hungarian countess from 300 years ago, who tended to kill people as the modern murderess does. When Clifford asks Natalie where she got her info, the young woman takes the inspector to meet her source, a modern-day London resident, Mrs. Henska, who claims to be the last living descendant of the subject of the book.

According to Henska, her ancestor, unlike Bathory, started her career more "sinned against" than "sinning." She cheated on her husband the Count with a young falconer, and when the Count found out, he not only killed the woman's lover, he imprisoned his wife and subjected her to torture and rape, apparently being inspired to Sadean heights by the countess's transgression. However, the countess manages to mousetrap her husband, calling to her aid a hunting-falcon that claws the nasty ruler to death. It's at this point that the unnamed countess takes on her most Bathory-esque nature, albeit with some additional borrowing from the legend of Cleopatra, who supposedly invited men into her boudoir for one night and then had them killed after they'd satisfied her. Henska emphasized that the countess, whose age is never stated, began inviting young men into her bed and then killing her. That's the last thing Henska can tell Clifford about the ancient serial killer. The part about an older woman killing younger men seems constructed to suggest that Henska might be the killer. Similarly, Clifford also meets another red herring in Henska's nephew, who is a drag performer and thus brings in the possibility that the murders are being committed by someone with gender issues.

The red herrings might make some sense, except that they're not necessary (which is why I'm not inserting SPOILERS). Every murder-scene in "Eagle" shows viewers the face of the killer, and it's none other than Natalie, who looks frumpy in her author-persona but who glams up a lot when she's trolling for guys (including a pre-fame Pierce Brosnan). Obviously there''s no significant difference between the age of Natalie and the ages of her victims, with one exception: once, and only once, she fails to kill one of her intended targets, who unlike the others is at least over fifty. Still, I find it interesting that the script sets up a backstory that emphasizes the archaic monster's preying on younger men, and then translates that into a modern-day killer who still kills young guys but accidentally spares her one potential older victim.

Up until the end the narrative is ambiguous as to whether or not Natalie might be possessed by the spirit of the ancient countess. However, a coda shows Natalie researching yet another female killer, whom she clearly plans to emulate, meaning that in essence she is a "chameleon-killer." "Eagle" isn't particularly deep, but in terms of playing with matters of gender-violence, it hews closer to the better Hammer films than the rest of the "Hammer House" oeuvre.
Posted by Gene Phillips at 3:08 PM
Email ThisBlogThis!Share to TwitterShare to FacebookShare to Pinterest
Labels: perilous psychos (u), the uncanny