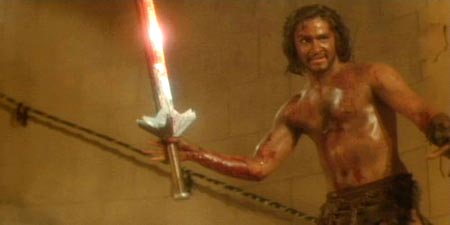 By chance I happened to re-watch two disparate films from the oeuvre of director Albert Pyun, without any plans to set up a mini “Pyun-fest.”

I had mildly enjoyed SORCERER back in its original release, despite its status as an eighties version of a “mockbuster,” being a shallow knockoff of a big-budget release, the 1982 CONAN THE BARBARIAN. Prior to the re-watch, I had remembered SORCERER as fast-paced dumb fun. However, upon viewing the Rifftrax version, I realized how much Pyun filled the flick with dull-as-dirt talking-head scenes. This gave the comedians had ample chances to insert comments whenever the characters were droning on about rebelling against the evil Lord Cromwell. (This particular modern-sounding name shows how much the writer cared about keeping faithful to the fantasy’s archaic character.)

The aforementioned Cromwell (Richard Lynch) makes a deal with evil sorcerer Xusia (Richard Moll) to seize control of all the fair-minded kingdoms of this S&S world. Then Cromwell gets worried about sharing power with Xusia, so he has the sorcerer killed—apparently. While Xusia hides and licks his wounds, Cromwell makes war on the last free kingdom, killing the king thereof. Prince Talon (Lee Horsley) sees the king his father perish, but after he makes an attempt on Cromwell’s life, Talon goes off somewhere and becomes a Conan-like sword-for-hire. It’s not memories of paternal loyalty that finally bring the prince-barbarian back into the fray against Cromwell, but the blandishments of a Resistance spy, cute Princess Alana (Kathleen Beller).

There are various attacks and reverses, but eventually Cromwell captures Talon. Having seen the advance publicity for CONAN THE BARBARIAN, the tyrant decides to put Talon on display at his festival by crucifying this lesser barbarian, because—well, because that happened in Conan. The rebels come to Talon’s rescue, but not before his character commits the film’s most notorious faux pas: simply pulling his hands free from the nails holding him to the cross, and then immediately wielding a sword against his enemies. More excursions follow, bringing Talon into conflict with alive-again Xusia before he has a final death-duel with Cromwell. Oh, and the hero gets the girl.

Though Horsley won’t be anyone’s favorite barbarian, at least he plays the role as straight as possible, and Beller’s willingness to sell her body to a handsome barbarian, however un-PC even back in ’82, adds a little zest to the ho-hum revenge plot. There’s also some nice T&A that you won’t get in a SCORPION KING movie. 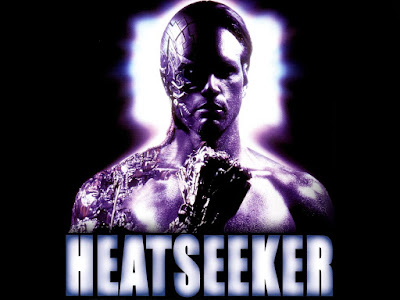 HEATSEEKER, however, was about the same as I remembered it from a previous viewing: just another American martial-arts tournament film, in which huge-muscled guys pound on each other. The story takes place in an alternate version of 2019, where the only important societal change is that massive corporations compete with one another with cyborg martial artists. I think something is said about the corporations getting better contracts if their agents win the fights, but Pyun and his co-writer don’t dilate on this matter much.

However, heroic fighter Chance O”Brien (a barely expressive Keith Cooke) scorns to have his organs messed with, and so fights cyborgs with nothing but his fists and his fury. He scores enough victories that someone decides to let him fight in the Bloodsport Tournament (or whatever it was called). To keep O’Brien from having any advantage, one of the cyborg-fighter’s manages abducts Tina, O’Brien’s trainer/girlfriend. Further, the crooked manager coerces Tina into training his best fighter, Xao (Gary Daniels). This makes for a tiny bit of drama in that O’Brien doesn’t know that Tina has only joined Xao’s team to keep O’Brien safe. But plainly real drama is not on the menu here. HEATSEEKER offers lots of hard-hitting fight-scenes, and it does so adequately, though it somewhat hurts the hero’s relatability that O’Brien, the human, seems to show emotion less well than Xao, his cyborg-opponent. Daniels may not be a good actor outside the chopsocky circuit, but he consistently showed more charisma in any of his films than did Cooke did here.

Posted by Gene Phillips at 12:39 PM
Email ThisBlogThis!Share to TwitterShare to FacebookShare to Pinterest
Labels: combative adventures, the marvelous