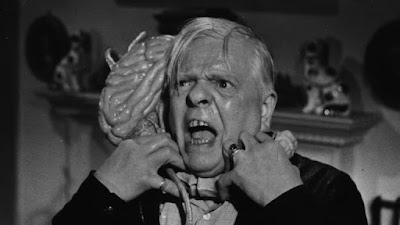 I have not read the source material for FIEND WITHOUT A FACE, but since it was a short story published in 1930, I tend to think that the film, strongly implicated in the politics of the Cold War, significantly transformed the original content. The story was even published one year prior to the first adaptation of FRANKENSTEIN to sound cinema, though of course Mary Shelley’s tale of scientific hubris became one of the cornerstones of science fiction in all media.

FIEND may have taken some cues from movie versions of the Shelley novel, since many such flicks include the trope of the mad scientist setting up shop in some bucolic area, which eventually leads to the villagers coming to root out the evil experiment with pitchforks and torches. FIEND changes things up, in that the “village” is a small farming town in the Canadian wilds, and there’s no mad scientist seen at first, just the sterling stalwarts of the United States Army. For some time, the army has maintained a radar installation in this remote area, alert for possible invasion. But the locals don’t like the way the base jets mess with their cows’ contentment, nor do they like the fact that the radar is powered by a nuclear plant. The natives routinely complain to army liaison Lieutenant Cummings (Marshall Thompson), who resolutely sloughs off any claims that the power that guards the free world against incursions might prove to be a double edged sword.

Only the viewers witness the slaying of a soldier by an invisible force, leaving the characters faced with a dire mystery: what could have removed both the soldier’s brain and spinal cord? “It’s as if some mental vampire was at work,” asserts the beleaguered Cummings. The only thing viewers know about the dead soldier is that he was apparently Canadian, since his only surviving relation is a local girl, Barbara. She doesn’t hold the death against the Americans, but when some locals perish in the same way, a fellow named Howard generates rumors about a “mad G.I.” Howard would like to be Barbara’s main squeeze, and another level of Canadian resentment toward the Americans, that of sexual competition, is suggested when Cummings starts pursuing Barbara.

As it happens, Barbara is also the key to Cummings finding the real culprit behind the killings, for she does secretarial work for a resident scholar, Professor Walgate—who is, in truth, the “mad scientist” of the narrative. Cummings’ research reveals that not only does Walgate write books about psychic phenomena, he’s also got a background in nuclear physics. Eventually Walgate reveals that during his travels in the East, he became fascinated with the idea of “thought materialization,” and so he seeks to create a literal “brain-child.” A flashback shows Walgate’s experiment—which gives rise not only to the one Fiend signaled in the title, but to a half dozen of the invisible predators—and there’s even a Frankensteinian thunder-storm on call, though the Fiends are actually empowered by Walgate somehow leeching off the army’s nuclear plant. Though nuclear power sustains the creatures, they instinctively devour the brains and spines of human beings. It turns out that their appetite mirrors their true nature, for at the justly famous climax, the Fiends lose their invisibility and stand revealed as serpentine creatures, each with a faux spinal cord for a body and a faux brain for a head.

The climax is so good that fans may forget the leisurely pace of the plot, or the fact that the male and female leads are ciphers. Their romance subplot is handled in a much more desultory manner than other “creature features” of the period, though it begins with some promise when Cummings visits Barbara’s house, nearly sees her in the altogether, and gets into a fight with the jealous Howard. (Howard later pays for being a heavy: one of the Fiends gets him but strangely doesn’t finish feeding, so that the unfortunate farmer ends up being a living but mindless zombie.) Walgate’s obsession isn’t given any deeper context than overreaching scientific curiosity, though there might be some symbolism in his name, since he’s the “gate” that allows a new species to cross over the “wall” separating thought from reality.

Still, the Fiends’ method of feeding is an ingenious transformation of vampiric visual tropes, making them a little bit Dracula as well as a little bit Frankenstein’s Monster. And even though the American army isn’t directly responsible for the Fiends’ creation, they share Walgate’s hubris since both scientists and soldiers gave rise to nuclear power. The thing that gives the Fiends life, nuclear power, is only possible because of the mental capacity of human beings, and so it’s appropriate that these “monsters of the Id” mirror the human organs most associated with thought and even spirituality, both of which are parodied into the image of ravenous serpents.

Posted by Gene Phillips at 11:07 AM
Email ThisBlogThis!Share to TwitterShare to FacebookShare to Pinterest
Labels: combative dramas, the marvelous