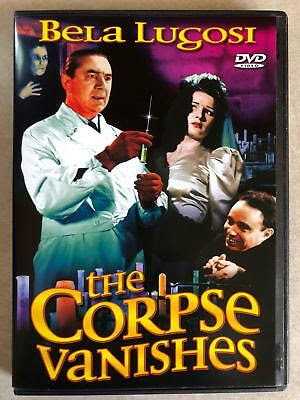 Though not as good as a previous Lugosi/Monogram entry, INVISIBLE GHOST, CORPSE is certainly better than the creaky DEVIL BAT.

The premise, while simply executed, has a little more symbolic resonance than many of its type. Doctor Lorenz (Lugosi) is a mad doctor from the continent whose wife, addressed as “Countess,” suffers from some unspecified disease that brings on pain and disfigurement. To stave off the disease, Lorenz uses a rare type of orchid to drug new brides at their own weddings, placing the women in suspended animation, so that they appear dead. Lorenz and his two assistants—midget Toby and dim-witted Angel—then kidnap the “bodies,” take them to Lorenz’s secluded country estate and drain vital fluids from their still-living forms. When Lorenz injects these fluids into his wife, she not only feels respite from the disease but appears to get younger and healthier as well. There’s a vague reference to hormones, but what’s really going on is a science fiction translation of the idea of a soul-vampire, with an older woman replenishing herself on the energies of virginal young women, just as a regular vampire throws off the chains of age by drinking blood, often that of young women.

Ambitious journalist Pat (Luana Walters) notices the presence of the orchids at the fatal weddings and gets on the trail of Lorenz. Her attempt to gain access to the doctor’s estate by following his assistants gets short-circuited, but she just happens to meet one Doctor Foster (Tristram Coffin), who’s on his way to collaborate with the foreign scientist on an experimental cure for Countess Lorenz. It’s a given that Foster doesn’t know about Lorenz’s plundering of bridal fluids, but Lorenz nevertheless acts the part of a good host and allows the reporter to reside at his house for the night, possibly because Foster might otherwise be alienated.

Pat turns out not to be that much of a hard-bitten journalist, since she witnesses a lot of weird goings-on at the estate and faints twice. Nevertheless, she leaves the manor with no incriminating evidence against the doctor. Pat sets a trap for Lorenz, but for unexplained reasons the mad scientist anticipates her ploy, captures her and almost subjects her to the same fate as the suspended brides. In the end, Lorenz and his collaborators all turn on one another and Pat survives to marry Foster and quit the arduous job of reporting.

Unlike many directors of Poverty Row flicks, Wallace Fox keeps up the tension during all of Lorenz’s depredations, often through using adroit closeups. Lugosi projects great intensity as the devoted husband who becomes a serial killer, yet who also metes out stern justice to the lustful Angel when he gets out of line with a suspended bride. (The actor playing Angel has a very slight bodily resemblance to Boris Karloff; maybe that’s why Lugosi looks so enthusiastic strangling the dimwit.) All of the supporting actors acquit themselves ably and the humorous touches aren’t as overplayed as one sees in a lot of B-films.