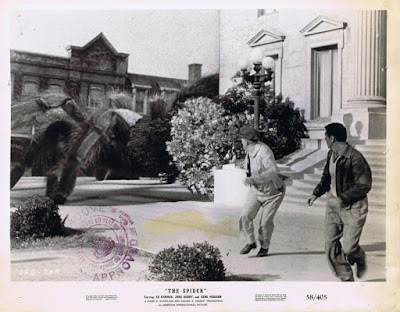 Bert I. Gordon’s SPIDER shared the same September 1958 release-date as Irwin Yeaworth’s THE BLOB. There’s no similarity between the monsters, but both plots revolve around their being discovered by various “clean teens” who encounter a lot of problems trying to relay the news to skeptical adults. Possibly both were emulating a previous fright-flick model that preceded both, but if there were none, I would tend to believe Gordon or one of his writers found out something about the BLOB script and worked in the “nobody believes the goofy teens” angle. In any case, THE BLOB makes the adult skepticism more important to the overall story, while in SPIDER the same element is of marginal importance.

Far more important to the story is that the two clean teens who discover the Spider are looking for a lost adult, a pretty clear reverse on the usual parent-teen dynamic. The film opens as Jack Flynn, father of teenaged daughter Carol, drives along a country road with a bracelet he’s bought her for her birthday. Flynn’s car is stopped by some unseen entity, and the older man screams into the camera—after which the story moves to Carol in the neighboring town the next day. She tells boyfriend Mike that she’s worried about her absent parent. He seems to think the father's absence is no big deal, though the script doesn’t ever say why he thinks so. (There’s a brief mention of Jack having had some “cronies,” so the implication may’ve been that the missing father liked to go out and hoist a few.) Nevertheless, Carol gets her way, and the two teens try to retrace Jack’s steps. They find Flynn’s wrecked truck, but not Flynn, as well as a mysterious sticky rope laid across the road (implicitly a web-line from the thing that accosted Daddy Jack).

The two teens eat up a lot of time exploring a nearby cave, one posted as off-limits, apparently because individuals have got lost there. (Whether or not the Spider has been preying on people we don’t know, since the viewer doesn’t know how long it’s been there, or what forces made the arachnid oversized.) Mike and Carol first encounter a big web (looking like a trapezist’s net) and then the Spider. They escape and try to warn the authorities. Logically, even when the local law goes looking for the missing man, they shouldn’t have credence the spider-story at all. But apparently the scripters wanted to move things along, so a local science-teacher insists that they take along a supply of DDT in case the teens are telling the truth. This comes in handy when the Spider attacks, for the DDT apparently kills the eight-legged freak. (Oh, and the cops also find the dead body of Carol’s dad, putting an end to his gamboling.)

Triumphant, but not very curious about the provenance of the monster, the authorities take the body of the Spider into town. I didn’t follow why they decided to put the supposedly dead monster in the local high school, except that it sets up the creature’s revival. A local amateur band starts playing rock for the students in the same room, and bingo, the web-spinner spins his way back to life and starts stalking new prey all over town.

The siege of the Spider and the retaliations of the small-town citizens are modestly entertaining thanks to the imposing nature of Gordon’s rear-projected arachnid, who looks pretty good after Gordon’s lousy handling of the giant grasshoppers in BEGINNING OF THE END. Eventually the Spider heads back to his old digs, but Carol has dragged Mike back to the caves to look for her lost bracelet, which provides more suspense than the constabulary’s attempts to stamp out their nemesis. Ultimately the score boils down to: Clean Teens (aka ‘Earth”) One, Spider zero.

While I don't suppose most of Gordon's films prove rife with comedy relief, SPIDER has little to speak of compared to other fifties SF films, and the funniest moment appears as the result of a goof. In an early scene, Mike and Carol approach the cave. Mike sees something Carol doesn't: her father's torn-up hat. Mike hides the ripped apparel behind his back so Carol won't see. He then tells her to wait while he goes inside alone, and when she looks away, he tosses the hat to one side-- but not into the nearby bush. It looks as if he tosses it out in the open, just where Carol would see it if she looked around. Of course both actor and director know she's not staying inside, that she's going to follow Mike into the cave-- but Mike's character is not supposed to know it.

Posted by Gene Phillips at 12:29 PM
Email ThisBlogThis!Share to TwitterShare to FacebookShare to Pinterest
Labels: the marvelous