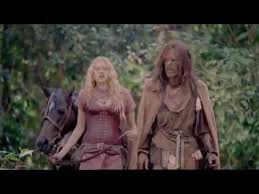 This telefilm certainly can’t be accused of imitating any film-adaptation of the venerable literary folktale, since hardly any of the familiar “Beauty and the Beast” tropes even appear in it. There is a young woman who falls in love with a man despite his beastly appearance, and there is a conclusion in which the Beast’s curse is allayed and he regains his normal human appearance. But the bulk of the film owes more to fairy stories like “Snow White” and “Sleeping Beauty,” but told from the perspective of a prince denied his inheritance.

While the villain of the original story is a nugatory figure, here two nasty schemers get the action going. The ailing old king of a fairy-tale kingdom is about to die without a clear heir, and one schemer, Count Rudolph, plans to gain the throne by any means necessary. He even considers making a marriage-contract with a witch named Helen, who addresses him as “cousin” though no familial relationship is ever explained. Rudolph sees a new way to popularize himself when a local beauty named Belle (Estelle Warren) testifies to meeting a forest-wanderer with a beast’s face (Victor Parascos). Because reports of a mysterious beast-man have long haunted the kingdom, Rudolph thinks he can gain fame by killing the creature.

However, Helen reveals that the Beast is more threat than opportunity. Long ago Helen herself was the lover of the old king, but he kicked her to the curb due to her cruelty and sorcery. Like every good evil stepmother of traditional tales, Helen reacts by cursing the king’s child by another mother, so that from childhood the potential prince possesses an animalistic visage. The old king gives the order to have the unsightly child killed, but a beneficent groom spares the boy and raises him in the forest.

Helen and Rudolph decide to frame the inoffensive Beast by sending a troll to kill the Beauty. Belle doesn’t happen to be home, though, and the monster slays her mother. Rudolph’s men capture the Beast and plan to put him on trial and execute him. However, the old groom is still around to convince Belle of the Beast’s innocence. After she helps free the Beast from prison, the two of them team up to hunt down the witch and to expose Rudolph—which also eventually leads to the Beast’s rebirth as a handsome prince.

There are no enchanting beauties in this BEAST, but it is a fast-moving adventure with a lot of plot-threads and a smattering of low-budget gore. The Beast’s face is mediocre even compared with the average film-adaptation of the story, but Nacardo, despite being deprived of facial expression, puts across a fair amount of melodramatic emotion through his voice alone. Warren’s Belle often seems too contemporary in tone, not to mention being dressed in clothes too skimpy for the period, but she’s both comely and spunky. “Intrigue over the throne” shoves out almost all potential for the expected romance of the principals, which the script must shoehorn in where possible. Helen isn’t a great example of the bad stepmother-type, but as played by Vanessa Gray she’s certainly witty and resourceful, even if the script does have her call on such “evil” forces as Ahura Mazda (a beneficent Persian deity). The writer works in at least five references to beheadings, even where they’re not strictly necessary. One might wonder if all the head-chopping references herald a Freudian interpretation, where the “evil mother” takes out her rage against her former lover by giving the king’s son a face that no woman ought to love, thus effectively “castrating” him. But though the writer does work in two separate bits of dialogue about Helen having made the Beast into the man he is, Helen’s still a flat stereotype, and the couple’s triumph over the bad mother and the Bad Brother Rudolph is no more competent melodrama. It’s a decent time-killer, no more.

Posted by Gene Phillips at 1:59 PM
Email ThisBlogThis!Share to TwitterShare to FacebookShare to Pinterest
Labels: combative adventures, the marvelous