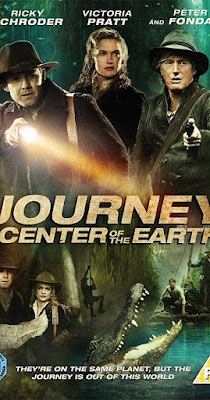 This telefilm is something of a “repeat journey,” not in being yet another adaptation of the Jules Verne classic; rather, it's a shaved-down remake of a 1999 two-part television movie scripted by Thomas Baum. I remember the two-parter as bloated and unwieldly, so if nothing else, this version has been trimmed down to essentials. Its main resemblance to the Verne work is that the narrative takes place in the same period as the novel, the 1870s, even though the locale is altered from Iceland to Alaska.

Where Verne had his explorers delving into the earth’s core for purely scientific motivations, this JOURNEY invokes romantic reconciliation as the main purpose. Young maybe-widow Martha (Victoria Pratt) hires roving anthropologist Jonathan Brock (Rick Shroeder) and Brock’s nephew to find her husband Edward (Peter Fonda). Some time back Edward—who, the dialogue relates, is significantly older than Martha—went to Alaska looking for a entrance to a subterranean cavern. Though Martha is a woman of her time, she insists on going along on the quest—and it would be a slow viewer who didn’t expect that on the way the appropriately named “Jonathan and Martha” might take a shine to one another.

Long story short, the threesome—who become a foursome when they pick up a Russian aide (replacing the Swedish assistant of the novel—descend the cavern until they find a perfectly preserved prehistoric world. The script does capture a little of the novel’s “sense of wonder” about the nature of Earth’s innards, but verisimilitude is tossed aside when the explorers encounter not just a few leftover dinos, but also a whole tribe of primitives, made up to look like American Indians. By the time the primitives show up, the experienced viewer will not be surprised to learn that Edward has used weapons from the surface world—guns, sticks of dynamite—to make himself a god. However, uneasy lies the head that wears the crown, and the appearance of new faces from the outer world creates more trouble for everyone.

Director T.J. Scott (husband of Victoria Pratt) sets up many engaging location-shots, but he can’t do much with the pedestrian script. Only Pratt’s Martha gets a halfway interesting emotional arc, especially when she finds that the older man she married—more out of admiration than love, and to get away from an overprotective father—has been shacked up for four years with a native babe. The script initially seems interested in making Shroeder’s Brock into an Indiana Jones adventure-type—he’s first seen bare-knuckle boxing an opponent for profit—Brock doesn’t really do anything daring in later scenes, and Shroeder shows little romantic chemistry with Pratt. Peter Fonda probably gets the best lines, but again, nothing much he could do with such a routine character. Had the same characters been plopped down into a mundane African jungle, I would probably consider Brock and Martha to be the focal presences. And while it’s not impossible to adapt Verne’s JOURNEY in a way that places all the emphasis on the explorers—a case in point being this 1993 TV-movie—this 2008 flick, like Verne, makes the setting the star.

Posted by Gene Phillips at 11:15 AM
Email ThisBlogThis!Share to TwitterShare to FacebookShare to Pinterest
Labels: subcombative adventures, the marvelous