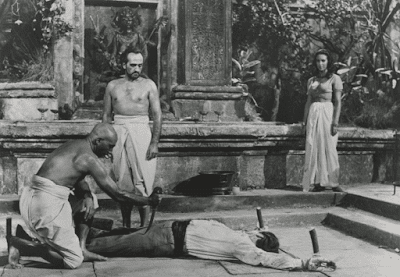 Prior to this Hammer film, most American filmgoers knew about the Indian thuggee cult only from the 1939 quasi-Kipling adventure GUNGA DIN. In my review I noted that the thuggee in that film didn’t seem like much more than standard boogiemen; tenpins set up to be knocked down by the valorous British soldiers.

STRANGLERS OF BOMBAY, directed by Terence Fisher and scripted by David Z. Gordon, is loosely based on stories of the British Raj’s extermination of the thuggee cult in the 1800s. Aside from the aforementioned GUNGA DIN movie, the terrors of the thuggee had been intermittently exploited for chills and thrills in pulp magazines, usually with little or no reference to Indian history. But Fisher’s movie has the structure of a historical drama, even though there’s no actual attempt to retell any part of the actual story of thuggee extermination.

Though the film is centered in Bombay, Gordon’s script makes clear that the power of the thuggee has existed for centuries and extends over many quarters of India under the British Raj. The cult-members rob traveling caravans passing from city to city, and they slaughter all of the travelers in the name of their bloody goddess Kali. Despite the thugs’ many depredations, the ignorant English officers in Bombay attribute all the raids to common bandits. The officers show no inclination to root out the murderous gangs, and only make token efforts because of the complaints of English traders who want their caravans protected. Only one Englishman, Captain Lewis (Guy Rolfe), listens to the stories about the thuggee and tries to take measures to end their menace.

Lewis is not a deep character. He has a cute wife at home who urges him not to buck the system, but Lewis can’t help it. He feels a sense of responsibility to the Indian people, though one never knows exactly how he feels about any particular Indian, with the exception of a young native boy who’s more or less a stand-in for India as a whole. Eventually Lewis kicks against his superiors and resigns, though this doesn’t stop him from continuing his one-man anti-thug campaign.

Yet Lewis is not the star of the show, as were the soldiers of GUNGA DIN. Though none of the thugs stand out as characters—a local high priest, a couple of collaborators who spy for the thugs in the cities—Gordon does a good job of making the cult seem both ruthless and awe-inspiring. There’s some doubt among historians as to how religious the real thugs were. Nevertheless, Gordon faultlessly evokes the sense of the stranglers’ fanaticism-- some members are executed if they steal for their own betterment, not Kali’s—and the script even references an Indian myth about Kali to account for the thugs’ penchant for strangulation. STRANGLERS OF BOMBAY represents one of the few times that a cult of villains takes center stage, as opposed to a single villain, such as Fu Manchu, who commands the cult.

Wikipedia calls the later Hammer film TERROR OF THE TONGS a “quasi-remake.” There are no significant likenesses between STRANGLERS and TONGS, particularly since the hero of the later film is out to avenge a relative, not to save a country full of people. In addition, TONGS is out-and-out pulp adventure, and sports some strong combative scenes, while STRANGLERS becomes rather slow going whenever the thugs are not on screen. So TONGS would only qualify as a “subject matter-remake” if at all—and that presumes that some Hammer producer said something like, “That thuggee picture made us a lot of money; let’s do a film about some other Asian cult now.”

Posted by Gene Phillips at 12:50 PM
Email ThisBlogThis!Share to TwitterShare to FacebookShare to Pinterest
Labels: the uncanny, weird families and societies (u)