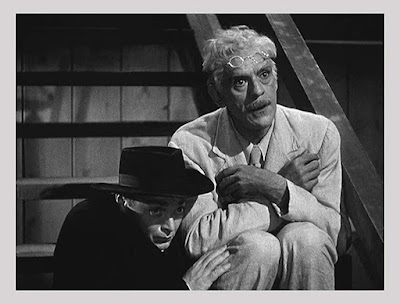 The meaningless title fits well with the screenplay, a hokey attempt at a horror-comedy loosely patterned after the example of the stage-success ARSENIC AND OLD LACE.

Headliners Boris Karloff and Peter Lorre, both of whom had participated in renditions of the ARSENIC franchise, probably welcomed BOOGIE MAN as a humorous diversion from the creepy roles that had made them Hollywood commodities. However, the comedy here is thin and predictable. Whereas ARSENIC came up with a strong comical proposition and developed it well, BOOGIE MAN just riffs on the central idea of the play and throws in a lot of nonsensical elements on top of it.

Professor Billings (Karloff) is a wacky old inventor who’s in debt. To allay having his house repossessed, he sells it to wacky girl Winnie (Jeff Donnell), who wants to remodel the place into a country inn. Winnie is pursued by her ex-husband Bill (Larry Parks), who despite the divorce is still in love with his ex, and who reluctantly helps her in order to keep her foolish investment from being wasted. (Bill fills the role of the “straight man” character from ARSENIC.) Neither Winnie, Bill, nor the aged housekeepers know that Billings is performing experiments in his basement. Said experiments are designed to change the professor’s captives—mostly traveling salesman, standing in for the “lonely men” of the play—into supermen who can win the war for America. However, the shady local sheriff Lorentz (Lorre) finds out about Billings’ project and seeks to find some way to make money off it.

The script tosses in some more goofy support-characters (a salesman of powder puffs, a bomb-tossing fascist), but none of them add up to anything. The key swipe from ARSENIC is the appearance that Billings has killed a bunch of people to expedite his research, but the script weasels out of laying even comical crime at Billings’ door, since all he does is place the victims in suspended animation, from which they recover. (This is, incidentally, the only metaphenomenon in the movie.) It’s possible that the comedy might have been more memorable had Billings succeeded in making some bollixed-up version of a superman, since such a development could have spoofed the very idea of winning the war with amped-up soldiers. But BOOGIE MAN stays close to its model in terms of plot while failing to come up with any memorable jokes.

Karloff and Lorre’s roles—blundering, unworldly scientist and larcenous schemer-- aren’t that different from previous types they’d played before, sans overt comedy, so neither man really stretched all that much. Both would go on to do much better comic roles when given stronger material, so at best BOOGIE MAN is an anticipation of things to come, such as THE RAVEN. Perhaps because the headliners weren’t doing anything new, I got the most entertainment out of the relationship of daffy Winnie and her sane but harried husband Bill. They don’t mention getting re-married by the end of the movie, but it’s probably just one of many plot-points that gets lost in the manic wrap-up.

Posted by Gene Phillips at 3:58 PM
Email ThisBlogThis!Share to TwitterShare to FacebookShare to Pinterest
Labels: the marvelous