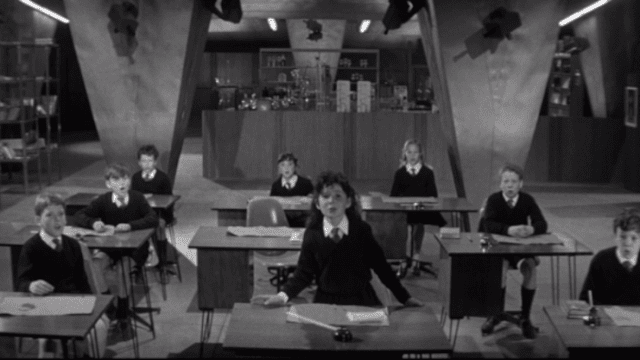 No one in this Joseph Losey film makes any references to anyone’s damnation, so it’s likely that the title was just Hammer Studios’ call-out to their earlier SF-horror VILLAGE OF THE DAMNED. There are weird kids in both films, but THESE was adapted, ostensibly in a faithful fashion, from a H.L. Lawrence novel (published in 1960, the same year VILLAGE came to British screens). The kids of VILLAGE were the offspring of unseen aliens, manipulating the kids for a proxy invasion of Earth, but Losey’s freaky kids are spawned by good old-fashioned nuclear radiation.

Simon Wells (Macdonald Carey), middle-aged American tourist, goes trekking in southern coastal England, specifically in a city named Weymouth, which includes its own British military base. At a bar in town Simon picks up a younger woman, name of Joan (Shirley Anne Field), but as they walk out together a gang of tough young men ambush Simon and rob him. Though it’s apparent to Simon that Joan was a stalking-horse for the thieves, she meets him the next day to apologize, and goes sailing with him on his boat. This development does not set well with gang-leader King (Oliver Reed), who is Joan’s brother, at once willing to use her appearance as bait and fiercely jealous of any other man’s attentions to her.

Simon and Joan rendezvous on shore for sex, but King’s gang finds out their location. The two fugitives escape to the vicinity of the aforementioned military base and hide in a series of nearby underground caves. In the caves Simon, Joan and King come across nine strange children—five boys and four girls—who are dressed in school uniforms and who have been raised in the seclusion of the caves as far back as they can remember. The first time Joan touches one of the kids, she finds his skin cold as ice, and the other children are the same. The three adults then butt heads with the man in charge of the underground project, Bernard (Alexander Knox), and soon learn that all nine kids are radioactive, as the result of their parents having been exposed to radiation. Bernard, who has what might be termed a father-god complex, intends to keep the children sequestered from society not just for public safety—and in truth, the kids would never be able to mix with other human beings—but because Bernard thinks that nuclear holocaust is inevitable. When all other humans perish of radiation poisoning, the nine radioactive children will be able to carry on some semblance of civilization.

THESE plays on nuclear fears to offer viewers a “Hobson’s Choice,” a dismal choice between a rotten offer and no offer at all. Thanks to the sharp, uncompromising black-and-white photography of Arthur Grant, viewers are likely to agree with Bernard, even while feeling pity for the sinless orphans, destined to be pawns in a nuclear game that no one can win. Losey reportedly had the original film-script rewritten to his tastes, so clearly the theme of eternally frustrated desires accorded with his intentions. THESE is successful in its limited scheme, but Bernard’s Machiavellian character never catches fire. King, the second most interesting character, ends up joining Joan and Simon in their futile attempts to help the kids, but Losey’s script never gets any dramatic heft out of his virgin-and-whore conception of his sister, except to have Joan rather limply castigate him for it. THESE ARE THE DAMNED is an appealing if one-note curio of the time, but since we didn’t yet have a nuclear holocaust, the film’s potential for satire proves far inferior to a comparable work like Kubrick’s DOCTOR STRANGELOVE.

Posted by Gene Phillips at 12:31 PM
Email ThisBlogThis!Share to TwitterShare to FacebookShare to Pinterest
Labels: the marvelous