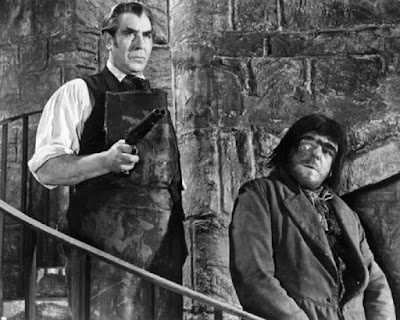 The title here is a dodge: the “monster” of the tale is a mad scientist, who toward the end of the picture tells the audience that he was once called “the Vampire” because of his devotion to experimental (and illicit) blood research. The movie ever starts with a title-card detailing the legends of vampires, the better to further hoax the film-viewers.

About twenty minutes in, though, the astute viewer would have began doubting the veracity of the film’s producers. The virtuous young protagonist of the story, Doctor John Pierre (Vincent Ball), doesn’t venture into a bloodsucker’s castle; he gets sentenced to a prison of the late 1800s because he failed to save a patient’s life with a crude form of blood transfusion. Good intentions count for nothing, and Pierre is condemned to an insane asylum—although, thanks to some behind-the-scenes chicanery, he ends up being transferred to an isolated prison. There, Pierre swiftly finds that both his life, and the lives of his fellow prisoners, are cheap in the eyes of the guards, and of the prison warden Doctor Callistratus (Donald Wolfit).

While in the regular world Pierre’s fiancée Madeleine (Barbara Shelley) labors to get his case reviewed, Callistratus informs the young doctor that he will now be assist with the scientist’s arcane blood-experiments, usually carried out upon unwilling prisoners. Pierre, though appreciative of his comfy new position, nevertheless repudiates the ruthless experiments, even before finding out Callistratus’s special motivation: that he himself suffers from a malady brought about by one of his experiments.

Until the picture’s end there’s not a lot of “mad science” in the film, which often seems more like a “Count of Monte Cristo” type of story. Jimmy Sangster’s script tosses in some interesting complications. Madeleine gains access to the prison by pretending to be a housekeeper, the better to learn Pierre’s status. Callistratus’s deformed assistant Carl (Victor Maddern) immediately takes a Renfield-like devotion to the beautiful Madeleine, which of course results in his coming to her defense and turning against his master. But most of the film’s middle section feels like Sangster padding things out.

Up until the conclusion, most of the science consists of things that would later become commonplace—blood transfusion, and even an early cryogenics attempt (though one wonders how a doctor in the 1800s could freeze a man in a solid block of ice). Only when the evildoers gives Pierre his full history—asserting that he Callistratus introduced a “culture” into his own body that brought the doctor back from death—does the script venture into the realm of the marvelous.

Ball and Shelley are fine, with Shelley’s work here anticipating her better-known Hammer films to come. It seems likely that the studio, Tempean, was seeking to craft stage-actor Wolfit into their version of Peter Cushing. Wolfit is adequate, but he never quite manages to inhabit his madman-character, and he just doesn’t have Cushing’s sense of presence—both of which may account for his lack of film-star status down the road. BLOOD is an okay time-killer, often suggesting gross violence rather than showing it, but it’s not even on the same level with the middle-level Hammer flicks of the period.

Posted by Gene Phillips at 4:09 PM
Email ThisBlogThis!Share to TwitterShare to FacebookShare to Pinterest
Labels: the marvelous