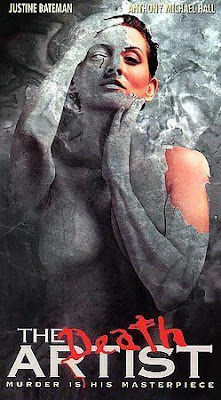 DEATH ARTIST is largely a beat-by-beat remake of Roger Corman’s 1959 A BUCKET OF BLOOD, with the Charles Griffith script rewritten for the nineties, partly by the film’s director Michael James McDonald. Both movies start off in a coffee-house that caters to patrons with delusions of artistic grandeur: beatniks in 1959, hipsters in 1995. In both films nebbish bus-boy Walter Paisley (Dick Miller first, then Anthony Michael Hall) gets caught up in the desire to win approval by churning out an artistic masterpiece on demand, and he finds a quick way to fame by encasing dead bodies in plaster and passing them off as authentic sculptures.

The most creative aspects of the new script are the open-mike performances of various hipster-poseurs at the coffee house; without making direct reference to the lines used in the original film, I’d say the pseudo-art of the nineties hipsters sounds more gleefully absurd. A particular standout is head hipster Maxwell (Shaddoe Stevens), whose ramblings inspire Walter to make his “deadly art.” Anthony Michael Hall’s Walter, with his twitchy insecurities, carried more conviction with me than did Dick Miller’s more labored effort. Justine “Family Ties” Bateman gives her all to the role of the young female artiste Walter pursues, but though this version of the character sports an Italian accent, she proves the weakest link in this iteration.

Posted by Gene Phillips at 12:43 PM
Email ThisBlogThis!Share to TwitterShare to FacebookShare to Pinterest
Labels: bizarre crimes and crimefighting (u), perilous psychos (u), the uncanny