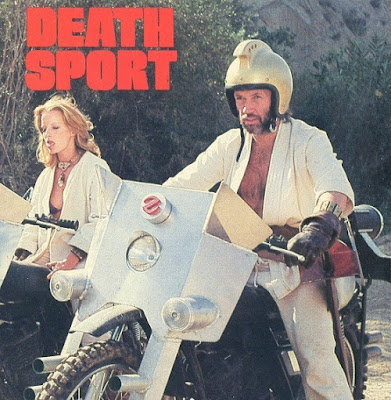 Following the 1960s almost everything that proceeded from the various production companies of Roger Corman consisted of unapologetic knockoffs of better-made films, usually with loads of gratuitous sex and violence added in. One exception was 1975’s DEATH RACE 2000, which was reasonably clever despite having been designed to take advantage of an A-level movie that same year, ROLLERBALL. But when Corman decided to make a knockoff of his own knockoff, the results were far more predictable, particularly since Corman made the later film for less than half of DEATH RACE’s estimated cost.

Throughout the fifties and sixties Corman gave directing jobs to students just out of film school, almost certainly because he could get their services for rock-bottom prices. In the case of DEATHSPORT the directorial chair went to Nicholas Niciphor, who had no experience with something as demanding as a future-apocalypse action-movie. David Carradine, who had starred in DEATH RACE and was finishing up the KUNG FU series, was hired to play the lead role in DEATHSPORT, and this may have been the only reason that the film made back twice its budget at the box office.

Whereas in DEATH RACE the idea of “playing sports for keeps” was central to the extravagant storyline, the script in DEATHSPORT barely justified the “sport” part of the title. The narrative owes much more to classic western scenarios. Carradine plays Kaz Oshay, one of a group of “range scouts” who attempt to keep law and order in the post-apocalyptic wasteland. One of the menaces to the fragile communities of the wastes are a group of motorcycle-riding raiders led by bandit king Ankar Moor (Richard Lynch), who is also the slayer of Kaz Oshay’s mother. The villains want to make an example of Kaz Oshay and a female guide (Claudia Jennings) by killing them in a big dirt-bike race, the “deathsport” of the title. But the film has none of the structure of DEATH RACE; it’s just a lot of pointless fights and motorcycle races. (At least the bike-stunts, possibly photographed by Gary Graver, look good.) Kaz Oshay spouts some mystical aphorisms that were probably meant to evoke Kwai Chang Caine, but Carradine’s performance is stilted and tedious. Lynch, playing a by-the-numbers bad guy, brings far more conviction to the unpromising role.

There are some disintegrator rays and cannibal mutants thrown into the mix, but next to this mess, Patrick Swayze’s dull but earnest STEEL DAWN starts to look pretty good.

Posted by Gene Phillips at 12:37 PM
Email ThisBlogThis!Share to TwitterShare to FacebookShare to Pinterest
Labels: combative adventures, the marvelous