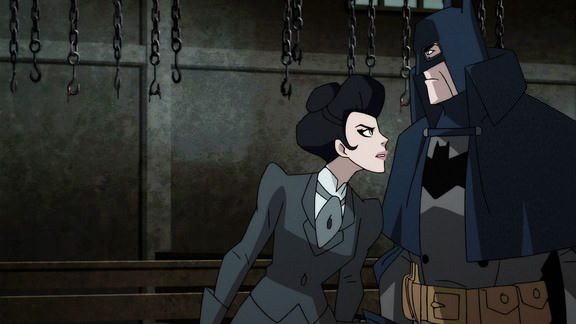 Not only is this DTV Bat-video one of the few DC animated releases that I’ve rated with a “good” mythicity, it’s also the first one that excels its source material.

The original GOTHAM BY GASLIGHT is a routine exercise in the “Elseworlds” concept, which involves a franchise character being re-imagined as if he’d been born in some radically different cosmos. Here the concept is that Bruce Wayne becomes “the Bat-Man” not in the 20th century but in Victorian times, when Gotham City is still in its early stages of growth. “Victorian Bruce” goes to the continent to study crimefighting and psychology, and then returns to America to take up his new avocation. But a notorious serial killer takes his victim-hunting to Gotham at the same time as Wayne’s return, a coincidence which results in the millionaire being suspected of being none other than Jack the Ripper. The graphic novel’s art by Mike Mignola is pretty but holds no surprises, except for a witty moment when Wayne converses with his mentor Sigmund Freud, and the artist pays heavy attention to the cigar in the psycho-analyst’s clutches. Far weaker is Brian Augustyn’s script. Thoth knows, no one seeks out any Batman comics for ingenious detective puzzles. But Augustyn doesn’t even try to camouflage the Ripper’s real ID, since the author provides readers with only one viable suspect. The main appeal of an Elseworlds adventure is seeking how the story dresses up aspects of the franchise character’s mythos in new clothes, but Augustyn blows this too, cobbling together just a few unmemorable tweaks on the Bat-mythos.

In contrast, writer Jim Kreig, working under the directorial helm of Sam Liu, barely uses anything of Augustyn’s script beyond the basic setup and Bruce Wayne’s accusation of being the Ripper. For one thing, Kreig's Gotham uses a few more "steampunk" SF-elements than does the original tale. For another, while the graphic novel contents itself with showing a few perfunctory killings by the notorious madman, Kreig transfers the trope of “Victorians obsessed with sex but guilty about it” to Gotham City with great inventiveness. The Ripper’s musings on the lasciviousness of whores—by which he really means all women—are much more thorough and indicative of his psychosis, and this time, there’s at least three characters who could be the murderer’s “secret identity.” (For what it’s worth, I didn’t see the big reveal coming.)

Kreig works in over a dozen revised versions of famous Bat-characters in his opus (and even a version of the Bat-signal). While many of these are just throwaways, some have thematic depth. Early in the story the Bat-Man encounters three street-kids known as the “Cock Robins,” all of whom share the names of famous Bat-partners, and the kids are used to remind the reader of class inequities. Selina Kyle appears, using her whip though not her cat-costume, but her 19th-century version is not just an adventurer, but a suffragette who seeks to call attention to male culture’s marginalization of women. This part of the script, which might have become preachy, enlivens the character interactions between Kyle and Wayne, who are inevitably drawn to one another even without the criminal/crimefighter dynamic—so drawn that one scene justifies the video’s “R” rating. Most telling is a scene suggesting that even women can be seduced by the rampant guilt-tripping, when the Ripper’s female lover makes the suggestive remark that “it’s the women’s sins that are the worst, because they’re hidden inside.”

On top of all that, the action-scenes are much more compelling than anything in the fusty graphic novel. All in all, a stellar achievement for the DC animated universe.

Posted by Gene Phillips at 12:46 PM
Email ThisBlogThis!Share to TwitterShare to FacebookShare to Pinterest
Labels: combative adventures, the marvelous