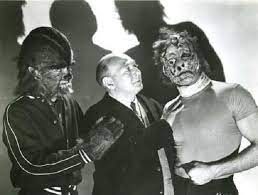 The last film in producer Herman Cohen’s “teen monster tetralogy” is the oddest of the four, and the one least like a standard low-budget exploitation film. It may well be the first time a Hollywood film was used to deliver a valentine’s card to the entire genre of horror movies.

I know that even among fans it’s common to assume that during the era of Classic Hollywood, the raconteurs who made horror films were not particularly engaged with the genre; that it was all Just a Job. And ninety-nine times out of a hundred, this is probably true. However, HOW TO MAKE A MONSTER is the first time I ever saw a mainstream horror-film talk about using fright-films as “therapy” for the masses. I won’t say that Cohen and his co-writer Aben Kandel were trying to “make a statement” precisely—although Cohen did continue to work almost exclusively in the horror-genre for the remainder of his career. But I think that their story of a crazed Hollywood makeup man was one in which they drew upon some real moviemaking history—more on which later.

TEENAGE WEREWOLF and TEENAGE FRANKENSTEIN were both traditional monster-films about teens turned into horrors by malevolent older men. MONSTER, however, presents the viewers with a world where both creatures were just movie-fiends created by the makeup wizardry of makeup-wizard Paul Dumond (Robert H. Harris). Dumond, together with his assistant Rivero (Paul Brinegar), has spent years in the business of making monsters for AIP Studios (or rather, a very fictionalized version thereof). When the movie starts, Dumond has just begun work on a film that brings together both the Teenage Werewolf and the Teenage Frankenstein for a battle royale. But a new regime, represented by two Eastern businessmen looking for quick profit, decides that horror films are on the way out. As is often the case with regime change, a lot of people on the AIP lot get pink-slipped, including Dumond and Rivero, who are expected to leave after finishing their current project.

Dumond is fanatically devoted to his craft, and does not go gently into that good night. He argues with the new bosses’ decision, making the claim that horror films have therapeutic uses, but to no avail: the businessmen have decided that the public wants only light entertainment. Yet plainly Dumond is not really devoted to psychological therapeutics, any more than the mad scientist of TEENAGE FRANKENSTEIN really cares about scientific progress. Late in the film Dumond calls his makeup-creations his “children,” and the fact that he has no family to speak of indicates that he’s thrown all of his passion into his art. In this he strongly resembles the mad wax-sculptors of both MYSTERY IN THE WAX MUSEUM and its very successful 1953 remake HOUSE OF WAX, since they too deemed their sculptures to be their “family.” But unlike the wax-men, Dumond also has something of a god-complex. In his earliest speech, as he chats with one of the teens he’s made up as a nightmare, Dumond talks about God having created both mild and fearful forms of life. It can hardly be doubted that he’s praising his own creation-skills, though if he ever created anything but fright-figures, the script remains mum on the subject.

The God of Monster Makeup can’t keep the regime from changing, but he can visit divine vengeance upon the impious studio managers, and upon the studio, whose financial success he attributes to his own genius. Dumond tells Rivero that he just happens to have invented a foundation cream initially designed to relax the actors being made up, a cream with hypnotic properties. The calmly mad makeup man uses hypnosis on the two actors playing his monsters, causing them to go forth and slay the callous Eastern businessmen—and since the artist can’t resist signing his work, he sends the actors out dressed in full fiend-regalia. The Werewolf has no witnesses when he murders his target, but the Frankenstein is seen after his crime. Nevertheless, the investigating police, though they interrogate a lot of studio personnel, aren’t seen interviewing either of the monster-thespians.

Very little time is devoted to the teenaged actors or their alter egos; they both just get one kill apiece, and neither assumes a monstrous form for the big climax. As if to underscore the fact that Dumond is the real star, he also dons monster-makeup to kill off a nosy studio guard who stupidly hints of his suspicions about Dumond and Rivero. One scene includes an acerbic agent who gets in Dumond’s face for having interfered with the actor whom the agent represents. But the character never appears again, and it may be that the scene was added both to pad the film and create false anticipation for another murder. In the hurried climax, Dumond lures his two pawns to his home, apparently planning to cut their heads off and mount them for his makeup-collection. The actors, who have dimly begun to suspect that something’s off, manage to escape after Dumond murders his assistant and perishes in a fiery blaze.

Dumond is too much the catchpenny fiend to be as compelling as the aforementioned wax-sculptors. However, the setup provided by Cohen and Kandel seems to be a direct commentary on the fall and rise of horror films in Classic Hollywood. Putting aside the mixed bag of the silent era, America’s cinematic horror essentially began in 1931 with the first successful Universal adaptations of DRACULA and FRANKENSTEIN, while the company was under the aegis of the Laemmle family. A regime change in 1936 ousted the Laemmles, and while horror films were still made for the next eight years, after that the genre was almost extinct at Universal until roughly 1950. Particularly during the reign of studio boss Joe Pasternak, horror was essentially passed over in favor of the same sort of “light entertainment” favored by the fictional studio bosses of HOW TO MAKE A MONSTER. On a minor note, old-fashioned studio makeup artists like Jack Pierce received short shrift as well, though in real life Pierce found a number of other work-venues that the mad Dumond would have scorned.

Now, when I say that MONSTER was a “valentine” to the horror genre, I don’t want to overstate the sentimentality factor. For me the most logical scenario is that Cohen and Kandel were aware of all the chaos that had arisen at Universal during that regime change, and that they decided that they could use that chaos as a template for an entertaining “behind the scenes” story of the moviemaking business, crossed with their established motif of evil older citizens manipulating victimized teenagers. (The motif makes a minor appearance in Cohen’s 1963 KONGA as well, though not with quite the same pattern.) As an added fillip, since 1950s audiences could look around and see that horror and its near relations had indeed made a comeback, Cohen and Kandel could play games with the anti-horror stance of the 1940s producers, as if to say, “see how dumb you were to cross horror off your list, you weenies!”

I don’t entirely buy the gay interpretation of the “teen monster tetralogy” seen in some analyses. All of the malefactors in the four films seem utterly uninterested in sexual satisfaction, in comparison with obtaining validation for their enormous egos. Yet it must be admitted that manipulations of all sexual persuasions were also going on “behind the scenes” in Hollywood, so nothing’s completely outside the realm of possibility.

Posted by Gene Phillips at 1:56 PM
Email ThisBlogThis!Share to TwitterShare to FacebookShare to Pinterest
Labels: the marvelous