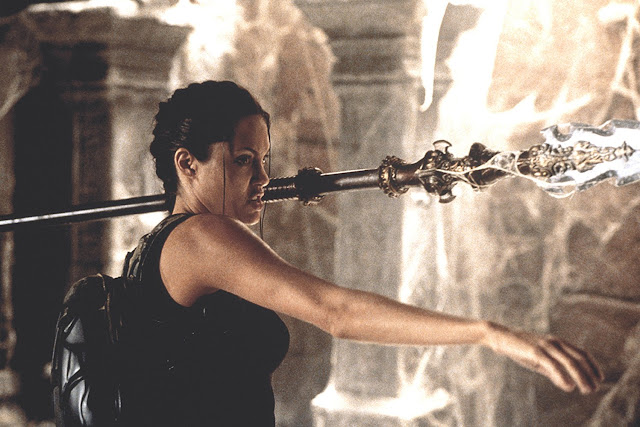 To justify their existence, movies adapted from video games need to fulfill one requirement: lots of spectacular action-sequences with a minimum of character motivation. Whereas a few creators have been able to slightly upgrade characterization in movies based on the somewhat related form of chapterplay serials—RAIDERS OF THE LOST ARK being the obvious go-to here—in video game movies, this would seem like gilding the lily.

In the first Lara Croft movie, the titular daredevil archeologist (Angelina Jolie) has just one strong motive for her derring-do: to obey an injunction left behind by her missing-and-presumed-dead archeologist father (Jon Voigt, Jolie’s real-life paternal unit). A note from dead daddy informs the adventurous English heiress that she must seek out an arcane relic, the Triangle of Life, and destroy it. The Triangle, created from a fallen meteor by a prehistoric civilization, gives its owners control over time and space, and it can only be accessed when all nine planets become aligned—which they are just about to do, for the first time in 5,000 years. Both Lara and an inevitable band of enemy tomb raiders, the Illuminati, have just one chance to find the Triangle, though its usage has already destroyed the people who first created the object, and may well spell doom for modern existence.

The time-changing element of the Triangle holds the greatest significance for Lara Croft. Her father’s disappearance has cheated her of the time she could have enjoyed with him, and she considers going against her late father’s wishes in order to violate time and bring him back to life. Clocks and clockwork symbols abound throughout TOMB RAIDER, as if the scripter was afraid the audience might not pick up on The Temptation of Lara regarding escaping the surly bonds of time. As a slight mirroring of the heroine’s father-dilemma, her primary opponent, an Illuminati servant named Powell, reports to an older commander at first, but eventually overthrows his mentor in his quest for power. Throughout the adventure—and director Simon West supplies the viewer with numerous strong set-pieces—Lara has ambiguous encounters with entities that may be time-guardians of some sort—talking to her dead father in a dream, meeting Asian children who seem to know all about her. The climax includes Powell offering Lara a devil’s bargain, that of using the Triangle to resuscitate a love-interest she’s picked up along the way (a not-yet-famous Daniel Craig). But Lara proves herself a hero both by refusing the bargain and kicking Powell’s ass in one of the more credible female-against-male battles in American action-film. Indeed, Jolie’s transformation into a lean-and-mean tough girl sells the film far more than any single set-piece.

Whereas the first Lara Croft film wrapped itself in the metaphysics of time and space, CRADLE OF LIFE attempts to do so with the genesis on all life on Earth. The titular cradle refers to a domain in Africa where a meteor (another one?) fell to Earth and was forged into a mystic box, later conflated with the Pandora’s Box of folklore. In an illustration of the aphorism “Nothing repeats like success,” this item is like the light-triangle another means by which unscrupulous tomb raiders can seek to rule the world—but only by getting Lara’s help.

Since the first film allowed the heroine to lay her father-complex to rest, this does allow Lara more time for romance, as she rekindles relations with an old flame name of Terry (Gerard Butler, also not yet famous). Lara and Terry have been in the same business, and their past hookups haven’t kept Terry from poaching on Lara’s discoveries. Nevertheless, they seek out Pandora’s Box, while pursued by a rather forgettable group of bad guys. The repetition of familiar elements continues on through the climax, where once again Lara must make a momentous decision in order to triumph. 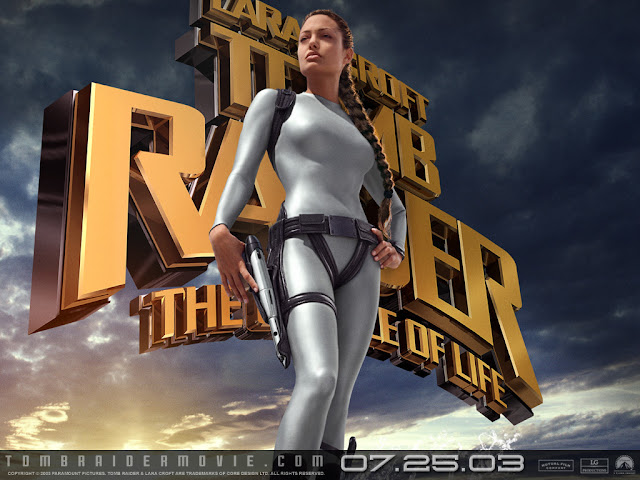 The LARA CROFT script might have been a little overdone with its reiteration of time-motifs, but the script for CRADLE is by comparison underdone. The metaphysical ideas of the genesis of life and all the association inherent in the myth of Pandora’s Box are trotted out like show-ponies, but they never become an organic part of the narrative. More tellingly, though Jolie still looks great doing her stunts, the script just doesn’t deliver on exciting spectacle. This is presumably not the failure of director Jan deBont, who had become famous for his work on the thriller SPEED, and who more or less dropped out of the directing chair after the second and last Lara Croft movie. In one online interview deBont complained that the producers cut his budget significantly, which may have compromised the action-quotient. Viewers did not embrace the sequel at the box office, and though there are rumors that it might have been just profitable enough for another outing, it’s hard to imagine the studios pumping the dollars back into the series. Thus it was providential that Jolie refused to reprise the Tomb Raider role again, for another entry would have been cheaper still, showing that there’s more than one bad thing that can come from robbing the CRADLE.

Posted by Gene Phillips at 12:04 PM
Email ThisBlogThis!Share to TwitterShare to FacebookShare to Pinterest
Labels: combative adventures, the marvelous