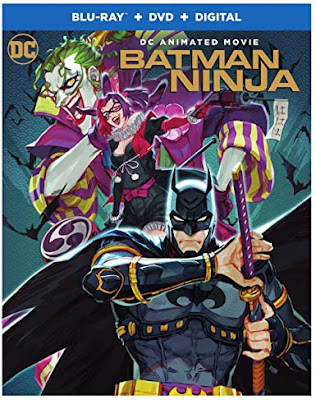 In “The Ballad of East and West,” Rudyard Kipling averred that East and West would never meet in any meaningful way, except in the situation where “two strong men” of the opposed cultures took one another’s measure and came to appreciate one another’s substance. In BATMAN NINJA we have a sort of meeting—or maybe just a collision—between the Western pop-mythology of Batman comics and the tropes of a specific Eastern culture, that of Japan. Given the way Japanese pop culture has thoroughly imbricated that of the United States, this sounds like this ought to be a good idea. It’s still a good idea, even if this is a terrible execution.

The producers might have opted for an “Elseworlds” approach, in which Batman and his support-cast might have been transformed into Japanese avatars of their normal selves. Instead, they go the time-travel route. For no sound reason, Gorilla Grodd—best known as a villain for the Flash more than for Batman—decides to test a time-travel machine at Gotham’s famed booby hatch, Arkham Asylum. By accident or design, Grodd gets flung back in time, along with six Bat-villains: Joker, Harley Quinn, Penguin, Two-Face, Poison Ivy and Deathstroke (the last also not a Bat-regular). Batman happens to be on the scene with four, count ‘em four, of his Robin-brigade, and his butler Alfred too. Oh, and Catwoman is also caught in the time-vortex, though it’s never clear what she was doing at Arkham. All of them end up in medieval Japan, In order that the script can make Batman the “odd man out” who gets everything explained to him, the caped crusader materializes two years after everyone else in the cast. Thus, all the other characters have established themselves in Nipponese culture during the era of “the warring states,” when various feudal states were in perpetual conflict for the goal of power.

Catwoman, clad in a not-very-Japanese version of her costume, gets to explain to Bats how all seven villains have taken control of assorted Japanese domains. The script glosses over how seven non-Asian criminals—one of whom is a talking ape—managed to edge their way into the command of kingdoms made up of a very homogenous people. In essence, the script merely recycles the idea of crime-kingpins divvying up different quarters of some big city, with no notion as to how such a concept would play out in a medieval Asian country. Most of the super-crooks are content to fight amongst themselves, and to prepare for the advent of the “Bat-ninja,” but Grodd has some sort of plan to get rid of all humans and turn everything into a “medieval world of the apes.”

Though the wandering script cries out for more humor—maybe someone could have sung, “I think I’m turning Japanese?”—at least Joker, unlike the other fiends, more or less fits the mold of the autocratic feudal lord. Maybe it helps that his clown-face may make one think of kabuki-actors. He gets all the good lines and most of the fights, while the others are mopped up by Catwoman and the Robin-brigade. The art-design is very florid and busy, but it does give the viewer something to look at, given that the action scenes are overly mannered. Batman transforms into a bat-ninja credibly enough, but the writer should have confined the conflict to the hero and the Kabuki Prince of Crime, since no one else comes off well. It’s merely annoying to have Alfred whip together versions of the Batcave and the Batmobile for his master. But when the script decides that it’s going to riff the “transforming giant robots” genre in this non-technological era, this indicates that the writers had scant respect for the basic idea. (The Japanese script differs in some minor ways from the American dialogue, and since I watched the American dub with the Japanese subtitles, I tend to think all the creators were equally meretricious.)

Grodd is defeated, the world is saved, and everyone goes back to the 20th century. I’m rather surprised that the writers didn’t work in any important Japanese characters, fictional or historical, to either help or hinder Batman. There’s a cadre of ninjas who take Batman as their totem, though none of them are developed individuals, and one of the Robins befriends a pet monkey. Not exactly a stellar showing for the culture of Old Japan.

Posted by Gene Phillips at 12:51 PM
Email ThisBlogThis!Share to TwitterShare to FacebookShare to Pinterest
Labels: combative adventures, the marvelous