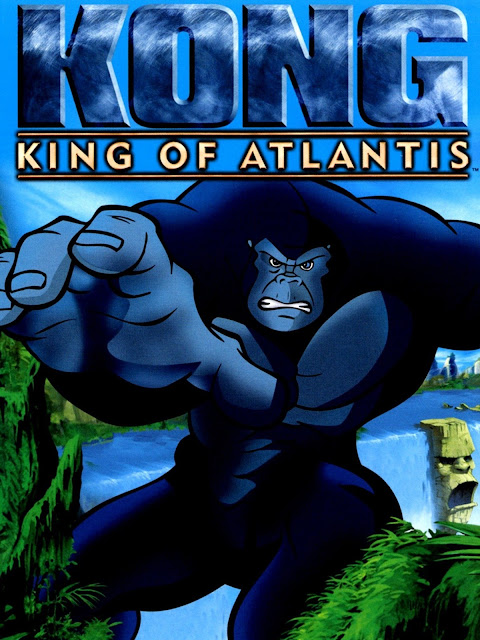 Though I liked GODZILLA VS. KONG, the movie was certainly replete with daffy notions. The weirdest by far was the idea that this version of Kong descended from a race of giant apes who weren’t just big animals, but some sort of semi-intelligent, tool-using creatures. The movie even built on the “king” part of the giant ape’s name by having him sit in a throne, bearing an ersatz version of a scepter. But goofy as the idea was, the 2021 film was not the first time Kong wore kingly raiment.

Prior to checking out this streaming animated video, I had seen the same production company launch the 2001 KONG THE ANIMATED SERIES on kidvid-TV. The show may have taken a page from the 1933 SON OF KONG, where the savage, man-eating colossus Kong somehow sired a kinder, gentler offspring. In the TV show, Original Kong is long dead, and there’s no mention of any of his human opponents. But a scientist took genetic material from the dead ape and produced a new giant anthropoid to rule over the monsters of “Kong Island.” For good measure, the scientist also used genetic material from an adventurous youth named Jason, with the result that Kong and Jason have a psychic connection, enabling the human guy to merge with Kong when the big ape thrashes giant-sized opponents. And for even more good measure, a copper-skinned jungle beauty, Lua, also hangs around Kong in order to tell him how to use his big muscles in the service of justice.

The series ended, but in order to profit from Peter Jackson’s KING KONG, the showrunners decided to turn out this DTV item. The basic concept is that of the “innocent duped into royal service.” It seems that after being off the grid for centuries, ancient Atlantis gets reborn, and the reigning quasi-human race, who are mostly human-serpent hybrids, decide they want Kong to be their king. Although Lua and Jason don’t always agree on how to counsel Kong—and there’s a very tedious sequence devoted to their disagreements—they both suspect the big guy is being sold a bill of goods. Not surprisingly, since the script recycles numerous old “palace intrigue” tropes, the serpent-tyrants are opposed by another bunch of hybrids seeking to overthrow the bad rulers. The evil snake-people, who sport names like “Reptilla” and “Sycopha,” have some ulterior motive in making Kong their king, but I’ve already forgotten that detail. Suffice to say, thanks to his human buddies Kong remains uncrowned—though, since the big ape can’t communicate, one never knows what he thinks of the whole royalty game.

I’ve seen a lot of worse animation than ATLANTIS, though the creators lose points for injecting a lot of awful doggerel-songs into the mix. There’s a little good action toward the end, when Kong fights two big lizard-dinos—and unlike GODZILLA/KONG, it’s the lizards who are swinging big weapons. The idea of Kong being a literal king of any sort is pretty stupid, but the stupidity certainly fits this oddball offering more than it gelled with the multimillion-dollar monster-mash.

Posted by Gene Phillips at 12:34 PM
Email ThisBlogThis!Share to TwitterShare to FacebookShare to Pinterest
Labels: combative adventures, the marvelous