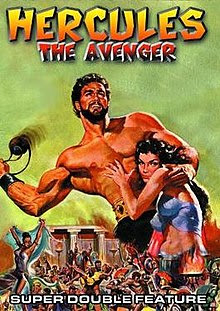 Most cut-and-paste films-- that is, flicks that employ large quantities of footage from earlier movies-- are just examples of studios saving money by churning out used goods. I'm sure that saving money was the first consideration of the Italian producers of HERCULES THE AVENGER, which pads its running time with copious scenes from two 1961 Herc-flicks, HERCULES IN THE HAUNTED WORLD and HERCULES AND THE CAPTIVE WOMEN. Since bodybuilder Reg Park played the indomitable Greek hero in both of these earlier films, the filmmakers only had to provide a handful of new scenes with Park and with other actors to flesh out the new narrative, which borrows heavily from HAUNTED WORLD and lightly from CAPTIVE WOMEN.

All that said, AVENGER provides an interesting take on the storyline of HAUNTED WORLD. One plot-line is completely new: Leda, Queen of Syracuse, has lost her king-husband Cadmus, and a group of rival monarchs insist that she should marry one of them now. Leda, like Penelope before her, desires no such alliance, and she journeys to Thebes to succor help from the famed strongman.

Hercules, though, has his own problems. Not long after mentioning to his wife Deianira that he lives under the curse of the earth-goddess Gaia because the hero slew her child the Hydra, the couple's stripling son Xanthus is attacked by a lion, implicitly by the will of Gaia. Xanthus is brought back to the palace in Thebes, but though he has survived the wounds of the lion's claws, the young man has gone insane because Gaia has drawn his soul into the underworld. Hercules is informed that even his heavenly father cannot overrule the curse of the earth-goddess, and so he must journey into the death-realm to free his son's soul. This is in many ways a more affecting situation than the original from HAUNTED WORLD, in which Hercules seeks a token from the death-domain to save the memory of Deianira, who's not his wife or even his intended.

HAUNTED WORLD also boasted a take on the Greek "exchange of prisoners" trope, in that Persephone, daughter of the death-god, returns to the world of the living with Hercules and his buddies, but must eventually return to the underworld. AVENGER's take on this trope is to introduce Anteaus, son of Gaia. While Hercules descends into Gaia's domain to save Xanthus, the goddess sends her son-- who's strong, but not as strong as Hercules-- up to the mortal world to assume Hercules' name. One might think a proper vengeance would have Gaia send Antaeus after the helpless Deianira. However, for some reason Anteaus ends up lending his support to Leda, tossing out all of her would-be bridegrooms. However, Antaeus quickly becomes the cure that's worse than the disease, and he brings great suffering upon Syracuse.

As a result of Hercules' labors in the death-realm, he liberates the spirit of Xanthus, who regains his sanity. But when Hercules returns to the mortal world, he learns that Antaeus has usurped his good name. An oracle helpfully informs the hero that all the good people have deserted Syracuse, which is now a "nest of vipers"-- and so ripe for a Sodom-and-Gomorrah fate (even though Queen Leda is essentially innocent of wrongdoing). With Zeus's help Syracuse perishes in flames, while Hercules gets a final duke-it-out scene with his evil impostor. This battle echoes the encounter of the two characters in antiquity, where Hercules triumphs when he's able to keep the earth-mother's son from touching ground.

All in all, this is a good little action-melodrama, as well as being a good deal more inventive than most of the duller all-original efforts.

Posted by Gene Phillips at 3:02 PM