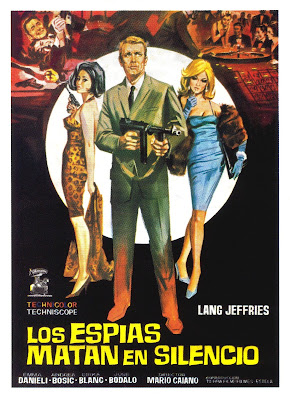 Before watching this 1966 Italian-Spanish Eurospy thriller-- whose literal name in Spanish is more like "spies kill silently"-- I noticed that it was directed and co-written by Mario Caiano, who performed the same duties on one of my favorite giallos, 1972's THE EYE IN THE LABYRINTH.  I don't think this knowledge prejudiced me to give SPIES special favor. Yet some might think it significant that it's the first Eurospy whose mythicity I've rated above the level of "fair."

I was rather impressed by the way SPIES begins; not with the spy-hero getting his latest assignment or villains ripping off some complex. Instead, following a colorful theme-opening (replete with checkerboard-patterns seen in other parts of the narrative proper), we see a peaceful conversation in Beirut between two pretty girls and an older man with the name of Doctor Rashid (a peculiar name, since the rle is played by Andrea Bosic, who doesn't look the least bit like a Middle Easterner). They chitchat for a while. mentioning that Rashid is a scientist-- and then we get the introduction of the main hero, Mike Drum (Lang Jeffries). Some mysterious murders have been committed, and one of the victims was the daughter of a vital scientist. So Drum investigates-- and almost immediately, someone starts shooting at him.

Aside from the chitchat, most Eurospies proceed similarly, as if the spy-hero was a military commando who was empowered to seek out and destroy the enemies of his country. While SPIES does have that element as well, it really does feel more like a thriller emphasizing the uncertainty of the spy business. Drum's intelligence contacts in Beirut aren't thrilled to be working with an American agent; they think he's going to believe himself to be James Bond. In due time Drum proves that he's got the stuff, and although he does eventually cross paths with both of the sexy women from the opening sequence, Drum doesn't really seduce them in the approved Sean Connery style. Moreover, as in more realistic espionage tales, there's at least some concern that one's allies may turn into enemies at the drop of a hat.

Like both the book and movie DOCTOR NO, SPIES starts out looking like a mundane adventure-tale, only to ratchet up into wild metaphenomenal fantasy in the second half. Probably no one will be surprised that the urbane Doctor Rashid is a scientific mastermind seeking to use a special device to control people's minds. But some may be surprised when the villain actually does succeed in taking control of the hero's mind and sending him on a mission of murder, which mission is only foiled by the hero's dumb luck. While under this hypnosis Drum is seen marching along with dark glasses on his eyes, making him seem more like an automaton. Rashid gets a florid villain's speech in which he reveals a Nietzchean ambition to control all the little people:  "I look upon mankind from a superior level." Rashid isn't given any real background, but he shares Doctor No's Napoleon-complex, eventually comparing himself to "Prometheus Unbound." In the big climax, he shows off a ray-device that can not only overrule human wills but also has a double function as a disintegrator-- which pretty much telegraphs the script's intention to have someone get disintegrated.

Caiano's control of colorful backgrounds is quite impressive given what must have been a humble budget. The film's only flaw is that none of the action-sequences are first-rate, though the final struggle between Drum and Rashid evokes a few memories of the battle between Bond and Goldfinger in the Fleming book.