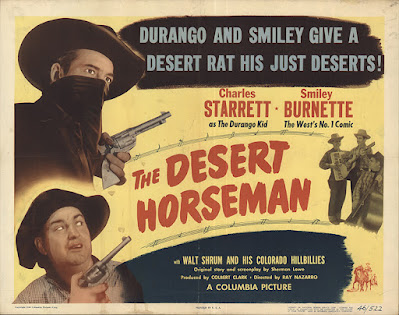 Though some army officers on horses are killed by bandits in the desert, I've watched this trifle twice and can't think what "horseman" is being referenced by the title. In all likelihood, it was just a tag that someone flung onto this B-western in haste.

Over the course of 65 oaters churned out starring the masked Durango Kid, the writers never sought to establish a consistent alter ego for the hero. This time he's a traveling cowpoke, Steve Godfrey, who gets accused of the army payroll robbery. When Steve finds the body of a slain man, he brings it to the closest town, where he meets an old buddy, Smiley Burnette (played by the actor of the same name). Steve makes it his business to solve the payroll crime, in the person of the Durango Kid. Somehow the big boss behind it all is also trying to force a pretty young thing to sell her property, which was perhaps the most popular plot in B-westerns.

Though there's some decent photography of the outdoor scenes, it's a pretty pitiful horse opera when the most memorable action-scene takes place when the comic sidekick tosses pepper in the eyes of several owlhoots.

Posted by Gene Phillips at 3:27 PM
Email ThisBlogThis!Share to TwitterShare to FacebookShare to Pinterest
Labels: combative adventures, outre outfits (u), the uncanny