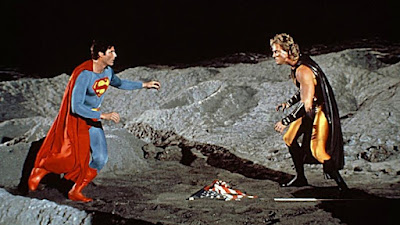 As entertainment, SUPERMAN IV almost makes SUPERMAN III look good, and not only because the latter has better production values.

To be sure, the most frequent complaint against the 1987 film-- which I'll hereafter abbreviate as QUEST-- is that when the franchise was transferred from the Salkinds to the Cannon Group, the latter producers pinched so many pennies that they had copper on their fingers. One of the major selling points of the franchise-- that the FX would make audiences "believe a man can fly"-- thus went down the tubes, and audiences accordingly stayed away, thus ending the Superman movie franchise for the next 19 years. But I might have lived with chintzy production values if the writing-team of Lawrence Konnor and Mark Rosenthal had been able to do anything impressive with actor Christopher Reeve's threadbare idea of "Superman tosses the world's nuclear weapons into the sun."

I presume that Reeve's idea arose from a problem that many readers have had with Superman: if he can do anything, why doesn't he change the world radically, rather than just stamping out occasional evils like a super-patrolman? Even the original comics have had only mixed success in trying to elaborate an answer to this question, which usually boils down to "humans must forge their own destiny" or the like. This isn't a bad answer, but it's almost always expressed in a pedestrian manner, so as to avoid transgressing against the status quo of the series. Indeed, this is pretty much what Reeve's Superman ends up stating at the end of QUEST, after he's learned that "no nukes" can have dire consequences-- both for him and for Earth.

Whereas the David and Leslie Newman script for SUPERMAN III was IMO ponderous, that of Rosenthal and Konnor has a herky-jerky quality, as if the writers didn't know what part of the Superman mythology they ought to focus on. An early scene has Clark Kent (Reeve) back on the Kent farm, communicating with the hologram of his late mother as she gives him some info on a Kryptonian deus ex machina that will come in handy later. Then Kent returns to Metropolis, once more meeting with series regulars Lois Lane (Margot Kidder), Jimmy Olsen (Marc McClure) and Perry White (Jackie Coogan). All of the Planet staff soon learn that the Daily Planet has been bought by an exploitative high-rolling businessman who promptly assigns management of the newspaper to his daughter Lacy Warfield (Mariel Hemingway). Though there's clearly some intent to rag on money-mad investors like Rupert Murdoch, any satirical point gets lost by a fatuous romance subplot, in which Lacy becomes attracted to Clark Kent even as Lois continues to be dotty over the Man of Steel. This is one of the few things SUPERMAN III-- which promoted a similar attraction between Clark and Lana Lang-- did better than QUEST. Rosenthal and Konnor's only notion of what to do with this "eternal quadrangle" was to roll out some tired comic business about Superman trying to keep dates with both Lois and Lacy in both of his identities.

Gene Hackman's Lex Luthor is certainly an improvement over Ross Webster of #3, but this time out he's saddled with an even worse sidekick than the bungling Otis: Lex's insipid nephew Lenny (Jon Cryer, who would turn out to make a pretty good Luthor much later on the SUPERGIRL TV show). After Superman gathers up Earth's missiles for sun-disposal, Luthor reflects that the sun itself is a nuclear bomb of sorts, and that it may be able to spawn an "imperfect duplicate" of Superman. The villain gets hold of a single hair from Superman's head, attaches it to a new missile, and when the hero hurls the offending weapon into the sun, it spawns another super-powered being, the largely inarticulate Nuclear Man (Mark Pillow).

As poor as the script is, I can see some potential in the basic imagery here, which is the only reason I gave QUEST a "fair" mythicity rating. Superman attempts to get rid of Earth's nuclear weapons by tossing them into the sun. In rude poetic terms, the weapons "get even" by spawning their own champion who journeys to Earth and almost kills the hero. The script also blows the dramatic potential of Superman being sick from radiation poisoning, given that the audience knows from the get-go that he can invoke the Kryptonian Whatsis to make himself better. Nuclear Man, though, is not capable of sustaining the poetic association. Rosenthal and Konnor apparently wanted him to be inarticulate like the Universal Frankenstein Monster, at most rebelling weakly against the control of Lex Luthor and falling in love with Lacy Warfield (whose charms I found non-existent). The latter trope makes it likely that the scripters were channeling the basic idea of the Superman-foe Bizarro. Rosenthal and Konnor probably would have screwed up that Superman character as well, but at least they would have been working from a character with some pathos in his makeup.

There are entertaining bits and pieces in QUEST. Reeve makes the most of his last performance as the Man of Steel, exuding homespun sincerity even in tiresome situations. The other regulars are okay, and I rather liked a fight-scene between hero and nuclear monster on the moon. I think this sequence is still the only live-action film to attempt duplicating the old comic-book visual schtick where one character literally pounds another into the ground like a tent-peg.

Posted by Gene Phillips at 2:15 PM
Email ThisBlogThis!Share to TwitterShare to FacebookShare to Pinterest
Labels: combative adventures, the marvelous