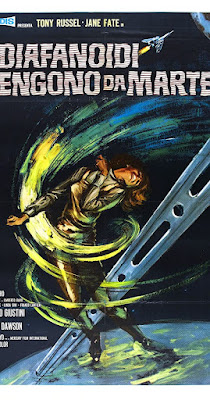 WAR OF THE PLANETS was the second of Italian director Antonio Margheriti's "Gamma One" tetralogy. I happened to see the first flick in the series first, THE WILD WILD PLANET (which justified that title), and next to that brain-damaged bit of space opera, WAR seemed rather routine and chintzy.

On re-viewing WAR, though, I find it holds some appeal different from that of the first film. The story concerns how the crew of the futuristic space station Alpha Two is menaced by energy-aliens known as "diaphanoids." (An alternate title for the film is THE DEADLY DIAPHANOIDS.) The aliens are easily the most underwhelming aspect of the film, for they're always represented by nothing more than green swirls of smoke.

However, Margheriti's depiction of life on the space station is much more lively and appealing than that of a lot of SF-films of the time. The main characters are Commander Mike Halstead (Tony Russel) and his girlfriend, communications officer Connie (Lisa Gastoni), but their respective ranks get in the way. In their first scene together, she objects to him expecting her to tamp down her feelings despite the military hierarchy to which both belong. I wouldn't go so far as to say Margheriti or his writers were attempting to make a philosophical point as such, but the script does keep coming back to the conflict between individuality and authority-- seen at its most tyrannical in the menace of the insubstantial Diaphanoids. By chance, the filmmakers touched on a conflict which would appear throughout Gene Roddenberry's seminal STAR TREK series, which debuted on American TV the same year.

The evil cloud-aliens start possessing human beings, which makes it much easier for them to communicate through their pawns. One of these characters, Captain Dubois, actually seems to struggle against the possession, communicating more than a little sense of what it means to have one's will subsumed. Thus, when Halstead eventually finds a means to expel the possessors, there's a little more emotional context to the victory than one sees in, say, THE GREEN SLIME.

Similarly, though the relationship between Halstead and Connie is fairly sexist, at least it doesn't feel SLIME-y by having the main hero get rid of his romantic competition to win the girl, as SLIME did. So WAR OF THE PLANETS is at least a modestly pleasing thriller, but nothing more.

Posted by Gene Phillips at 3:30 PM