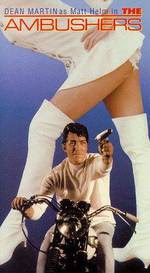 
"Blonde hair, brunette, redheads/lying like injuns in the grass/they're comin' through the pass/and buster/you're General Custer".-- Boyce and Hart, theme song to THE AMBUSHERS.

Continuing my meandering review of spyfilms in terms of the AUM theory, here's one that makes no bones about abandoning any connection to the "real world" (as against the original Matt Helm books of Donald Hamilton, which are entirely grounded in the world of "atypical" phenomenality). AMBUSHERS, third in the series of Matt Helm spyflicks, features almost nothing but one crazy marvel after another-- a flying saucer, a beam that melts belt buckles, "happy gas," levitation rays, and so on.

The sort of sociological motifs that govern many spyfilms-- that is, relating to the conflict of cultures-- has little application to the Helm flicks, which are essentially frothy setups for endless sex jokes for the Playboy generation. However, though none of the characters are any deeper than a character in a sex joke, there are a few moments where the Playboy aesthetic wears thin.

Though it's the third in the series, I saw it first on broadcast TV, and remember thinking that for a frothy film it had a momentary hard edge at the start, in that Helm is investigating the ordeal that robs his spy-colleague Shiela Sommers (Janice Rule) of her memory. One imdb viewer thought the script implies that Shiela had been raped by the film's villain Ortega (Albert Salmi). The film certainly never states this outright, though it's a view substantiated by a later scene when Ortega tries to get busy with Shiela. She does end up being the cause of Ortega's death, which fits the rape-revenge motif, even if Shiela shows little or no trauma following the film's first half-hour.

There's also an interesting dialectic here: are women empowered in the Helm films or not? The "sex-joke" aspect of the films plays to the fantasy of women who are instantly willing to gratify male desires, without imposing any particular demands for gratification themselves. OTOH, both Rule and badgirl Senta Berger are active participants in the action, rather than damsels in distress. The film also tosses out a bevy of beauties called the Slaygirls, who only have a couple of scenes in the film proper but are the main focus of the Boyce & Hart theme song. One of the scenes filmed for the theme-montage, co-ordinated with the "injuns in the grass" lines, shows the Slaygirls stalking a young man walking along with a bouquet. Half a dozen girls then jump the not-unfortunate young swain, at which point the montage cuts to a standard scene of Indians on the warpath. It's not the sort of feminine empowerment that would please Andrea Dworkin, but it does make a nice counter to the Playboy aesthetic of the pliable pussy.

I take this tossoff motif to be more emblematic of the empowerment of female spies in pop culture than any particular originality on the part of the Matt Helm flicks. But that's a subject for another essay.
Posted by Gene Phillips at 3:14 PM
Email ThisBlogThis!Share to TwitterShare to FacebookShare to Pinterest
Labels: combative adventures, the marvelous