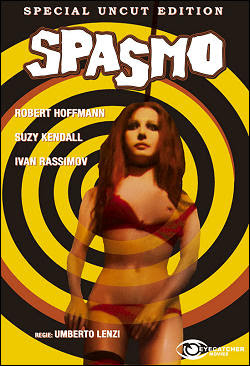 SPOILER WARNING as the resolution of this giallo is discussed in detail.


I screened the "Shriek Show" DVD edition of this 1974 Italian thriller, which fortunately came with the bonus of a short interview with director Umberto Lenzi. This was fortunate for me because the interview enlightened me as to why the story fails even on the generous terms one usually gives to the giallo genre.

Since the inception of the genre-- usually traced back to Mario Bava's 1964 opus BLOOD AND BLACK LACE-- most enthusiasts usually don't mind the convoluted plotlines or the often shallow characterizations. The giallo's main attraction has usually been the fetishization of sex and death, often though not always in a form Edgar Allan Poe might've liked: the deaths of beautiful women.

Lenzi's interview stresses that he didn't initiate SPASMO; that he inherited it from another director and had to rewrite the script to his liking. By that time Lenzi had already become a success with scripts he wrote for himself, notably his first giallo outing ORGAZMO (1969), but as I've not seen any of these in a long time, I can't make a just comparison between Lenzi's other works and SPASMO. Still, I would state that SPASMO fails to come up to the level of other superior giallo works.

Other online reviews note that this is a rare bird for the genre in that it contains almost no blood or gore. Thus SPASMO is largely deprived of its best-known facet: the devising of artful set-pieces involving murder. It's not impossible for a giallo to stress suspense over gore, of course, but Lenzi's characters aren't involving enough to generate said suspense.

The opening is intriguing enough, as wealthy young man Christian Bauman and a girlfriend encounter a woman, Barbara (Suzy Kendall) on a beach. Initially they believe she's dead, and Lenzi gives the scene enough ambience that the sunlit beach still seems creepy even after Barbara proves to be alive. A little later, Christian and Barbara meet again at a party. Barbara seduces Christian back at her place-- but this good fortune leads to Christian's worst day ever. A man, possibly an agent of Barbara's former lover, breaks in, brandishing a gun. Christian fights with the man over the gun and the man is apparently killed. Barbara helps Christian get away, and the two take refuge in a mansion owned by one of Barbara's friends. The friend isn't home, but Christian and Barbara have to share the place with a mysterious old man and a pretty young woman Clorinda while listening to confusing police reports about the incident. Later Clorinda seduces Christian while Barbara mysteriously disappears. Oh, and the house has a weird aviary, allowing for many psychedelic shots of assorted birds.

By this point in the story it seems pretty obvious that Barbara, Clorinda and the old man are part of some larger scheme, and this is the point where Lenzi chooses to reveal that the gunman is still alive. The overall plot is being engineered by Christian's brother Fritz, but for once the villain isn't motivated purely by gain. Fritz stage-manages Christian's troubles with the long-range purpose of getting Christian committed, because Christian actually is crazy. The truth of this suspicion is disclosed at the very end, where it's revealed that Christian has actually killed every woman he's come in contact with-- strangled, slashed, etc. Even though these deaths aren't bloody one almost fees like Lenzi was making up for lost time by introducing so many slain females. Fritz ends up killing Christian-- but then it's implied that Fritz too suffers from some mental abnormality, and the film ends with yet another psychotic menace on the loose.

One might think that in a thriller involving a psychotic killer, I might've identified one of its Campbellian functions as "psychological." This I couldn't do, for the film shows too little interest in how an aberrant psychology develops. Lenzi's DVD interview, however, makes clear that what Lenzi actually had on his mind was a *sociological* meaning. Lenzi claims that in this film and his other giallos, he seeks to identify a psychological "malaise" in the world of rich people, whose "excesses" drive them to committ unspeakable acts. Thus in Lenzi's world the reply to F. Scott Fitzgerald's famed statement, "The rich are very different from us" would be, "Yes, they kill more people."

In essence, this is Lenzi demonizing the upper class as a haven for psychotics, much as I, CLAUDIUS showed the Roman emperors as a inbred society full of bizarre aberrations. This sociological motif could have yielded fertile ground for a good thriller, but precisely because Lenzi keeps back the psycho-reveal till the last, focusing for most of the movie on the Gothic fakeout plot, Lenzi never sells the viewer on the inherent corruption of the upper class. The mere fact that I only got the concept when I heard him talk about it suggests that he didn't put the idea across adequately.

Still, I am intrigued enough to check out other Lenzi thrillers in future, to see whether or not he achieved this theme more successfully elsewhere.
Posted by Gene Phillips at 3:47 PM
Email ThisBlogThis!Share to TwitterShare to FacebookShare to Pinterest
Labels: perilous psychos (u), phantasmal figurations (u), the uncanny