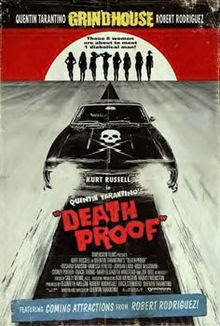 The category of "perilous psychos" may be one of the most familiar tropes of "the uncanny"-- that is, one of the few I've devised that doesn't need much elaboration. Perhaps because it seems obvious to me, I haven't analyzed but two films in this category, and one of them, THE MISSING JUROR, I judged to be outside the domain of the metaphenomenal.

DEATH PROOF was hyped by filmmaker Quentin Tarantino as his commentary on the slasher-genre, but seems to have taken shape primarily from his fascination with the "bad old days" of cinema's "fast-car genre," as per this comment from Wikipedia:

The story for Death Proof developed from Quentin Tarantino's fascination for the way stuntmen would “death-proof” stunt cars so a driver could survive horrific, high-speed crashes and collisions.

Even taking into account the fact that Tarantino intended to deconstruct what might better be termed the "psycho-stalker" film-- given that the villain of DEATH PROOF doesn't "slash" anyone-- overall DEATH PROOF shows more generic resemblance to fast-car thrillers than to horror films. Of the many films that have dealt with the subject of vehicular mayhem, few transcend the mundane realm of the thriller and inculcate the "strangeness" necessary for a metaphenomenal film-- one of those few being Steven Spielberg's 1971 DUEL.

To add to the difficulty, Tarantino divides DEATH PROOF into two distinct parts, each seeming to have its own phenomenality.

The second half, taking place 14 months later, deals with Mike's attempt to assault another group of females, two of whom, unbeknownst to him, are experienced stuntwomen. Mike catches the three women out in the desert doing a dangerous stunt: one stuntwoman, Kim, drives a car very fast while her fellow stunt-comrade Zoe rides on the hood and while third female Abernathy, an acquaintance from the film they're all working on, goes along trying to be as cool as the other two. Mike's assault this time, rather than ramming the women's car directly, consists of repeatedly slamming them from behind-- possibly because this time his car isn't quite as heavily reinforced. However, driver Kim is skillful enough not to get wrecked, and in a turnabout very unlike anything in most psycho-stalker films, the women not only overcome the stalker but also savagely beat and murder him.

If Tarantino had taken the essential events of the film's last half and expanded those alone into a film, with no reference to the "death proof" car or various stalker tropes, I'd probably deem that film's phenomenality "atypical," along the lines of a similar thriller like J.J. Abrams' 2001 flick JOY RIDE.

The "death car" fits the uncanniness trope "outre outfits skills and weapons," in that said car, though obviously within the domain of existing technology, takes on the aura of the uncanny, much like a lot of the unique weaponry one finds in a James Bond film. The car's skull-hood design provides the "creep factor" usually supplied in stalker-films by the killer himself wearing some bizarre disguise. Indeed, early victim Arlene (Vanessa Ferlitto) sees the car long before she sees its driver, first in broad daylight and later in a night-shrouded parking lot. Stuntman Mike himself displays no "creep factor" to speak of: at worst he wears his hair and clothes to suggest his ties to bygone eras of fashion. Even a prominent scar doesn't make Mike look particular sinister, and he's initially charming enough that he even talks Arlene in giving him a lapdance.

Tarantino certainly chooses to make his "perilous psycho" the obverse of the more typical stalkers: Mike is neither a fidgety nerd like Norman Bates nor an obsessed hulk like Jason Voorhees. But he does share both stalkers' need to find sexual gratification through violence, though Tarantino never provides more than broad hints as to Mike's personal psychological makeup.

In terms of Campbellian function the sociological function is stronger than that of the psychological, for much of DEATH PROOF concerns the "war between men and women." In psycho-stalker films this conflict is not as pronounced as many stalker-haters have claimed, in that the stalkers often target male victims as well. There's probably some truth to the claim that on average the deadly fates of female victims may be treated with greater levels of spectacle, though as yet no one's provided a precise breakdown of male/female deaths and a dependable criterion for "spectacle."

DEATH PROOF definitely breaks down the alleged conservatism of the stalker subgenre in that in both sections, all of the females, whether real or only potential victims, seem to be sexually active, with the possible excepion of Zoe Bell, who's not playing a character as such but rather a fictionalized version of herself. Thus there's no resemblance to the alleged paradigm of stalker-films, in which "bad girls" are killed horribly while a "virgin" survives in the end. The first group of girls to die merely have bad luck, while the second group not only best the stuntman on his own terms but essentially execute a justifiable lynching for Mike's crimes against womanhood. To be sure DEATH PROOF conjures with other themes as well, as is typical of Tarantino's multi-levelled, heavily-referential approach to moviemaking. But the film's sexual politics seem to be the most pervasive aspect of the story.

A note on my assigning this film to the Fryean mythos of "drama:" as I've detailed on THE ARCHETYPAL ARCHIVE, I tend to view the majority of horror-films as belonging to this mythos because most horror films focus not on the triumphs of the hero (which are the focus of the adventure-mythos) but on the depradations of the horrific menace. DEATH PROOF does end with a heroic triumph, and one that's much more "adventurous" than, say, Dennis Weaver's last-ditch maneuver to destroy his opponent in DUEL. But the majority of the film deals with two groups of women interacting in casual fashion, perhaps executing their own "female-bonding" rituals, only to have their worlds torn apart by a psychotic menace. This connotes for me the purgative world of the drama, rather than the invigorative world of adventure.
Posted by Gene Phillips at 1:26 PM
Email ThisBlogThis!Share to TwitterShare to FacebookShare to Pinterest
Labels: combative dramas, diabolical devices (u), perilous psychos (u), the uncanny