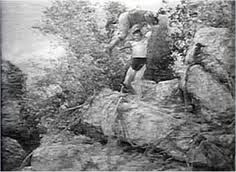 The fourth of Lex Barker's Tarzan films is probably the most exciting of the Barker outings, thanks in large part to snappy direction by Cy (MYSTERIOUS ISLAND) Endfield and a strong script filled with rapid-fire pulp-action and some actual references to E.R. Burroughs' Tarzan books. I suspect that of the four writers credited on imdb Cyril (FORBIDDEN PLANET) Hume was the most likely to have provided these references, since he had also penned three previous Tarzan films before this, not least TARZAN THE APE MAN (1932), which jumpstarted the ape-man franchise for the sound era.

The plot here strongly recalls 1943's TARZAN TRIUMPHS, in which the sociological quarrels of the outside world impinge on Tarzan's jungle paradise. In the earlier film, the jungle is invaded by Nazi troops, but as FURY takes place during the Cold War, the villains are Communists-- although only one, Rokov (Charles Korvin), is faithful to the cause. His accomplice Edwards is an Englishman who, under Rokov's tutelage, poses as Tarzan's cousin from England. The cousin does accompany Rokov and Edwards to Africa, for the purpose of getting Tarzan's help in securing a treasure of diamonds for England's military security. However, once there Rokov kills the cousin, so that he and Edwards can obtain the diamonds for the sake of the Communist regime. References to Rokov's politics are spotty, the best being where he sneers at Edwards' being promoted from "bourgeousie" to the aristocracy through just one bullet.

In addition, the filmmakers apparently gave some thought to giving Tarzan and Jane a new "boy," played by Tommy Carlton, who in 1952 was two years older than Johnny Sheffield was when he essayed the role in TARZAN FINDS A SON! (1939). Though Tarzan calls the kid "boy" a few times, this time the orphan has a real name, Joey. Tarzan, upon hearing the kid speak English, presumes that Joey is English, and comically insists that the boy is English even after Joey claims to be an American. Carlton gives a good performance in scenes where Tarzan has to talk him into facing his fears, and even helps Tarzan out in a climactic scene, but Joey made no more appearances (and neither did Carlton as an actor).

Many Tarzan films fall into a fairly routine pattern of perils but FURY keeps up a good variety of pitfalls. After Tarzan, Jane and Joey lead Rokov's party through a scorching desert (prefiguring Endfield's later hot-spot encounter in SANDS OF THE KALAHARI), the group has a dangerous encounter with a cannibal tribe before being taken prisoner by another tribe, the Waziris, who have access to the coveted diamonds. Tarzan leaves the village in the company of a village elder, and in his absence Rokov beguiles the natives with some wild magic tricks. (This is probably one of the few, if not the only, Tarzan films that can fit my trope "enthralling hypnotism and stage magic!") Rokov then repays the natives' trust by killing their witch doctor and stealing some of their diamonds. For good measure he leaves Edwards to die in a lion pit and then tries to drop Tarzan into the pit as well. After Joey helps Tarzan escape, Tarzan returns the favor to Rokov (as seen in the illo above) and then rushes back to the village, where he's just in time to keep Jane from being sacrificed beneath the jaws of an alligator-idol.

A word on the aforementioned Burroughs-references: in the novels "the Waziri" are the first African tribe to pledge allegiance to Tarzan, and appear in many later books as his retinue. In FURY they remain autonomous to the end, and are presented with some degree of respect. The script even suggests that Darby Jones' witch doctor may have some psychic talent, since after casting the bones he sees a vision of a diamond. This causes him to intercept Rokov in the middle of ripping off the tribe's diamonds, though the witch doctor dies for his trouble. FURY is one of the few sound films to reference Tarzan's aristocratic heritage, though for convenience the origin is rewritten so that Tarzan and his father actually lived together in the jungle for some time before the father's death. In fact, the Waziri remember Tarzan's father as a man who tried to teach them the "Good Book," but thankfully this missionary motif gets very little screen time.

Rokov probably takes his name from one of the print-Tarzan's better villains, Nikolas Rokoff, a Russian (but not Communist) malefactor who gives the apeman a hard time in RETURN OF TARZAN. Here Rokov invades the jungle not with the massive *forza* used by the Nazis in TRIUMPHS, but with *froda.* One might imagine that the guile Rokov uses in his magic performance touches on the manipulations of Communist rhetoric, though to be sure the magic tricks may've come about simply because Endfield himself was a well-regarded practitioner of stage magic. Moreover, FURY was directed roughly a year after Huac named Endfield a Communist-- which may well explain why, even though the film's villains are implied Communists, there's really very little anti-Commie rhetoric here. That said, the film does suggest, better than many Tarzan films, the fate of Africa and other third-world areas being caught up in the quarrels of two opposed "Great Powers."
Posted by Gene Phillips at 1:58 PM
Email ThisBlogThis!Share to TwitterShare to FacebookShare to Pinterest
Labels: combative adventures, enthralling hypnotism and illusionism (u), exotic lands and customs (u), outre outfits (u), superlative skills (u), the uncanny