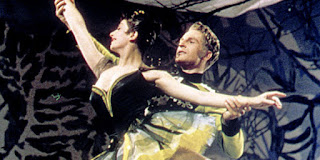 
Before reviewing this film I chose not to reference any real biographies of the famous Danish teller of original fairy-tales.  Ckearly this musical biofilm, whatever points of comparison it might have with the real life of Andersen, is first and foremost a one-sided retelling of the Country Mouse and the City Mouse.


The name of the screenplay’s author comes as a slight surprise: Moss Hart, best known for an assortment of naturalistic stage-plays and 1947’s hard-hitting “relevance drama” GENTLEMAN’S AGREEMENT.  Hart and director Charles Vidor succeed in capturing the delicate charm of Anderson’s tales, related by “country mouse” Anderson (Danny Kaye), a small-town cobbler who seeks to make his fortune in the big city of Copenhagen.  However, like the 1960s Rankin-Bass film THE DAYDREAMER—which imagined Andersen as a fanciful young boy—this film seems ambivalent on the subject of fantasy’s value.


In the opening scenes, it’s established that Andersen’s original tales are a source of great charm to the children of a small village, and at first it seems that the film is going to take the position that fantasies are good because they’re an anodyne for those times when “the world is too much with us.”  This seems the point of the film’s most famous Frank Loesser song, “Inchworm,” in which Andersen urges his audience(s) to stop and appreciate the beauty of life.  Unfortunately for Andersen, his fellow villagers don’t like him distracting their children from the business of making a living.  They plan to exile him, and the only reason they don’t is because Andersen’s adoptive son, a young teen named Peter, talks Andersen in picking up his business and moving to Copenhagen.  Andersen never learns of the negative opinion his fellow “country mice” have toward him, perhaps because the rest of the film places so much emphasis on shattering his dreams in another department.


In the big city Andersen and Peter immediately fall victim to small-minded authorities.  Andersen is jailed for having shown disrespect toward the statue of the king—a fitting touch, since the first story Andersen tells in the movie is “The Emperor’s New Clothes.”  However, Andersen’s cobbling skills come to the attention of a Copenhagen ballet company.  Andersen meets and instantly falls in love with the prima ballerina Doro (real-life ballet superstar JeanMarie).  He also witnesses her have a row with her husband, the ballet impresario Niels (Farley Granger).  Andersen begins nurturing fantasies about freeing Doro from her tyrannical husband.  Doro does nothing to encourage Andersen’s fantasies, and neither she nor Niels—fundamentally a happy couple despite their quarrels—are even aware of the cobbler’s “love from afar” until the end of the picture.  Andersen goes from being the master fantasist who inspires children to being the victim of his own self-delusion, as much as the courtiers who testified that they could see the Emperor’s clothes.


Throughout this misadventure Peter remains the sober-sided son constantly trying to pull his foolish father back from disaster.  His efforts only create a rift between the boy and Andersen, though it’s eventually healed when Andersen realizes his folly and returns to his old village.  Here the film indulges in a major cheat for the sake of a happy ending. It seems all the villagers have missed Andersen so much that they have put aside their old quarrels with his quirkiness, and Andersen can return to his “country mouse” life after being chastened by his encounter with the city variety.


From start to finish, then, Hart and Vidor choose to portray Andersen as a “child-man,” obsessed with his inner world rather than making connections in the real world.  His decision to adopt orphan Peter signals his desire to acquire a ready-made family without ever having troubled to find a wife.  Perhaps there were elements of the real Andersen’s life that encouraged the filmmakers to expouse this view of him, but it seems more likely that they were simply playing to the image of Danny Kaye as the nerd who can’t get the girl.  However, in most of Kaye’s other comedies, his characters do find connubial happiness through various merry mix-ups.  Despite the false cheer of the conclusion, HANS CHRISTIAN ANDERSEN is a rare exception to this rule, making one question as to whether the filmmakers don’t really have as demeaning a view of fantasists as Andersen’s blinkered neighbors.


Though the film has ample opportunities to adapt the famous fairy-tales into separate scenes in their own right, it does not do so.  In contrast to the many fantasy-episodes of THE DAYDREAMER, here Andersen experiences only two daydreams, and one of them is not a story, but Andersen’s mundane fantasy of fighting George for the hand of Doro.  Later, when Andersen is prevented from seeing his story “The Little Mermaid” performed as a ballet for Doro, he simply imagines the whole ballet-sequence in his head.


In my phenomenological system, a film qualifies for the status of “uncanny” if it presents dreams with such fidelity that they have their own reality within the film’s diegesis.  HANS CHRISTIAN ANDERSEN does not do this.  The challenge-daydream doesn’t maintain any level of fantastic verisimilitude, nor does the ballet.  In terms of my system, a bunch of stage-players enacting a play with fantastic content uses my trope “delirious dreams and fallacious fantasies” purely in a naturalistic manner, since in such scenarios the real-life framing-story nullifies the fantastic content.


This is not to say that my problem is with the artificiality of a stage-bound fantasy.  If someone took the  “Little Mermaid” stage-show from ANDERSEN-- presented here as an adjunct to the main tale-- and presented the sequence by itself as a straightforward adaptation of the Andersen tale, with no framing-diegesis, then that adaptation would possess marvelous phenomenality, no matter how creaky or artificial the stage-adaptation might appear.

Posted by Gene Phillips at 2:09 PM
Email ThisBlogThis!Share to TwitterShare to FacebookShare to Pinterest
Labels: delirious dreams and fallacious figments (n), the naturalistic