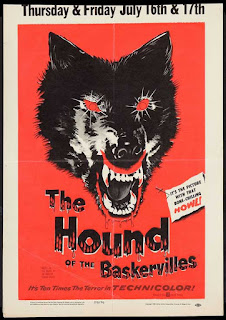 Arthur Conan Doyle’s THE HOUND OF THE BASKERVILLES is not only a classic Sherlock Holmes story; it’s also one of the foremost examples of an author adapting the Gothic trope of “the supernatural explained rationally”—aka my trope “phantasmal figuration”—to the genre of the detective story.  I don’t imagine that Doyle was the first mystery-writer to borrow from the Gothic-writer's bag of tricks.  In any case HOUND is one of the best of its kind, and arguably the Hound, despite being a false horror, is nearly as well known as Holmes himself.

This HOUND was Hammer Films’ only venture into the world of the Great Detective.  The film—directed by renowned horror-meister Terence Fisher-- is not as faithful to the novel as the 1939 film from 20th-century Fox, but Fisher’s film manages to sustain its own identity as well as delivering the mythic content of the story.

The kernel of the story that gives rise to the Hound stays essentially the same.  In the novel, an early ancestor of the Baskerville line—Hugo, an evil roisterer—kidnaps a young girl from one of his yeomen, planning to use her for his pleasure.  She escapes and he pursues her with his hounds, uttering an oath to Satan as he does so.  Satan apparently hears and sends a great hound who kills Hugo, while the girl dies of exhaustion. In the movie, the audience sees Hugo overtake the girl in a forest and knife her to death— which even a non-Freudian would probably recognize as a deferred sex act—after which a mysterious hound shows up and finishes off Hugo. Both scenarios take place in religious settings, with the book-version taking place near some pagan standing-stones and the film setting it in a ruined abbey.  The implication I read into both is that nobility feels itself free to sacrifice the lesser orders, but by so doing, they become the prey of Satan.

The Hound strikes again years later, in the era of Sherlock Holmes, when Sir Charles, reigning heir to the Baskerville estate, dies on the moors, apparently of fright after seeing a “gigantic hound.”  Sir Charles’ doctor, knowing that the new heir Henry is due to arrive, fears some repetition of the incident and hires Holmes to preserve Henry’s life.

The film follows most of the peregrinations of Holmes (Peter Cushing) and Watson (Andre Morrell) as they investigate a wealth of mysterious doings around Baskerville Hall.  The only significant deviation from the novel is that early in the film Henry Baskerville is menaced by a tarantula.  While I imagine the filmmakers threw in this development to escalate the sense of visible danger, its inclusion telegraphs to the audience the likelihood that a merely mortal villain is behind the skullduggery.
Cushing and Morrell make a good though not exceptional Holmes and Watson, but Christopher Lee proves unable to abandon the hauteur that he brings to most of his roles, and fails to make Henry either vulnerable or likeable.


The greatest transformation relates to the villains behind the phantom Hound—which itself proves unimpressive in the climax, since the filmmakers did not manage to give the creature any sort of ghostly appearance.

In the novel, the villains are the yeoman Stapleton and his wife Beryl, who could be easily viewed as recapitulations of the yeoman and his daughter who are victimized by the reprobate Hugo, and who have “come back to life” to victimize Hugo’s descendant. But the novel's Stapleton passes off Beryl as his sister rather than his wife so that she can vamp Henry, though the two conspirators come to a parting of the ways by novel’s end.  In the film, the girl is one Cecille (Marla Landi), who is Stapledon’s daughter who merely pretend that her father is a tyrant in order to deceive the new lord of the manor. Unlike Beryl, Cecille is very vocal about gaining vengeance upon the exploitative aristocracy.  She not only vamps Henry, she also claims that she did the same to the previous lord Sir Charles, in order to lure him to his death.  Cecille also tries to kill Henry durintg the climax, only to be foiled by the actions of Holmes.

It may be that the greater villainy of Cecille was merely a contrivance to boost the appeal of actress Landi.  However, her recriminations against the aristocracy are not dissimilar to other Hammer transformations of classic horror concepts, wherein the aristocracy usually comes off poorly, particularly 1958’s CURSE OF FRANKENSTEIN.  Interestingly, in the opening sequence Hugo calls the innocent girl he kills a “witch,” and this HOUND ends with a very witchy villainess taking over from the male villain, and celebrating her evil on the same deconsecrated grounds where the original maybe-Satanic sacrifice took place.

Posted by Gene Phillips at 2:31 PM
Email ThisBlogThis!Share to TwitterShare to FacebookShare to Pinterest
Labels: phantasmal figurations (u), the uncanny