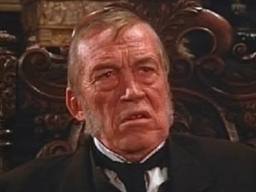 For a character conceived to fit a very specific time, place, and genre, Sherlock Holmes has proven remarkably agile in leaping into new variations on all three.  However, in respect to his phenomenality Arthur Conan Doyle’s creation was quite variable, which may have made it easier for the reader to think of Holmes in altered circumstances.  Though the majority of the Doyle stories possess a naturalistic phenomenality, one tale, “The Adventure of the Creeping Man,” takes the plunge into the marvelous subject matter of SF, while a fair number of stories, particularly the famed “Hound of the Baskervilles,” follow the tropes of the uncanny.


The telemovie SHERLOCK HOLMES IN NEW YORK follows the uncanny pattern, though only in a marginal respect.  Though NEW YORK is fairly versed in the Sherlockian mythos, it does not attempt to follow the prose tales’ story of the master detective’s encounters with Professor Moriarty.   At the start of the film, Holmes, having decimated Moriarty’s organization, confronts his nemesis (John Huston) in the crimelord’s house.  Moriarty demonstrates to the detective that the house is tricked-out with a small assortment of death-devices—a throwing-knife trap, a falling chandelier—but then he promises that he has worse plans for Holmes than simply killing him.  The villain flees London, and when Holmes is called abroad to consult on a robbery case in New York, the hero finds that Moriarty has preceded him there.


Moriarty’s revenge would be unthinkable in the world of Conan Doyle, wherein Sherlock Holmes seems to remain a celibate bachelor all his life.  NEW YORK’s script imagines that Holmes’ admiring relationship with the opera-star adventuress Irene Adler went a good ways beyond mere admiration.  As a result of a tryst between Holmes and Adler, she conceived a son, now about five years old, without Holmes’ knowledge.  Holmes is forced to back off the case lest his kidnapped son be killed.  Naturally Holmes finds a way to regain his natural offspring, after which Holmes and Irene Adler part without seriously considering a permanent reunion.  The Holmes-Moriarty battle concludes back in London, where Holmes must run the gamut of the death-dealing Moriarty house before coming to grips with the fiendish professor.  There’s enough emphasis on the action-sequences that I feel justified in labeling this one “adventure” rather than “drama.”


Both the action and the detective-work are better than average, though nothing especially memorable.  Roger Moore does decently with the ratiocinative work, though at many points he still seems to be playing a more gung-ho hero along the line of the TV “Saint.”  Charlotte Rampling makes an attractive Irene Adler, though she displays none of the cleverness of the original, and John Huston makes a good, vengeance-obsessed criminal genius.  The character of John Watson is horribly underwritten, giving Patrick MacNee nearly nothing to do. 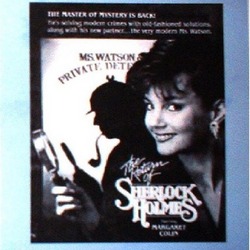 Just as NEW YORK becomes uncanny through just a few marginal elements, THE RETURN OF SHERLOCK HOLMES is marvelous by nature of just one device: a cryogenic device that allows Sherlock Holmes (Michael Pennington) to circumvent death in his Victorian era.  He awakens in the 1980s thanks to the ministrations of private detective Jane Watson (Margaret Colin), the great-great granddaughter of Sherlock Holmes’ sidekick.  The script devotes no great attention as to how Holmes acquired/invented a cryogenic device in his era.  Once the setup is done, the remainder of the story stays within a naturalistic sphere, as Watson involves Holmes in one of her cases.


The nature of the crime proves of negligible interest; the script’s emphasis is on the “odd-couple” pairing of the crime-solvers.  What makes the mythicity of RETURN higher than average is that there’s a little more here than the standard “fish-out-of-water” schtick, though the telefilm incorporates many of these.  The setup for Holmes’ frozen time-travel is odd, for though he relates that he successfully killed Professor Moriarty in the Victorian era, just like in Doyle's story of Moriarty's demise, the detective is infected with a fatal disease by Moriarty’s twin brother.  Since neither Moriarty nor any descendant thereof appears in the film, clearly the writer could have just had the original Moriarty infect Holmes.  Why bother with the “twin brother” explanation?  Possibly because the villain’s rationalized resurrection provides a mirror to that of the hero?


The relationship of Holmes and the new Watson is also psychologically intriguing.  In the original Watson, Holmes had something of a “little brother,” constantly following him around and marveling at his elder’s perspicacity.  But upon being brought back to life in another era, this Holmes becomes as a little child, and Watson becomes something of a harried mother, trying to guide him through the complexities of the twentieth century.


That the script is aware of this irony is testified by the fact that it doesn’t propose any romantic interest between Watson and her precocious charge.  Instead, during the case Watson receives some attention from a handsome young FBI agent.  Holmes’ reaction is at first jealous in a childish manner.  Later he makes an attempt to set them up, as if in childish curiosity about what goes on between men and women.


The film’s most amusing scene carries a certain irony.  During an investigation Watson tells Holmes not to enter a certain storefront, because it’s an adult bookstore.  Holmes loftily replies, “Well, I’m an adult,” and goes in—only to emerge moments later with a stunned expression on his face.  The irony of the scene is that in the real Victorian world (if not Doyle’s version of it) pornography flourished. Of course a time-traveler from Holmes’ era might have been repulsed by the sheer explicitness of modern porn, but not by pornography itself.  The tenor of the scene suggests rather than Holmes hails from a more “innocent” time—which was not entirely the case. 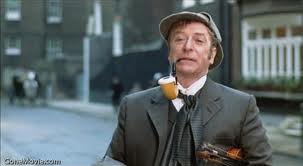 WITHOUT A CLUE, the naturalistic Holmes-tale in this trio, reinvents the canon as a species of baggy-pants metafiction.  Doyle experts will know that the author was himself a practicing physician, before Sherlock Holmes’ stories boosted him into prominence as an author, and that in later years Doyle—also an amateur detective on occasion—complained that his association with Holmes harmed his career.


On that peg CLUE’s script hangs the notion that Doctor John Watson (Ben Kingsley) invented the character of Sherlock Holmes as a cover for his own detecting activities, which he thought might imperil his standing as a physician.  He also wrote stories about Holmes so persuasively that all of London came to believe in the detective’s existence.  To maintain the illusion of Holmes’ reality, Watson was obliged to hire an out-of-work actor (Michael Caine) to pretend to be Holmes and take the credit for Watson’s accomplishments—which happen to include foiling the schemes of crime-czar Moriarty (Paul Freeman).


Watson mightily resents the alter-ego he’s created, especially since the reality of the august “Holmes” is a low-class fellow who chases skirts and racks up gambling debts.  For his part, the actor hates being forced to mind his P’s and Q’s all the time.  Thus Watson’s fiction births yet another “odd couple” of crimefighters, constantly quarreling yet being forced to fight crime thanks to the expectations of the audience.


CLUE has some funny bits, and it shows more than passing awareness of the canon.  For instance, it includes John Clay, the villain of “The Adventure of the Red-Headed League,” cast here as a minion of Moriarty.  However, CLUE’s script offers only a shallow take on the relationship of “Watson-figured-as-Doyle” and “Holmes-figured-as-fictional-construct.” The nature of Moriarty’s big scheme—which Watson and Doyle succeed in solving together, to show how well they end up influencing each other—proves eminently forgettable, and little is done with the fact that Moriarty alone realizes that Holmes is a fraud and that Watson is the villain’s real foe. The flick is a pleasant enough comedy, but as far as real psychological insight, the movie doesn’t have a CLUE.
Posted by Gene Phillips at 2:48 PM
Email ThisBlogThis!Share to TwitterShare to FacebookShare to Pinterest
Labels: combative adventures, combative comedies, delirious dreams and fallacious figments (n), diabolical devices (u), the marvelous, the naturalistic, the uncanny