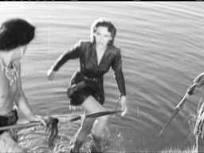 
JUNGLE GIRL is a fairly engaging Republic Studios jungle-serial, though it’s nowhere near the best offered by the director-team of William Witney and John English, whose repertoire includes many of the best-regarded serials-- not least JUNGLE GIRL’s one sequel, PERILS OF NYOKA. JUNGLE’s success with exhibitors not only made the sequel possible.  Its success may have encouraged the very small spate of heroine-focused serials of the 1940s, such as DAUGHTER OF DON Q (1946) and THE TIGER WOMAN (1944), and helped spawn a NYOKA comic book that lasted about six years—which is a bit surprising given that the first version of Nyoka isn’t a very dynamic heroine.

To be sure, she’s more formidable than most of the female characters created by Edgar Rice Burroughs, whose 1931 novel is credited as the source of the serial.  The title is the only thing the serial has in common with the Burroughs novel, which includes one of Burroughs’ least memorable, most wimpy lead females.  This was par for the course for Burroughs, who rarely created forceful female characters—making it ironic that one of the few action-heroines created for classic Hollywood was credited to his inspiration.  Patently the filmmakers wanted a female Tarzan designed according to their needs, since the “girl” of the title, Nyoka Meredith (Frances Gifford), is seen doing such Tarzan-ish feats as killing lions and crocodiles and swinging through the trees.  Her skill-set is more naturalistic than Tarzan’s, though, and the only animal she commands is a trained elephant.  Her attire—a belted mini-dress with leoapardskin trimmings—just barely edges into the category of the “outré outfit,” in that it’s not quite as unusual as Tarzan’s “au naturel” appearance, but it’s not ordinary attire either.

The jungle-environment in which Nyoka operates is strange enough to justify the uncanny version of the “exotic lands and peoples” trope.  Nyoka, who assists her father’s medical outpost in the heart of Masai country, falls afoul of a group of white treasure-hunters out to despoil a horde of diamonds in the vicinity of a tribe called the "Masamaba" (note the resemblance to the real name of the "Masai" people, who deified lions as the fictional tribe does).  Nyoka’s father wants to persuade the African natives to use their wealth to construct a new hospital.  The thieves find a way to work around his popularity with the natives.  The villains kill Doctor Meredith and enlist Meredith’s crooked twin brother to take his place, in order to get past the Masamba's defenses.  These defenses include various “outré devices” set to discourage trespassers, not least being that old Republic favorite, the Flooding Room.

Very few serials of the period depicted heroines who could fight.  It was a commonplace notion that any time a fight-scene broke out, any female characters would get shoved to the ground, where they would bump their heads and immediately pass out for the length of the scene.  Perhaps one could deem this a roundabout chivalry.  But though Gifford’s Nyoka gets knocked out a few times, she’s allowed a few scenes where she vanquishes male opponents with a judo-toss or the like, to say nothing of her most impressive scene, where she kills a lion with a knife.  To be sure, she’s dressed in a concealing lionskin at the time, which takes away some of the aesthetic pleasure.  However, most of the punchups are handled by Nyoka’s male helper Stanton (Tom Neal).

As with most serials there’s no real plot: just a series of machinations on the part of the villains to get what they want, against which the heroes respond with due heroics.  The potential for a dramatic encounter between Nyoka and her evil uncle is tossed aside, for though the heroine comes to suspect her “false father” in the last few chapters, the uncle is rubbed out by his evil partners.  In addition, the main villain, the one most responsible for the killing of Nyoka’s father, is killed not in a battle with Nyoka but with her "stand-in" Stanton.  In terms of sociological mythicity that so often infuses African-jungle tales, we see once again the trope in which African resources become a “bone” over which good whites and bad whites contend.  Still, JUNGLE GIRL generally treats the African natives without belittlement or condescension—which is more than one can say of PANTHER GIRL OF THE KONGO. 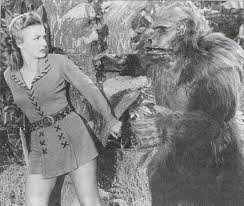 PANTHER, one of Republic’s last chapterplays, was crafted with an eye toward recycling footage from JUNGLE GIRL.  To that end, actress Phyllis Coates played a new character—Jean Evans, nicknamed “Panther Girl” for no explicit reason.  She’s usually seen wearing an outfit identical to that of Nyoka Meredith, so that the filmmakers could re-use any scenes that didn’t clearly show the face of Frances Gifford.  The main plot again revolves around getting diamonds, although the new script injected overt SF-elements.  A group of lawbreakers desire to scare both natives and “good whites” away from a diamond mine, so their leader Doctor Morgan creates an enlarging-ray and turns loose super-large crayfish to menace the locals. Since these locals include wildlife photographer Jean Evans and her friend big game hunter Larry Sanders, they end up battling Morgan’s thugs—though neither Morgan nor his oversized crawdads appear very often.

Sadly, though the original photography is crisp enough to match the re-used footage, and some of the original action-scenes are decent, the filmmakers chose not to give their Panther Girl even the minor fighting-skills of Nyoka Meredith.  Discounting scenes in which Panther Girl duplicates the feats of Nyoka—chiefly the lion-killing scene—Jean Evans succumbs every time to the old “head-bump/ instant faint” schtick, bowing out so that Larry can do the fighting.  Phyllis Coates gives the role as much heroic stature as she can manage under the circumstances, but on top of getting knocked out so often, Jean screams an awful lot.  She’s at least handy with a rifle or handgun, but rarely if ever does her skill as a markswoman save the day.

In this scenario the African natives are either passive helpers or impediments.  Early in the story, prior to the white characters finding out that the giant monsters feared by the natives are for real, one of the whites remarks on the “superstition” of the Africans.  The giant crayfish are of course merely normal-sized specimens given the usual rear-projection, and were probably added in imitation of the proliferation of giant-monster sf-flicks in the period.

Posted by Gene Phillips at 1:26 PM
Email ThisBlogThis!Share to TwitterShare to FacebookShare to Pinterest
Labels: combative adventures, exotic lands and customs (u), outre outfits (u), the marvelous, the uncanny