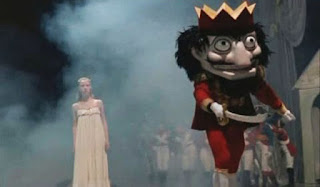 
As my ability to judge ballet goes no deeper than "I know what I like," I won't make any detailed analysis of this 1986 stage-performance, except to say that I liked it.  For the most part the film is a filmization of a stage-performance of the traditional Tchaikovsky ballet.  There are one or two scenes that look to have been filmed separately and added in.  For example, when heroine Clara awakes from her long dream, the camera shows a vertiginous "fall" that could not possibly have been duplicated on a stage.  I speculate that this and any similar scenes were the work of renowned animation director Henry Selick, who is credited with "visual adaptation" while Carroll Ballard receives the actual directing credit.

As the image above shows, this is an extremely sumptious production, with costumes and sets given input by renowned author Maurice Sendak.   The psychological subtleties of Clara's dream, as she charts a course toward burgeoning maturity in her encounters with giant mice and the titular nutcracker-soldier, follow the standard patterns; evocative for those unfamiliar with them, but not especially noteworthy otherwise.

My main reason for referencing this film is because it provides an illustrative contrast to what I wrote about the movie HANS CHRISTIAN ANDERSEN:

In my phenomenological system, a film qualifies for the status of “uncanny” if it presents dreams with such fidelity that they have their own reality within the film’s diegesis. HANS CHRISTIAN ANDERSEN does not do this. The challenge-daydream doesn’t maintain any level of fantastic verisimilitude, nor does the ballet. In terms of my system, a bunch of stage-players enacting a play with fantastic content uses my trope “delirious dreams and fallacious fantasies” purely in a naturalistic manner, since in such scenarios the real-life framing-story nullifies the fantastic content.

This film, and any films which present the story of Clara's dream in this manner, qualify for the uncanny version of the trope "delirious dreams and fallacious figments."  Here we see dancers performing on a stage, but they do not break from the diegesis of the story, in contrast to a similar scene in the Danny Kaye film.  Were the dancers maintaining the same unbroken diegesis for a story that was marvelous rather than uncanny-- say, for the "Little Mermaid" story used in the Kaye film-- then that film would still be marvelous, for all that the audience could see that the performers were only costumed dancers.

Posted by Gene Phillips at 3:35 PM
Email ThisBlogThis!Share to TwitterShare to FacebookShare to Pinterest
Labels: delirious dreams and fallacious figments (u), the uncanny