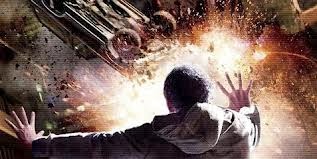 I  believe I have a pretty good idea as to why dozens of online reviews choose to refer to CHRONICLE as a "superhero" film. Indeed, I rather admire the cleverness of one review-title that calls it "the world's first found-footage superhero film."

But it isn't a superhero film, because CHRONICLE has no heroes as such in it.

On my literary-theory blog I've argued extensively as to what factors make a central character a "hero," but rather than quoting myself ad infinitum I'll just cite a dictionary-definition to which I subscribe for the word:

HERO: a man of distinguished courage or ability, admired for his brave deeds and noble qualities-- Dictionary.com.


Of the half-dozen online dictionaries I checked, most cited something similar as their primary definition.  It's true that there are other definitions, such as one in which "heroes" are simply the principal characters of stories-- but I don't really think this is what most people have in mind when they use the word "superhero."

Though I enjoyed CHRONICLE, Max Landis' script is fairly simple in comparison to, say, Shyamalan's 2000 film UNBREAKABLE.  Though the performances and FX are affecting, the plot lends itself to simple summary:


In the city of Seattle three high-school guys-- social outcast Andrew, his diffident cousin Matt, and big-man-on-campus Steve-- encounter a strange artifact.  The object's radiation unleashes in them a wild array of telekinetic powers.  They take great glee in experimenting with their powers while keeping them secret from their classmates and adult society. Inevitably, one of them, outcast Andrew, goes too far, lashing out first at people who have bullied or even just annoyed him.  In a rage Andrew kills Steve. Matt vacillates about what to do as Andrew grows more and more violent and capricious. Finally, when Andrew goes berserk in the middle of downtown Seattle, Matt finally uses his powers publicly to try to rein Andrew in. Finally Matt kills his insane cousin and uses his own power to escape the authorities to far-off Tibet.


CHRONICLE is justly famous for its climax, an extensive fight-scene in which Matt and Andrew smash through windows and generally wreck Seattle.  Similar scenes appear in many inarguable superhero films, from 1980's SUPERMAN II to 2011's GREEN LANTERN.  However, they also appear in films like this one:

It's because of films like WAR OF THE GARGANTUAS that I formulated my theory of the "combative mode." There are many films that can include two powerful entities smashing their way through a cityscape while they fight, but no one suggests that GARGANTUAS-- which focuses on the destructive enmity between two colossal monster-brothers-- is a superhero film.

It may be that the "origin story" is one that also points audiences toward the tropes of the superhero story.  But origin stories are common in most metaphenomenal narratives, such as the 1959 sci-fi film 4D MAN. In my review I noted how the main characters' sibling rivalry manifested in monstrous consequences: 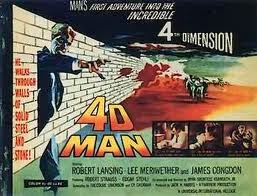 The underlying structure of CHRONICLE is not that of "heroes vs. villains," which is the dominant structuring trope of superhero narratives.  Rather, that structure is far closer to that of "monster vs. monster" as seen in WAR OF THE GARGANTUAS.  Alternately, one might choose to view only the psychotic Andrew as a true "monster" who parallels Scott Nelson of 4D MAN, while the more grounded character Matt-- a far more empowered version of the "Tony" character of the 1959 film-- fulfills another function.  I have termed this function the "demihero," which in most instances connotes a character who is capable of "brave deeds" but who usually fights as a last resort.  To repeat my opening argument, I don't think that this is the connotation of either a "superhero" or any more naturalistic version of a "hero" in the primary sense, where "courage and ability" are linked to "noble qualities."


Andrew doesn't need to be debated as much: structurally, he is a "monster" after the same fashion of dozens of other mutated human beings like the 4D Man. CHRONICLE's principal difference from the standard "super-humanoid" narrative is that in such works the monster's nemesis-- say, the narrator Utterson from Stevenson's JEKYLL AND HYDE-- does not share center-stage with the monster.  In CHRONICLE, despite the un-monsterish looks of Andrew and Matt, they do share center stage as much as the good monster and the bad monster from GARGANTUAS.  Though my quick summary doesn't mention it, Andrew and Matt are meant to play off one another rather than just being monster and nemesis.  Matt is relatively well adapted to his environment, though the script makes clear that he's far from perfect.  Andrew, in contrast, is the textbook example of "the road not taken:" saddled with a drunken father and an ailing mother, he's an accident waiting to happen.  Max Landis' script is stronger on setting up melodramatic situations than on the internal dynamics of the characters.  The closest Landis gets to invoking that deeper level is that at one point Andrew becomes leery of what the power is doing to him, and he plays with the idea of flying to Tibet in search of "peace." Matt discourages him, trying to help him adapt to high-school life, but in the long run this proves a huge mistake. At the end Matt atones for the mistake by seeking out Tibet himself, though since he's exposed himself to the world as a "miracle teen," his motive isn't purely about lighting a symbolic candle to his cousin.

In closing I'll say that Landis and director Josh Trank do bring more humanity to the improbable subgenre of the "found-footage" film than I've witnessed in works like 2008's CLOVERFIELD and 2011's SUPER 8.

Posted by Gene Phillips at 3:18 PM
Email ThisBlogThis!Share to TwitterShare to FacebookShare to Pinterest
Labels: combative dramas, the marvelous