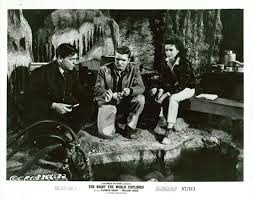 
Though Jules Verne's JOURNEY TO THE CENTER OF THE EARTH is a good read, and it generated a better-than-average 1959 film adaptation, I don't generally like adventures involving characters blundering around beneath the earth.  In cinematic terms, most of them make for dull viewing, even when they have a superior script, as with 1956's THE MOLE PEOPLE.

That said, Fred F. Sears' rockhound-drama THE NIGHT THE WORLD EXPLODED is an appealing enough melodrama, which debuted in US theaters on a double-bill with what I deem Sears' best film, THE GIANT CLAW.  Brilliant seismologist David Conway comes up with a machine that can predict earthquakes while in collaboration with fellow scientist Doctor Morton and comely lab-assistant Laura Hutchinson-- usually called "Hutch," for short. Conway detects an earthquake-threat and tries to warn the governor, who isn't convinced by the verdict of an untested device.  Conway, Morton and Hutch, seeking out the source of the quake-tremors, ferret out the existence of a explosive new element, "Element 112," which tends to expand with such rapidity that it causes explosions. Soon Conway and company discover that unless all sources of the element are neutralized, eventually 112 will imperil the entirety of the planet Earth.

To put things bluntly, there's not a lot of exciting action as the scientists seek answers, though on occasion Element 112 keeps things lively by blowing someone up.  However, the script skillfully emulates the standard cosmological motifs of 1950s SF-cinema, noting that the places where 112 is the greatest threat are those locales where man has plundered the earth of its bounties, thus weakening the earth's crust. One might call NIGHT a mineral-oriented version of the "nature's revenge" theme usually exemplified in the 1950s by giant ants, spiders, and of course, outer-space gooney-birds.  Given that scripters Jack Natteford and Luci Ward spent most of their careers writing western films-- though Ward has a couple of minor metaphenomenal credits-- the team does a better-than-average job of evoking the 1950s "awe in the face of nature" theme.

They also do fairly well with another standard theme of 1950s SF-films: the theme of "woman's place in the brave new science-world." Early in the film Hutch, a scientist only through by virtue of associating with pedigreed researchers, is not as strong a figure as the actual female scientists seen in films like IT CAME FROM BENEATH THE SEA.  She's principally motivated by the attractions of home and hearth, for early in the film Hutch tells Morton that she plans to quit the project and marry her boyfriend-- one never seen in the film, and clearly second choice to her real love, the oblivious Doctor Conway. Morton counsels Hutch to cool her heels and wait for the love-thunderbolt to strike Conway.  As it happens the impending doom of Earth comes along just in time to cause Hutch to table her decision.  Naturally over time Conway does realize his affection for Hutch, and even buys her perfume at one point.  However, feminists will not rate NIGHT highly, given that there's a scene in which the scientific group goes spelunking, and Hutch becomes frozen with terror on a rope-ladder.  One may argue that Conway's response is motivated by "tough love" of a sort, though it does so by humiliating Hutch for her womanly qualities:

Wouldn't you know a woman would pull a stunt like this? You're all scientists until there's the slightest bit of danger, then you fold up! Want your mommy and daddy?


That said, Hutch does "man up" and make the descent, allowing her to continue helping the project, if only in terms of moral support.  Eventually the rockhounds save the earth and turn their attentions to concerns of biology.  But though Hutch chooses motherhood over science, her will to work alongside the traditionally male science-types should not be passed over.  If NIGHT isn't as strong in this department as some 1950s SF-flicks, it beats others by a mile-- particularly THE INCREDIBLE PETRIFIED WORLD. 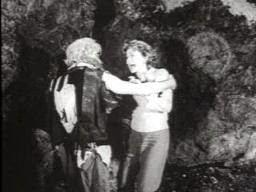 PETRIFIED actually starts out in terrain closer to Verne's 20,000 LEAGUES UNDER THE SEA, as a four-person crew seeks to test a diving-bell in the depths of the ocean.  The cables holding the diving-bell snap, but the crew-- two oceanographers (one male, one female), a scuba-diver and a female reporter-- don't plunge to the briny bottom of the sea.  They end up on a subsea shelf, and upon exiting the diving-bell, they encounter a series of air-filled caverns.  They learn that the caverns lead to a dead volcano, but their attempt to find a way out is complicated by a big lizard-- possibly intended to be a monitor-- and a half-mad castaway who has been marooned in the caverns for fourteen years.

Director Jerry Warren later became famous for his tedious SF-outings, and PETRIFIED is definitely one of his worst.  The four actors trundle around the subterranean sets, while above-ground the designer of the bell (John Carradine) muses philosophically about the failure of his invention, never seeming particularly mournful about the supposed deaths of his collaborators.  The only attempt at drama in John W. Steiner's pokey script is that reporter Dale (Phyllis Coates) gets a "dear Jane" letter before making the descent. Thus, despite the peril to her life during their adventure, Dale spends most of her time being bitchy to the expedition's other female, Lauri.  Apparently Lauri raises Dale's hackles because Lauri has some romantic future in her life, but Lauri refuses to be baited. As if to punish Dale for her nasty feminine jabs, the bedraggled castaway takes a shine to her and proposes that they do away with the others and life together as man and wife. Dale's punishment for Not Being a Nurturing Female is interrupted by a volcanic eruption, which kills the castaway and sets the expedition-members on the road to their escape.

The only slight merit of this film-- which is technically a work of "the uncanny," since a cavern with trapped oxygen in it is hardly "marvelous" in nature-- are Dale's rants about not having a man in her life, which may say more about the film's authors than about the status of women in 1950s SF-films.

ADDENDUM: I happened to read an interview in which Warren mentioned that he had intended to put a standard under-earth monster into the cavern, which shows that the film originated as a SF-vehicle. However, the costume Warren had was so damaged that even this legendary schlock-meister would not put it on camera.


Posted by Gene Phillips at 3:47 PM
Email ThisBlogThis!Share to TwitterShare to FacebookShare to Pinterest
Labels: exotic lands and customs (u), the marvelous, the uncanny