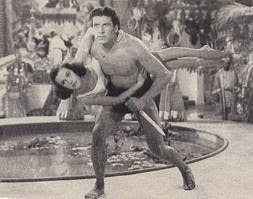 
TARZAN'S REVENGE-- which really doesn't center on the ape-man taking "revenge" on anyone-- is said to be "based on a novel by Edgar Rice Burroughs." I suspect that this was producer Sol Lesser's roundabout way of adapting elements from both the first Tarzan novel and from MGM's far more successful launching of its Tarzan-franchise, 1932's TARZAN THE APE MAN.

Like the classic MGM film, a great deal of the film centers on the reactions of the heroine to the fantastic persona of Tarzan; like the Burroughs book, the heroine comes to Africa with members of her family.  Before we meet heroine Eleanor (played by swimming-medalist Eleanor Holm), we meet her nasty fiancée Nevin.  Though Eleanor's father has come to Africa to take live captive animals back to an American zoo, Nevin can't resist taking pot-shots at any animal that comes in his gunsights.  When the audience also learns that Nevin was picked-out by Eleanor's Boston-Brahmin mother, this in itself is enough to condemn Nevin as a no-good.

Eleanor has more in common with her father: both of them are curious about the exotic world of Africa.  While traveling aboard a cruise-ship, Eleanor's curiosity is aroused by another passenger: a wealthy Arabian chieftain named "Ben Ali Bey." When she presumes to look in on Bey's cabin, the Arab sees and admires her.  He pays her court by sending her jewels, proving the old adage that "when you look at the jungle, sometimes the jungle looks back at you." Bey seals his status as a villain when he thrashes a clumsy porter in Eleanor's presence; she responds by swiping his cane and whacking him with it. This seals her fate: Bey arranges with a dissolute guide to have the zoo-expedition guided toward Bey's jungle-bailiwick.

The first half of the film is more concerned, though, with showing what a rotter Nevin is: not only does he continue shooting animals, he's weak and cowardly as well. Instead of helping Eleanor when she gets trapped in a mud-hole, he runs off to get the porters to do the heavy lifting.  This of course sets things up so that Tarzan, the "real man's ape-man" is primed to come down and rescue Eleanor-- though no one in the expedition believes her story of a mysterious near-naked rescuer and his pet chimp.  Though the chimp is never called "Cheetah," this one's comic relief is no less tedious than that of the MGM ape.

Tarzan also rescues Eleanor when she falls afoul of a lioness, whom Tarzan spares because the animal was only seeking its cubs.  Finally Tarzan finally performs his "jungle seducer" function and abducts Eleanor from her group.  In contrast to the strong erotic vibe of the first couple of MGM Tarzans, this production downplays the romance angle, though the ape-man and his quasi-Jane do indulge in a little healthy swimming together.  When Eleanor's worried father and the rest of the expedition find her again, she memorably says, "At first I was frightened, but after that I really believe I began to enjoy myself!"

In the rather dull climax, Bey makes his move and abducts Eleanor for real, intending to make her part of his harem. Tarzan rescues her and hurls some of the pursuing black natives into the mouths of hungry crocodiles. Eleanor throws over Nevin for Tarzan, and the disgruntled fellow tries to pot-shot Tarzan. The ape-man roughs him up, and Eleanor remains in the jungle while her family goes back to America with their captive animals (something the MGM Tarzan probably would not countenance).

REVENGE is a good basic Tarzan film that boasts an attractive heroine and some decent commentary on Nevin's slaughter-happy tendencies.  Its biggest problem is the actor playing Tarzan. Like Eleanor Holm, Glenn Morris made his mark as a champion swimmer.  But he lacked charisma, even the rough sort of personality seen in Johnny Weismuller's initial outing, so it's not surprising that Lesser, who made many more Tarzans, never called upon Morris again.

Posted by Gene Phillips at 4:29 PM
Email ThisBlogThis!Share to TwitterShare to FacebookShare to Pinterest
Labels: exotic lands and customs (u), outre outfits (u), superlative skills (u), the uncanny