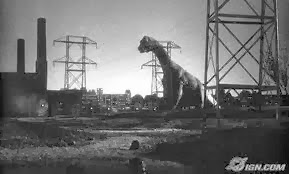 
1959's BEHEMOTH--THE SEA MONSTER, as the film was originally titled, was Eugene Lourie's return (albeit as co-director with Douglas Hickox) to the giant-monster genre he helped birth in America, THE BEAST FROM 20,000 FATHOMS.

In my review of BEAST, I noted that its script strenuously avoided placing any bad light on the nuclear technology developed in the United States. Perhaps because BEHEMOTH was initiated by an English production company, the film opens by stating the dangers of nuclear-waste pollution, resulting in schools of dead fish being washed up on English shores.  As if to make this more adversarial viewpoint go down more smoothly in the States, this marine peril is forecast by two leading scientists: Karnes, a young American, and Bickford, an older Englishman. The film even starts with a warning note, as the film's narrator shows men in radiation suits walking eerily through a nuclear test-site.

Religious motifs are worked into the story at an early point: the titular behemoth comes ashore in Cornwall with all the dead fish, and kills a Cornish fisherman with its radiation.  Before the man dies he gives the beast its name, drawing on the Bible. Interestingly, at his funeral the officiating priest invokes the topic of the Biblical Behemoth in connection with Job. It may be worth remembering that in the Book of Job that "upright man" is arbitrarily cursed by God.  This is not a point that the priest dwells upon, but it is one relevant to the notion of nuclear devastation as a figurative "wrath of God."
Like BEAST and many films of similar stripe, BEHEMOTH avoids showing the monster in its earliest sequences.

There are some aspects of the film's narrative that suggest that Lourie or other filmmakers had screened GODZILLA, and that in response they sought to make the Behemoth more mythic in an European sense-- and not only because of the Biblical references.  The monster "paleosaurus," unlike the 20,000 fathoms-fiend, has been mutated by the atomic bomb that woke him, so that where he once possessed only a simple biological ability to discharge electric shocks, now he can emit energy-waves laced with radiation. The image isn't as dramatic as Godzilla's fire-breath, but the extra power means that the Behemoth is able to put up a pretty good fight against the armies of menwhen it invades London, thus making this a "combative drama."  The creature even has a contest with a group of electrical towers (see above), a scene which somewhat resembling Godzilla's original contention with an electrical barrier.  But even saying all this, once the Behemoth begins its rampage it loses most of the mythic resonances suggested by the early parts of the film. It soon becomes, unlike Godzilla, just a big quarrelsome animal.  Even Karnes and Bickford, critical of the consequences of nuclear brinksmanship, just want to see the big beast snuffed.

Only BEHEMOTH's conclusion returns to the tone of the opening moments.  Unlike the basically optimistic endings of most American big-monster flicks, BEHEMOTH ends with the warning that the whole beastly process may begin all over again-- possibly yet another story-trope cadged from the monsterpiece known as GODZILLA.
Posted by Gene Phillips at 3:46 PM
Email ThisBlogThis!Share to TwitterShare to FacebookShare to Pinterest
Labels: combative dramas, the marvelous