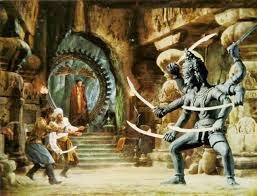 For a long time, the temporal order of the three Charles Schneer-Ray Harryhausen films was the same as their order of merit: first 1958's SEVENTH VOYAGE OF SINBAD, followed by 1973's GOLDEN VOYAGE OF SINBAD and then 1977's SINBAD AND THE EYE OF THE TIGER.

But now that I've recently screened the latter two back-to-back, I'm less sure as to which should rank #2.

On specific aspects of these films, some of my opinions remain unchanged.  None of the Sinbads in these three films have any history in common-- that is, each story starts over from "0" and makes no attempt at connecting with one another, but all three heroes are portrayed use the same adventurous archetype.  Kerwin Matthews of SEVENTH VOYAGE, who begins the story as an adventurer committed to marry a princess, gives the best performance, followed by John Philip Law of GOLDEN, who plays the hero with a wry air of fatalism and ends up affianced to a former slave girl.  In TIGER Patrick Wayne's Sinbad, once more in love with a princess, gives a performance as wooden as his ship's deck, though to be sure the script gives him little to work with.

The Harryhausen SPFX follow a similar path.  Though I get a stronger feeling of "movie magic" from SEVENTH than from GOLDEN, the latter's wonders-- the six-armed Kali statue and the cyclopean centaur-- are just as admirable as the cyclops-satyr and the dragon from the former film.  In comparison, the designs for TIGER's monsters-- the titular saber-toothed tiger, the Minaton (Minotaur-Automaton?)-- are less inspired, and suffer, as Harryhausen himself said, from being "rushed."

All three stories are stories deal with a group of heroes seeking some prize or treasure that a villain or villains also seek, although SEVENTH deals with a villain who forces the heroes to take him to his goal and so forces them to seek the prize in self-defense.  GOLDEN's plot deals with two ships in search of a fabulous fountain of riches, which gives the film a considerable resemblance to Stevenson's TREASURE ISLAND.  TIGER follows a similar structure, though the heroes have to seek two separate goals: first, seeking out a scholar to guide them, and second, taking his advice on seeking out the fabled land of Hyperborea.  All three films sport magicians who attempt to gain power through a trope one might call "the assault on royalty:" Princess Parisa is shrunk to doll-like proportions by Sokurah, the Grand Vizier of Marabia is disfigured by Koura, and Prince Kassim is turned into a baboon by Zenobia.  In all three films the defeat of the magicians returns the figures of royalty to normal status and so insures that they will be able to rule well.  Of the three, only the Grand Vizier-- who is the only link to proper temporal power following Koura's destruction of a royal house-- receives his rulership without being "born to the purple."

In the departments of writing and directing, however, I may not have given TIGER its due.  When Harryhausen's creatures aren't on screen during GOLDEN, the visual set-ups credited to Gordon Hessler are often static and uninvolving.  In contrast, TIGER's director Sam Wanamaker shows a great facility with close-ups, and perhaps Wanamaker may have appreciated them since he himself was an actor.  Thanks to such expressive close-ups, I found myself far more intrigued by the characters' difficulties, despite the fact that all the actors were giving very broad portraits of unalloyed good and evil.

I don't know the method by which Harryhausen would lay down the essentials of his SPFX-spectacles. so that a professional writer could then arrange them into a screenplay.  That said, Brian Clemens' script is often lazy and uninspired.  Many of the purely human scenes-- Sinbad setting Marianna free from servitude, or the sailors' teasing of their new shipmate Haroun-- fall flat despite having a lot of character potential. 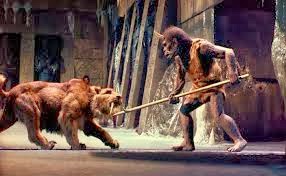 In contrast, though writer Beverley Cross wasn't working with material as resonant as he did in 1963's JASON AND THE ARGONAUTS and 1981's CLASH OF THE TITANS, he gives his simple characters a great more diversity, with the exception of Sinbad, who is like Perseus of TITANS something of a thickwit.  Cross gets a great deal of character mileage out of the way various characters react to Kassim's status as a baboon.  This status even ends up working to the benefit of the heroes, when the ape-ified prince is able to enlist the help of another "ape-man," a horned troglodyte predictably nicknamed "Trog." The rather boring "A-story" of the love between Sinbad and Princess Farah is superseded by the "B-story" of a blossoming relationship between Kassim and Dione, daughter of the scholar Melanthius.  Amusingly, their relationship is initially more like beast and keeper, a la 1949's MIGHTY JOE YOUNG, but enough tenderness develops that it carries over when Kassim recovers his human status.  Trog also has a certain Kong-like effectiveness missing in the rest of the monsters. Finally, though the evil witch Zenobia is a routine Morgan Le Fay type, seeking to overthrow the rightful rulers in order to put her son Rafi on the throne, the witch and her son at least have different skill-sets: Rafi is the master of mechanics who builds the Minaton, while Zenobia brings it to life with her magic-- one of TIGER's most mythic scenes.


I should note that a number of motifs from GOLDEN VOYAGE seem derived from 1940's THE THIEF OF BAGDAD-- the use of eye-motifs, a multi-armed idol, a bunch of savage green natives.  However, GOLDEN doesn't use any of these to any great effect.  But then, THIEF is one of the greatest magical fantasy-films of all time, so it's no stain on Harryhausen's career not to have reached those heights.

I suppose, though, that the performance of the villain shifts the weight back toward GOLDEN.  Tom Baker's Koura is simply a lot more fulsomely evil than Margaret Whiting's Zenobia, though Baker does get somewhat better dialogue.  GOLDEN may even have had greater influence on pop culture, since reputedly Baker's perf led to his indelible role as "Doctor Who," while the most influence TIGER has had is a possible contribution to one of ROCKY's themesongs.
Posted by Gene Phillips at 3:41 PM
Email ThisBlogThis!Share to TwitterShare to FacebookShare to Pinterest
Labels: combative adventures, the marvelous