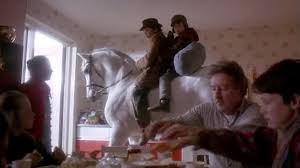 Though many of the films I've listed under the trope-category "phantasmal figurations" deal with things like phony supernatural phenomena, I specified in my essay on the 1948 HAMLET that the trope could also take in any narrative in which there was some ambivalence about what the phenomenon was. In that essay I held forth on the reasons I thought the academic Todorov was wrong to see such films as subsumed by the world of reality:

Todorov's original category [of the uncanny] encompasses works in which phenomena that seem fantastic are proven to be either delusions or a mortal-made hoax, his most dominant examples being the fake horrors of Radcliffean Gothics. In my conception, Radcliffean Gothics still evoke the affectivity of the metaphenomenal in spite of the fact that it's proven that the ghost is actually Uncle Ephraim in disguise. Further, my "uncanny" also takes in many works Todorov placed in his transitional category "the fantastic," in which the reader/audience cannot be entirely sure whether or not to take the fantasy-material at face value. What the "ghost of Uncle Ephraim" of some imaginary Gothic and "the ghost-or-maybe-devil" of HAMLET have in common is a similar affectivity; of something that seems wondrous but which does not, in the end, have the same boundary-altering effect on the mortal realm that "the marvelous" does.


At the same time, I have to ask, are there times when "the big reveal" doesn't sustain the feeling of the wondrous, but instead does purely return us to the realm of the naturalistic?  By the logic of my argument, all of the tropes I've formulated should have both naturalistic and uncanny versions, but to date I've only isolated one naturalistic version of the trope, the 1943 LEOPARD MAN-- and this is not a good parallel to the example of HAMLET, where something supernatural does seem to be going on but the audience never knows just what. Perhaps Shakespeare's RICHARD III would be a good contrast, since the audience doesn't tend to believe that the spirits seen by the titular character are anything but his fevered imaginings.

INTO THE WEST, though, presents a more modern example of the "ambivalent uncanny," where one may be able to read the narrative in a naturalistic fashion if one pleases, but where the narrative is oriented toward presenting something wondrous despite that possible reading. I won't deal in depth with the psychological ramifications of the film's characters, except to say that the basic plot resembles that of Disney's THE THREE LIVES OF THOMASINA. In THOMASINA as in WEST, the audience is introduced to two children who have a troubled relationship with a widowed father, and who seek to gain deliverance from this uncomfortable situation though a relationship with a beloved animal.

But where Disney's Thomasina is a cat who can think as coherently as a human, one never entirely knows what the strange white horse "Tir Nan Og" is.  The juvenile heroes of the story, older brother Tito and younger brother Ossie, receive the horse from their grandfather, who is aware of his son's mordant outlook. Unfortunately, the ownership of the horse comes into question, and the police become involved. Tito and Ossie flee civilization on the back of the strange white horse, forcing their father to abandon his mourning and show his concern for the living. As a bonus, this upset of conventional mores brings about the father's union with a possible replacement for the boys' lost mother, just as a similar plotline did in THOMASINA.

Tir Nan Og never demonstrates any marvelous powers or capacities, not even the ability to act as if he understands human ways. But at times he disobeys his young masters, carrying them where he pleases despite their protests. No one in the film mentions the myth of the Celtic pooka, a fairy-horse with a reputation for carrying its riders into fairyland-- i.e., death. But it's hard for me to believe that the writer had no knowledge of this tradition, when the film climaxes with the horse making straight for the sea with his young riders. The boys' father appears on the scene and saves them from this fate, while Tir Nan Og disappears into the waves. Since the audience never actually sees a strongly naturalistic denouement, in which the horse is proven to be nothing but a horse washed away in the tide, INTO THE WEST maintains the sense of a wondrous thing that alters our familiar boundaries, even if there is no proof that anything marvelous has occurred. Not so the 2009 film ONDINE. This film also deals with Celtic/Germanic folklore, and if anything excels WEST in terms of its lush photography of Ireland's natural beauties.  But it's a good example of a work in which the possibility of the marvelous is raised in such a way that it is ultimately discredited.

An Irish fisherman named Syracuse, out trawling for fish with his nets, finds a strange, stunningly beautiful woman caught in those nets.  She calls herself "Ondine" but offers no explanation as to why she was swimming about in the ocean. Syracuse takes Ondine back to his home, but she begs him not to reveal her presence to anyone-- a typical enough request for a creature of faerie.

Syracuse obeys her request, keeping her hidden from most of his Irish village, including his drunken ex-wife Maura (note the name, a homonym for certain words meaning "the sea.") But his precocious young daughter Annie discovers Ondine. Annie, who suffers from kidney disease and can only get about in a motorized wheelchair, takes note of Ondine's mythical name and begins wondering if she is really a "selkie," a Celtic version of a mermaid, one who becomes human only when she takes off her seal-skin.  In addition, Syracuse notices a strange man in the village, and is apprehensive when Annie tells him that most selkies have husbands in their ocean-world.

Ondine herself does little to build up her mythic persona; both Syracuse and Annie want to believe it, perhaps to escape their own mortality and limits. However, in the end it's revealed that Ondine's name is the only thing mythical about her. She is in reality a Romanian drug-mule who lost her last shipment. She fled to Ireland to escape her vengeful bosses, but the stranger in town spots her and brings in his confederates, resulting in a fight between the drug-runners and Syracuse.

The film's script, then, invokes supernatural beauty only to dispel it in favor of the naturalistic beauty of both the mortal Ondine and Ireland, which becomes her adopted land. Naturalistic love is also preferred as well, as Syracuse has fallen in love with the woman, not the myth. Annie receives two non-magical gifts: a better "mother" to replace the old one, and a new kidney, which becomes available, very indirectly due to Ondine's presence in the village. ONDINE is a very enjoyable romance, if one can penetrate the thick Irish accents of the players, but in no way does it belong in the category of the uncanny.