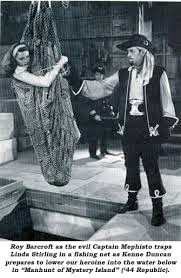 
Though I have to rate the mythicity of both of these serials as "poor," that's not to say that they tried and failed to get into deeper symbolic waters. Most sound serials made no such attempt, and when a serial does manage to touch on such matters, it often feels like it's by accident, as with the 1940 GREEN HORNET, reviewed here.

MANHUNT ON MYSTERY ISLAND is a typical Republic serial, which means that most of the narrative involves knockabout fight-scenes of fairly bland heroes against colorful criminal masterminds. In this case the villain is Captain Mephisto, fulsomely played by long-time character actor Roy Barcroft, in a role that many serial-fans deem his best outing.  Many serials feature villains who masquerade as upstanding citizens while they assume some cowled identity as they send out henchmen to commit crimes. Considering that Mephisto appears in 1945, he's refreshingly old-school in that he's not funded by some foreign power. Rather, he's a solo player: a fellow who just happens to be a descendant of a 19th-century pirate named Captain Mephisto, and uses this identity to get hold of a super-weapon with which he can force all nations to pay him tribute.  He somehow acquires a "transformation chair" that can make anyone who sits in it into a "molecular duplicate" of the original Mephisto, resulting in many "teaser" scenes in which the villain enters the room with the chair, his true identity obscured by the camera's reticence, only to metamorphose into Mephisto.  Despite the use of the Goethean name, Mephisto doesn't have any particular devilish associations, except that he's more fun to watch than the dull heroes. Richard Bailey plays Lance Reardon as just one more tedious private detective, though to modern ears certain associations of his name might prove a source of amusement. His leading lady-- a typical professor's daughter who hires the private dick to find her missing father-- is no better characterized, but she's more winsomely played by Linda Stirling, best known for being one of the few heroines to essay action-heroines in serials. Though by 1945 Stirling's best serials-- THE TIGER WOMAN and ZORRO'S BLACK WHIP-- were behind her, the scripters at least allow her character to be a deadly shot with a handgun.

In short, the "manhunt" for the professor and his super-dingus is just an excuse for lively fistfights, which no company did quite as well as Republic. 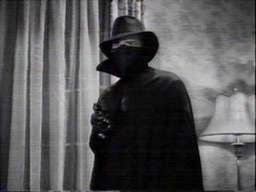 1940's THE SHADOW shows a little more interest in character over combat, as well as using more of the pulp hero's mythology than did a lot of serials that adapted pre-existing material.

To be sure, Columbia's scripters changed a number of Shadow-myths. The hero's secret ID of Lamont Cranston is a "criminologist" rather than a wealthy bon vivant, and the viewer never knows why he chose to take on the masked identity of the Shadow in the first place. He never uses any of the deceptive tricks of the Shadow, either the misdirection-maneuvers of the pulp stories or radio's "power to cloud men's minds." On the plus side, Victor Jory stands unchallenged for the honor of playing the best film version of the dark avenger. True, the limits of a serial budget mean that there's nearly no use of the hero's sinister aspects. The Shadow is usually seen in well lighted scenarios, thus negating a lot of the costume's appeal, and he more often punches out his opponents rather than shooting them. However, it makes up for a lot that Jory utters a haunting laugh that is worthy of the character's reputation-- unlike, for instance, the forgettable chortle that emerges from Alec Baldwin's lips in the overblow 1994 SHADOW film.

The hero's accomplices sport the same names as characters from the pulps or the radio series-- Margo Lane, Harry Vincent-- but they're pretty interchangeable "hero-stooges," though it's a mark of distinction that this version of Margo has some training in forensic science. The serial's villain, the Black Tiger, is one of many villains who display some limited form of invisibility; in the Tiger's case, he only turns invisible when he's barking out instructions to his henchmen-- in what may be the most unique villain-voice in serials, since he sounds like he's passing a gallstone every time he talks. Just as in MANHUNT, there's a death-ray weapon that the Tiger's after, though naturally most of the battles between hero and villains are low-tech until the final clash of the Shadow and the Tiger.

Strangely, during that clash the Shadow doffs his disguise to reveal his Cranston identity to the Tiger, seconds after Cranston has unveiled the villain's true ID. This is a pretty rash move to make if you plan to take an evildoer alive, but maybe Cranston had a psychic flash-- in the form of reading the script-- and knew that the Black Tiger was going to be accidentally-- and conveniently-- killed in the final struggle. Following this, Cranston tells Margo that he doesn't plan to play the costumed crime-fighter any more. I assume that if the studio ever harbored thoughts of producing a sequel, they would have simply ignored this coda.  As he did in many of his serials for Columbia, director James W. Horne and his writers tossed in a number of tongue-in-cheek scenes, the best of which allowed the lead actor to assume colorful identities while investigating the crooks' schemes. On the minus side, Horne had nearly no interest in cliffhangers, and THE SHADOW is notorious for a resolution in which the hero survives the roof collapsing on him, by merely getting up and dusting himself off.