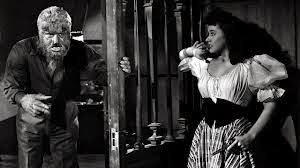 
Monster-kids never forget their first time-- at seeing a classic Universal monster-film. HOUSE OF FRANKENSTEIN was the first such film I saw, back in the dark days when one was almost entirely dependent on television reruns in order to view old films. To be sure, HOUSE might be deemed a "lesser classic" next to the seminal films from which it loosely derived: the DRACULA and FRANKENSTEIN films of 1931 and WOLF MAN from 1941.  Still, HOUSE does tap into some of the same depths of dark romanticism in which the greater classics are rooted.

The first sequel to Universal's original "monster mash" FRANKENSTEIN MEETS THE WOLF MAN shares with that film a strong opening, followed by a rather rickety plot. Unlike FMTWM, which I noted in my review was strongest in scenes dealing only with Larry "The Wolf Man" Talbot, the script by Curt Siodmak and Edward Lowe gives far more attention to the mix of characters-- though Siodmak's apparent disinterest in Frankenstein's creation may be the reason that the monster remains stuck on an operating-table for most of the film.

In FMTWM, Siodmak's tosses out a conflict in which Doctor Mannering becomes more interested in reviving the Monster rather than putting an end to the Wolf Man's sufferings.  This may be read as Siodmak loosely re-using a primary theme from his THE WOLF MAN script, in which protagonist Larry has a long-standing conflict with his father regarding Larry's "second-best" status next to his recently deceased brother.  No "sibling rivalry" theme ever appears as such in FMTWM, but such a theme does catch fire in HOUSE OF FRANKENSTEIN.

Evil Doctor Niemann (Boris Karloff) is, far more than the Monster, the real focus of HOUSE, even though he is only, as the script says, a "would-be Frankenstein." Instead of being the fey young man of the early Universal films, this "Frankenstein" is a white-haired "bad father," imprisoned for cavalierly performing experiments on unwilling participants.  Sharing his imprisonment is the hunchbacked killer Daniel (J. Carroll Naish), who becomes, like the hunchback from 1931's FRANKENSTEIN, the doctor's servant.  Unlike the earlier hunchback, Daniel serves the mad scientist because the latter promises to dole out his favor in the form of giving Daniel a better, more attractive body.  Daniel's longing sets the tone for HOUSE's emphasis on frustrated eros.

A freak storm sets Niemann and Daniel free, and by chance they come across-- and take over-- a traveling freakshow-carnival. Niemann hopes to combine his Frankensteinian aspirations with the pleasure of killing those who sent him to prison-- and since it's a short movie, he only goes after three victims, two men who testified against him and the burgomaster who sentenced him. Posing as the master of the carnival, he even brazens his way past Burgomaster Hussmann. Niemann's plan for vengeance against Hussmann isn't very clear, but once again Dame Fortune favors the mad doctor: he learns that the carnival's exhibit of Dracula's corpse is the real thing. Niemann makes a bargain with Dracula (John Carradine), promising to protect the vampire's coffin while he sleeps in exchange for the killing of Hussmann and the destruction of his family.  Dracula keeps his end of the bargain-- killing Hussmann though he fails to seduce the wife of Hussmann's grandson-- but Niemann callously exposes the vampire to sunlight in order to discourage a band of pursuers.  It's the first indication that Niemann is not a good person to make deals with.

While the only "frustrated eros" in the film's Dracula-section is that of Dracula's attempt to dominate a new victim, the next section makes this theme more central.  Niemann and Daniel arrive at the village of Vasaria, whose citizens managed to destroy Frankenstein's Castle with a dam-deluge that apparently also destroyed the Frankenstein Monster(Glenn Strange) and the Wolf Man (Lon Chaney Jr).  Niemann and Daniel providentially find the two monsters encased in ice underground, and thaw them out.  The Monster is too weak to do much of anything, but Larry Talbot isn't happy that Niemann has released him to "suffer the torments of the damned," i.e., to become a murderous werewolf again. Niemann placates Talbot with promises to cure him. In truth his next project, with Daniel's help, is to capture the men who testified at Niemann's trial. He plans to torture them by switching their brains with those of the Wolf Man and the Monster.

Fortunately, though there's a brief scene of Niemann operating on his victims-- possibly pickling their brains and putting them away for a rainy day-- the script sets this matter aside as Niemann continues futzing with the Monster. During the evil duo's stay in Vasaria, Daniel becomes infatuated with gypsy girl Ilonka. She, however, doesn't see the hunchback for dust, though she and Larry fall in love-- leading to a romantic tragedy when spiteful Daniel reveals Larry's werewolf curse.  This leads Ilonka to do what the negligent Niemann won't: killing the Wolf Man with a silver bullet to save him from further murders-- though she pays with her life in so doing.  Daniel, distraught at Ilonka's death, turns on the master who gave him nothing for his loyalty, and almost slays Niemann. The mad doctor is saved by the Monster, who apparently views Niemann as his only friend-- but then both the would-be Frankenstein and his pawn are doomed when torch-wielding villagers drive them into a deadly quicksand bog.

I've glossed over many details in this summary that would make my case for HOUSE's "dark romanticism." One is the scene in which Rita Hussmann is erotically fascinated by Dracula's world of the living dead.  Another is a Sade-like scene in which Daniel takes out his anger against Larry by whipping the helpless body of the Monster and cursing him for taking away the evil doctor's attention.  Strangely, though Niemann's hunger for vengeance is the motive force that assembles all of the monsters, his character is flat and not nearly as interesting in his megalomania as most of Universal's obsessed doctors.  Despite some strong early scenes, Karloff isn't able to do much with the character-- though unlike Glenn Strange, he doesn't have the excuse of being stuck on a table for most of the story.  Lon Chaney Jr., though guilty of some over-ripe line-readings, makes up for them with a pleasing romantic interaction with his gypsy girl, and John Carradine is at least imposing, for all that his Dracula is a bit too quick to trust Niemann. But in some ways J. Carroll Naish is the emotional linchpin of the story; though he's a deep-dyed murderer, he remains sympathetic as he mourns "the only thing I ever loved." Other familiar Universal actors-- Anne Gwynne, Lionel Atwill, Sig Ruman, and George Zucco-- add to the enjoyment.

And though this Universal monster-mash makes a strong appeal to eros, thanatos is never far behind, as seen in this memorable line by Talbot as he sums up his differences from the Monster:

"He only wanted life and strength-- and I only wanted death. And now look at us."
Posted by Gene Phillips at 3:25 PM
Email ThisBlogThis!Share to TwitterShare to FacebookShare to Pinterest
Labels: the marvelous