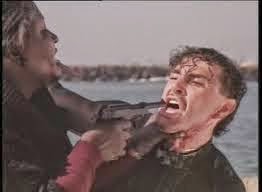 
On a film forum I posted the following about SURF NAZIS MUST DIE:

I've seen one review that includes NAZIS in the domain of fantastic films because it takes place in the "near future," another because it's "post apocalyptic." When I re-watched the opening scenes I didn't catch any reference to the story taking place in the future; merely that the entire California coastline has been devastated by a major earthquake, thus allowing weird cults of surfers to flourish unchecked. Even if the script had stated that the events took place in 1997, though, I wouldn't deem it a marvelous film. To me, if the society of a near future film looks pretty much like the society of the present, it's not science fiction just by virtue of being advanced a few years in time.

For similar reasons I discounted Jodorowsky's FANDO AND LIS for being genuinely marvelous, even though the film suggests that it may take place in a "post-atomic" world.

SURF NAZIS does qualify as a metaphenomenal film, though, in that the "weird family" of the Surf Nazis-- as well as a handful of similar surfer-gangs, like "the Samurai Surfers"-- go beyond the affective limits appropriate to a naturalistic depiction of modern neo-Nazis.  In fact, though a few of the titular nasties take the names of famous fascist figures-- "Adolf," "Eva," and "Mengele"-- the surfers are just punks playing Halloween dress-up.  Even the fact that one of the punks evinces a racist attitude when he kills a young black man doesn't really demonstrate that the Surf Nazis really identify with the ideals of Adolf Hitler.  Rather, they're just using the paraphernalia of Nazis to shock people-- kind of like director Peter George.

The idea for these colorful surfer-gangs almost certainly derives from Walter Hill's flamboyant 1979 film THE WARRIORS, wherein street gangs with bizarre costume-motifs attacked one another-- also a possible candidate for the uncanny phenomenality, though I doubt the film ever appears in most fantasy-film concordances.

SURF NAZIS disappointed many viewers who expected the exploitative title to be filled with over-the-top sex and gore, like many other Troma Film releases. The potential for ultraviolence is there: after the young black guy is killed, his enraged mother, portly Eleanor Washington, goes after the Nazis. Gail Neely gives a ripe performance as Eleanor, but not until the climax do we see much of her vengeance: most of the film's violence stems from the surfer-gangs fighting one another.

But though SURF NAZIS does not impress in these departments, I liked it a little more than the average balls-to-the-wall Troma release. Many of these films wear out their welcome with me quickly, but SURF NAZIS did not. Though it's just a superficial revenge-film, I admired George's facility with long shots of elegant surfers, as well as some occasionally evocative music from composer Jon McCallum.  I suspect that George's quasi-lyrical approach may have been influenced by Meir Zarchi's 1978 revenge-fantasy I SPIT ON YOUR GRAVE, particularly because the final scene-- referenced above-- shows Washington oddly pensive after she blasts a hole in Adolf's head.  This bears some similarity to the final scene of GRAVE-- though I must admit that McCallum doesn't end on the pensive note: Washington is last seen riding away on a motorcycle, laughing manically at her triumph.

I wouldn't call SURF NAZIS a "comedy," as most references do, although "black comedy" comes closer to the mark. But then, for me, "black comedies" are in essence the same as the form of the "irony," in which all virtue has absented itself from the world. True, Mama Washington has the moral high ground here, in comparison to the brain-dead surfers. But as with the protagonist of I SPIT ON YOUR GRAVE, she too has become defined by her quest for vengeance, and though she exits laughing, it's a laugh that rings hollow.

Posted by Gene Phillips at 2:51 PM
Email ThisBlogThis!Share to TwitterShare to FacebookShare to Pinterest
Labels: combative ironies, the uncanny, weird families and societies (u)