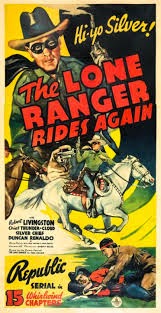 It will come as no surprise that both of these sequels to successful adventure-hero serials are inferior to the originals, respectively 1938's LONE RANGER and 1940's THE GREEN HORNET.  It's rare for a sequel to excel the original, though even in serials there is precedent, given that 1942's PERILS OF NYOKA easily trumps 1941s JUNGLE GIRL.

What is surprising is that of the two sequels, the Hornet proves more enjoyable by far than the Ranger. Devotees of vintage nerd-data should all know that of the two, the Lone Ranger was the first out of the gate, produced at the behest of radio entrepreneur George W. Trendle. The initial film serial seems to have been the first time the character acquired his memorable "slaughter of the innocents" origin, and was helmed by co-directors William Witney and John English, whom I still view as the "reigning kings of the sound serials," thanks to their felicitous collaborations on PERILS OF NYOKA, ADVENTURES OF CAPTAIN MARVEL and THE DRUMS OF FU MANCHU.  However, due to an inferior script featuring the hoary-even-back-then homesteaders-vs. cattle ranchers plot, and an unmemorable set of villains, LONE RANGER RIDES AGAIN is nothing more than by-the-numbers entertainment.  It even cadges its ending from the original RANGER serial, suggesting that the sequel was quickly thrown together to take advantage of the first one's success. 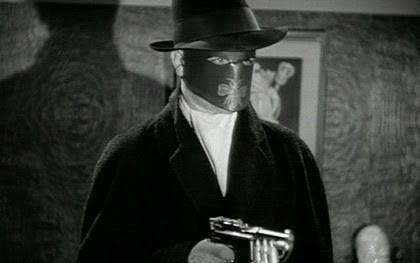 The mythos of the Green Hornet also originated under George Trendle's aegis, and as I commented in my review of the first serial, was something of a reversal on the Ranger-formula: whereas the Ranger donned a mask to become a symbol of justice, the Hornet donned a mask with the idea of becoming a "stealth crusader," pretending to be a crook competing with other crooks and "accidentally" sending them into the arms of Lady Justice.  I don't know whether or not the 1940 serial was the first to introduce the idea that the Hornet undertook his crusade as compensation for guilt-- a guilt that, to be sure, is passed over very quickly-- but it did give the original serial a little more psychological heft than one could usually expect from an adventure-serial.

In terms of villains the 1941 sequel is no better than the 1940 original: once again the Hornet and his aide Kato are pitted against a group of undistinguished racketeers-- which seems to have been a particular theme beloved by Trendle. However, it's generally more watchable than the Ranger sequel, perhaps benefiting from the crisp cinematography of Jerome Ash.  Of the co-directors responsible, one of them, John Rawlins, never worked on another serial before or after this one.  Senior director Ford Beebe had ample experience in serials, not only in the 1940 HORNET but about a dozen others as well. However, even Beebe's best serials-- probably 1936s ACE DRUMMOND and 1939's THE PHANTOM CREEPS-- don't come anywhere near the best of Witney and English. But the two Hornet films remains reasonably good entertainment even without strong villains, in part due to the Hornet's special gimmick of sending crooks into dreamland with a puff from his gas-gun.

An odd coincidence about the two sequels, respectively from Republic Pictures and Universal Studios: the non-white sidekicks get a little more action than in their first outings. Additionally, at least the actors were racially close the characters they portrayed, with Chief Thundercloud, self-identitified as a Cherokee, playing Tonto and Chinese Keye Luke essaying the once-Japanese-turned-Filipino valet Kato.
Posted by Gene Phillips at 1:52 PM
Email ThisBlogThis!Share to TwitterShare to FacebookShare to Pinterest
Labels: combative adventures, diabolical devices (u), outre outfits (u), the uncanny