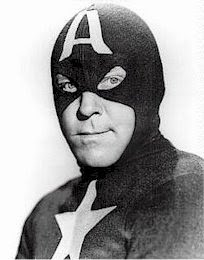 
Republic's 1944 adaptation of Timely Comics' Captain America is often slammed for some of the cosmetic changes to the hero: the elimination of wings from his cowl and of the hero's signature shield. What I find more peculiar is the casting of lead Dick Purcell. Given that Hollywood serials boasted many male actors who had jaws no less square-cut than that of the comics-character, why did they go with a fellow whose head is shaped like an egg? In terms of acting, Purcell is no better or worse than most of serial-actors, but in the terms of the image he presents, he's a strange choice for one of the last superheroes seen in chapter-plays.

It's also rather peculiar that, at a time when the Allies had not yet won WWII, one of the heroes most associated with fighting Nazis was occupied with battling an evil mastermind. The Scarab (Lionel Atwill) is concerned only with committing various acts of theft, and Captain America is not army private Steve Rogers, but fighting district attorney Grant Gardner. The previous year, Republic had pitted their original hero The Masked Marvel against Japanese saboteurs, so the company was hardly opposed to Axis-fighting. This Wikipedia article suggests that the serial was originally intended to be another project that was simply re-routed into a Captain America adaptation, but the truth may never be known.

As Republic serials go, CAPTAIN AMERICA is just fair. It delivers a decent collection of hard-hitting fights and exotic death-traps, and Purcell is nicely doubled by stuntman Dale Van Sickel. Female lead Lorna Gray, playing an aide to Gardner, is given a spunky characterization (at one point she fools a Scarab henchman into disclosing his identity) and has one shootout with a thug that ends badly for said thug. But for modern viewers the actor to watch is Lionel Atwill. No one could screw a monocle into his eye as malefically as could Atwill.

His character is also the principal source of the serial's meager psychological interest. His alter ego Doctor Maldor initially kills off the other members of a Mayan expedition because Maldor/Scarab thinks that they received greater monetary rewards than he did, though the serial doesn't waste much time detailing his grievances. The Scarab is essentially the figure of the Envious Brother, wreaking havoc on all those who received more than he did. He's also a figure of conspicuous consumption, since he's equally concerned with stealing pricey valuables and scientific weapons-- though unlike a lot of serial villains, he doesn't seem interested in selling weapons to foreign nationals.

It would interesting to know if the scriptwriters of the serial knew in advance that Atwill would be cast as the villain. The actor had already become strongly associated with the horror-genre from films like 1939's SON OF FRANKENSTEIN. Scarab's death-devices, whether created via his expertise with Mayan drugs or swiped from others, often have a macabre feel: "purple death" poison, a method for reviving the dead, and best of all, the concluding menace of the "mummifying gas." This theme certainly wasn't coincidence, for in the first chapter a newsman mentions that it's ironic that the villain has assumed this cognomen, since for "the ancients" the figure of the scarab symbolized eternal life. The film doesn't end with the villain dying in some explosion he might have conceivably escaped; instead, the film ends with the Scarab being executed for his murders at midnight, even though the film spares the audience from the sight of the villain's actual demise.

Posted by Gene Phillips at 1:48 PM
Email ThisBlogThis!Share to TwitterShare to FacebookShare to Pinterest
Labels: combative adventures, the marvelous