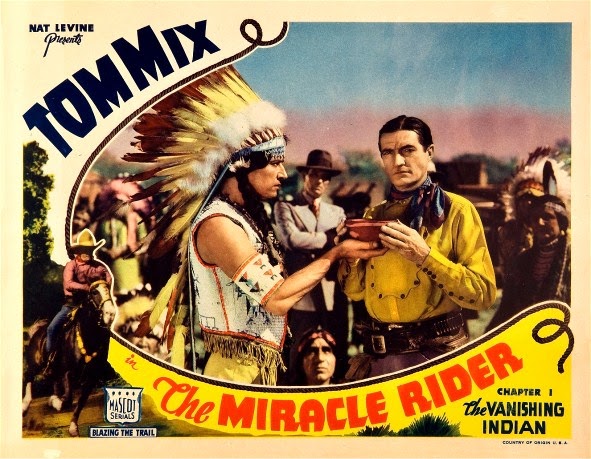 
Lately I've been giving some thought to the way American films and television movies depict the marginalization of the Native American by the white man.

One of the most familiar tropes in the western genre is that of the "Vanishing American," or, as the lobby card seen above has it, "the Vanishing Indian." It's been averred that one of the first literary evocations of the concept appeared in the works of Fenimore Cooper, the author who originated the subgenre sometimes called "the Eastern Western." This trope pays sentimental lip service to the downfall of the Native American, while it simultaneously avoids placing any moral responsibility on the people who made the Indian vanish, the ancestors of the dominant European-descended white man's culture. In this trope the Indian's fate of vanishing seems ordained by fate, rather than being caused by a rival human culture.

Closely related to "the Vanishing Indian" trope is the "Keep Them Indians Down" tropes. Hundreds of western films and television shows have featured western heroes-- usually white men, though occasionally they may be half-Indian or raised by Indians-- who are faced with the problem of keeping a tribe peacefully confined to a reservation, even though conspiracies by villainous white men have given the tribesmen every reason to go on the warpath. I don't advocate the Marxist notion that popular fiction is predominantly about enforcing social controls.  Still, after I watch about a half-dozen Lone Ranger episodes in which the Ranger and Tonto manage to keep a pissed-off tribe of Indians on their reservations, I find that the morals of these stories has much the same effect as the sentimental "Vanishing Indian" trope: keep the Native Americans in their place and you can forget about them.

At the same time, there have been Hollywood westerns that were more confrontational on the issue of social justice-- though it may come as a surprise that one of them is a adventure-serial, since serials are not exactly known for their exploration of sociological issues.

THE MIRACLE RIDER was one of the last sound serials produced by Mascot Pictures before that company was essentially absorbed by the Republic studio. It was also the last major feature of Tom Mix. America's first western star. Most of Mix's two hundred-plus films were westerns, but very few are readily available to film buffs. THE MIRACLE RIDER is the only Mix film I have seen, and it may well be the only one with metaphenomenal content.

RIDER is predominantly a fast-paced adventure film, but it does avoid one major pitfall of the "Keep Them Indians Down" trope. The action takes place in 1935, when there was no serious fear about a tribe of Indians going on the warpath. This time, the villains are seeking to make the Indians of the fictional "Ravenhead" tribe voluntarily move off their lands because those lands are rich with the equally fictional mineral X-94, a fantastic source of fuel-power.  The chief of these villains is Zaroff, played by Charles Middleton about a year before he earned serial immortality as Ming the Merciless in 1936's FLASH GORDON. Star-spotters may also enjoy seeing Jason Robards Senior playing one of Zaroff's flunkies. However, it's unquestionably Mix's film all the way, and although the actor was in his mid-50s at the time, he still displays considerable charisma as Tom Morgan, a Texas Ranger who follows in the footsteps of his father-- and several famed American heroes-- in championing the rights of the Native American. (More on those American heroes later.)

Though some of the behind-the-scenes personnel of RIDER would later work on the muddled DARKEST AFRICA, this serial has more in common structurally with the earlier Mascot serial LOST JUNGLE, in that both serials set up a loose but reasonably compelling situation, as opposed to the tendency of serial-scripts to become lost in a confusion of plots and counter-plots. While RIDER doesn't sport any bravura sequences that would stand with the best serial-scenes, it does come up with enough incident to keep things from becoming overly repetitious. Similarly, even though I have enjoyed the fight-choreography of the Republic serials-- what I like to call "clockwork brawling"-- it's also pleasurable to see Mix's hero, uh, mixing it up with the villains with more realistic fighting-moves: lots of grappling, rolling on the floor, etc.

For movie Indians, the Ravenheads are reasonably well done. Though the script isn't able to deal with issues like Native American beliefs about the sanctity of the land, it's at least clear that the Ravenheads like their home and don't want to pick up and leave. The chief Blackwing is the one who dubs Ranger Morgan "the Miracle Rider," though there's no justification for the title. Maybe the Indians have seen so few good white guys that Morgan is a "miracle" to them?  After Blackwing is killed by Zaroff's henchmen, a "bad Indian" named Longboat conspires with Zaroff so that when the tribe is moved off the valuable land, Longboat will become the new chief. In contrast to the evil Indian, Morgan is aided by a good Indian maiden, the daughter of Blackwing, who alone among the tribal people sports a Caucasian-derived name: that of Ruth. Though she's not a fighter, Ruth is reasonably spunky in pursuing villains. In the early episodes it's clear that Ruth has a thing for Tom-- Longboat complains that she's not interested in the men of the tribe-- but any romance is sidelined throughout the bulk of the serial. Oddly, at the serial's end, Ruth makes some broad hints to Tom about her being alone now that her father's dead. Tom's response is far from romantic: he suggests that she follow him to his new Washington post and become his secretary, and the film ends with a very un-passionate handshake between Ruth and Tom. But then, considering how many westerns depicted Indian maidens leaving their people for white suitors, maybe this is something of an improvement.

One of Zaroff's plans to drive them off the reservation is also one of the serial's two claims to uncanny metaphenomenality: the villain dresses up a radio-controller glider and flies it over the heads of the superstitious Indians, who fear that it's one of their totems, "the Firebird." Since this element in the film also involves an attempt to fake a supernatural presence, the glider counts as both a "phantasmal figuration" and an "outre device."

I should mention that the other metaphenomenal element is that of the fictional mineral X-94. I consider it an uncanny rather than a marvelous made-up mineral because X-94 doesn't really do anything fantastic; it's just a more efficient energy-source than gasoline. It also plays a role in creating peril for Tom Morgan. This serial doesn't sport many death-traps, but in one chapter Morgan is inadvertently trapped in a room with an engine that's about to explode due to the extra-powerful X-94 formula running through it.

I should also note that X-94 plays a part in the serial's happy ending: after Zaroff and his aides have all been defeated, the government takes over the mining of X-94, and implicitly makes all of the tribesmen rich by paying them a fair price for the mining rights. There is of course no opposition to the U.S. government getting access to the land, and RIDER takes it for granted that the proper authorities will deal more justly with the Ravenheads than the nasty fellow with the foreign name.

Though I enjoyed the fighting-and-shooting action, MIRACLE RIDER's most interesting facet appears in its introductory chapter. The audience is given a short, four-part history of white-Indian relations. In each segment, a virtuous white character counsels other white men against fighting the Indians over their land or their game, and each time the evil white men go ahead and do whatever they want, leading to wholesale carnage. The first three of the virtuous whites are Daniel Boone, Davy Crockett, and Buffalo Bill Cody, while the last one is the father of Tom Morgan, a Ranger killed in the act of defending an Indian from bad white guys, and who thus passes on his ethical sense of responsibility to his young son Tom.

Clearly, whatever these legendary figures were in their real lives, here Boone, Crockett and Cody are being portrayed as sporting enlightened views of the Red Man, the better to make a rhetorical point against the whites who treated the Indians unjustly. Today, when we see such a sequence, followed by an uplifting shot of the American flag superimposed over the United States of 1935, it's impossible not to wonder if such unification might have come about more because of the greedy whites than because of the virtuous paragons. Yet I think that the introductory sequence is about more than "social control." It feels more like "wishful thinking;" a writer's desire to imagine that Manifest Destiny could have been achieved without racial injustice.  Perhaps there's something similar going on in a lot of the "Keep Them Indians Down" stories: the wish-dream that the real-life Indian wars could have been averted as easily as they are in "Lone Ranger" tales.  MIRACLE RIDER, being a simple good guys vs. bad guys entertainment, can't deal with these social issues. But as far as avoiding some of the more condescending pitfalls of the western genre-- if only because the Indians don't really vanish, but get rich off their land-- RIDER is ahead of the pack.

Posted by Gene Phillips at 4:26 PM
Email ThisBlogThis!Share to TwitterShare to FacebookShare to Pinterest
Labels: combative adventures, diabolical devices (u), phantasmal figurations (u), the uncanny