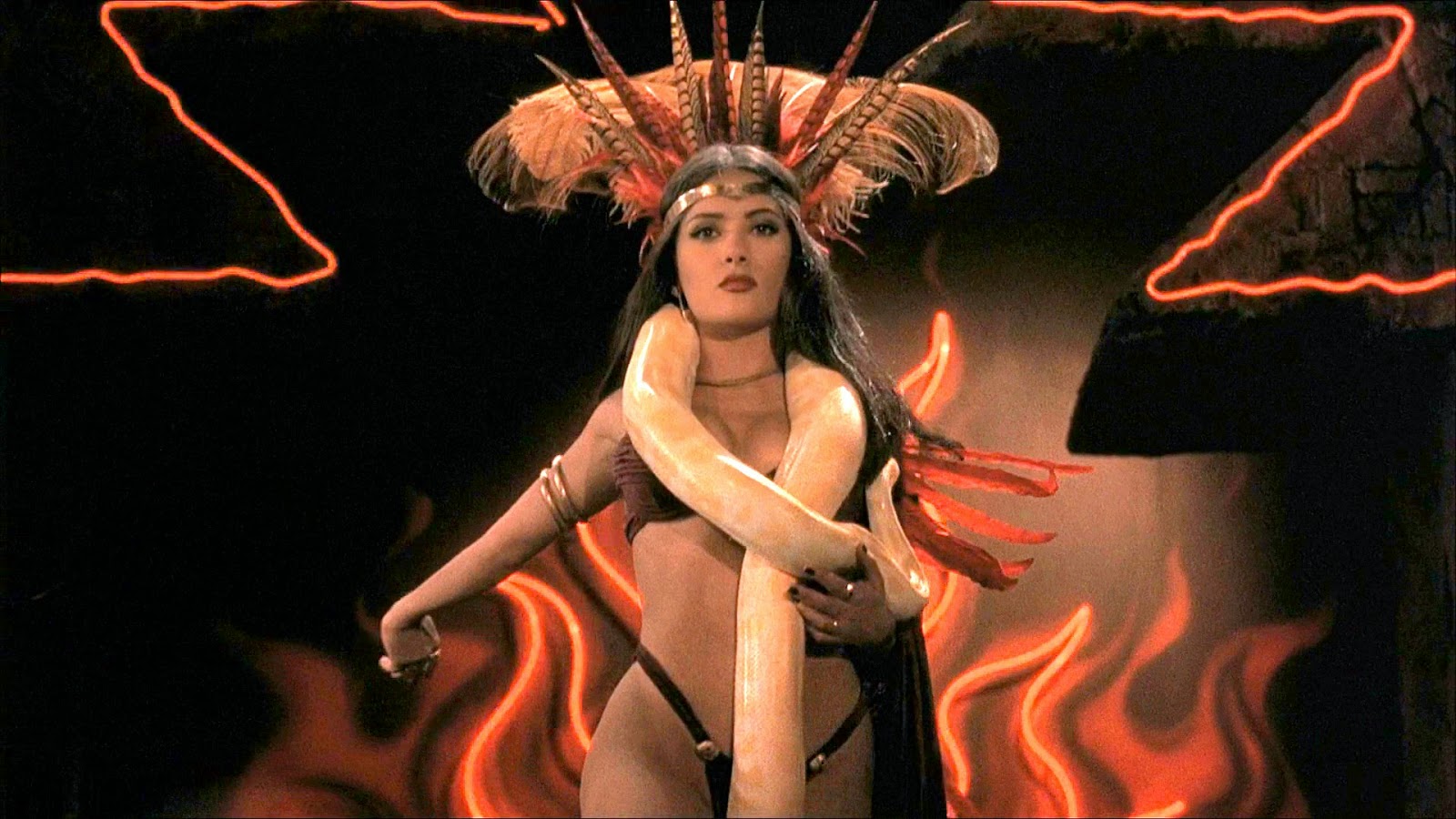 
The original FROM DUSK TILL DAWN is famous for the involvement of director-editor Robert Rodriguez and screenplay-scribe Quentin Tarantino. However, despite their unquestionable input, at base the original story by makeup/effects guy Robert Kurtzman is most concerned with producing as many crazy-ass prosthetic effects as a horror-fantasy can hold.

In 1996, watching DUSK on the big screen was a hoot. Almost twenty years later, the film doesn't hold up as anything but a series of cheap thrills, though the central idea remains appealing. A couple of tough crooks-on-the-run, holding a small family hostage, blunder into a Mexican titty-bar. The bar is run by vampires who prey upon truckers and bikers whose disappearances will presumably never be missed. The first half-hour plays like a mundane suspense-tale: will the innocent nuclear family-- lapsed preacher Jacob Fuller (Harvey Keitel), his daughter Kate (Juliette Lewis) and adopted son Scott (Ernest Liu) win free from the merciless gunmen Seth and Richie Gecko (George Clooney and Quentin Tarantino)? But the gangsters' success at fleeing the U.S. law into Mexico takes a PSYCHO-like turn as they find themselves immersed in a titty-bar version of the Bates Motel, where customers who check in-- well, you know.  There follows a series of fight-and-chase scenes, interrupted with a few dramatic moments, ending with a slightly ironic coda for the survivors of the firefight.

The first section shows the greatest attention to detail. The Gecko Brothers have a dysfunctional relationship: though Richie is responsible for breaking Seth out of jail, Seth is the more rational of the two, regarding himself an experienced holdup-artist who doesn't kill without necessity. Richie, however, is a dangerous psychotic given to imagining that his hostages are out to kill him or have sex with him-- and both scenarios lead Richie to commit gratuitous murders. Seth knows that his brother is crazy but remains loyal to him, hoping that they can retire to Mexico with their ill-gotten gains. In contrast, the Fullers are reasonably cohesive, even though Jacob's kids bust his chops a little about having given up his religious status. The script doesn't really explore the characters of Scott and Kate, though. The focus is almost entirely on Jacob's loss of faith due to the loss of his beloved wife, but in the Rodriguez-Tarantino universe, loss of faith can best be countered by becoming a kickass Warrior of God.

One of the main pleasures of DUSK the first time out was its gestures to earlier icons of adventure-cinema. John Saxon and Michael Parks don't get much to do, but Fred Williamson, who had not made a high-profile film in years, is fetishized for his status as a major adventure-icon. In the history of metaphenomenal films, Tom Savini's fame depends far more upon his skill with special effects than at acting. Still, though he had acted in other films prior to DUSK, in this film his semi-comic turn as tough biker "Sex Machine" raised Savini to the level of a minor character-icon in his own right. In fact, Savini's acting is better than Williamson's. The latter's image of extreme toughness descends into silliness when he rips a vampire's heart right out of its body.

Tarantino is reasonably good as the alternately whiney/hyperviolent Richie, but he only works because Clooney gives a more nuanced performance than usual. Jacob Fuller is the only character given a level of development approximate to that of Seth Gecko, but as noted above the Robert Rodriguez answer to "the silence of God" is really no more than a lot of noise.

The weakest link in DUSK, though, is the vampires. Because they're thrown into the plot in such a haphazard way-- as I argue above, as little more than an excuse for lots of FX-stunts-- there's no coherent vision of what these vamps can or can't do. The script gets some humorous mileage out of the fact that the humans defending their lives are desperately trying to figure out the nature of supernatural killers for the first time ever. But that said, there's no reason why some vampires keep semi-human forms, while others seem to be auditioning for ripoffs of NIGHTMARE ON ELM STREET. The central villain, Santanico Pandemonium (Salma Hayek), has a cool opening performance, but she's killed early on, after which the vampires are just a motley crew of monsters. 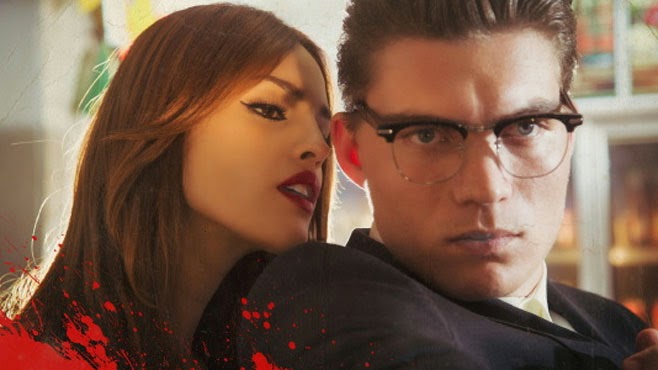 I would never have thought FROM DUSK TILL DAWN would have been improved by adaptation to another form, but the ten episodes of the 2014 teleseries do successfully confer greater depth on the sketchy characters and their background.


For one thing, in the film crazy Richie Gecko is largely defined by the degree of trouble he brings to his more sensible brother Seth, and his perverse hallucinations are nothing but indicators of his mania. In the teleseries, Richie (Zane Holtz) is in part crazy because, like a latter-day Renfield, he's responding to the call of a master vampire. Even before the Geckos cross the Mexican border, Santanico Pandemonium is calling out to Richie, and not until they arrive at the Titty Twister does brother Seth (D.J. Cotrona) realize what's going on with his brother.

Jacob, Kate and Scott are still present, but since two of them are doomed to die in the series just as they do in the movie, the Fullers are not given appreciably greater development. Other potential plotlines are expanded, as with a conflict between the Geckos and local Mexican gangsters, and a Texas Ranger named Gonzalez follows the Geckos into Mexico as well. But without question the greatest improvement is that the vampires are substantially re-thought. Their indebtedness to Aztec mythology is slightly suggested in the movie, but in the series, more information about the vamps is doled out by the character of Sex Machine, who is himself revised into a rather peculiar professor of mythological studies. The Mexican vamps are redefined as "culebras," and are said to be closer in nature to snakes than to bats. Since the teleseries isn't trying to drown the viewer in makeup effects, the result is the vampires aren't nearly as erratic in form or in function. Further, their occupation of the titty-bar is given a more metaphysical function.

The ten episodes of the series take the audience a series of events roughly paralleling those of the movie. The biggest change is that both Richie and Santanico (a fetching Elza Gonzalez) do not perish as they do in the movie: they get clear of the annihilation of the titty-bar and depart for new territory. Seth and Kate are again the only "good guys" to survive the vamp-holocaust, but in contrast to the film's conclusion, the two characters remain together, though they're not explicitly pursuing Richie and his vampire mistress. Presumably, since the series has been granted a 10-episode extension, all four will cross paths again, and new characters will have to be invented to take up the slack for all those that took the dirt nap.

Posted by Gene Phillips at 3:40 PM
Email ThisBlogThis!Share to TwitterShare to FacebookShare to Pinterest
Labels: combative dramas, the marvelous